"I feel like you're - like I know you," Donald Trump said to Karl Racine during remarks at the White House before a gathering of the National Association of Attorneys General. 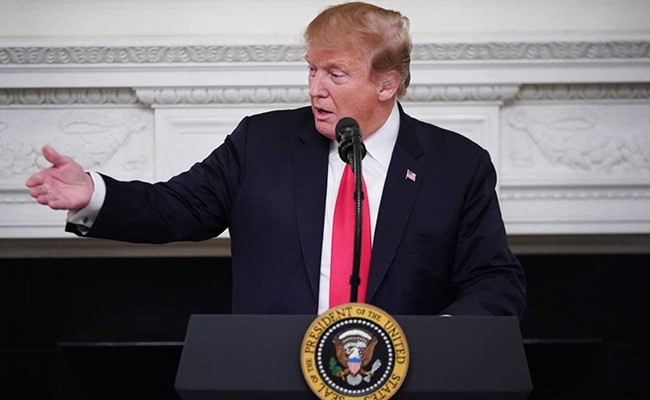 President Donald Trump on Monday afternoon ostentatiously complimented District of Columbia Attorney General Karl Racine, a Democrat who alleges in an ongoing lawsuit that Trump is violating anti-corruption clauses in the Constitution and just last week became the third law enforcement official to subpoena documents from the president's inaugural committee.

"I feel like you're - like I know you," Trump said to Racine during remarks at the White House before a gathering of the National Association of Attorneys General.

"I feel like I know you as well, Mr. President," Racine replied from the front row of the audience.

The pair's bizarre verbal volley left onlookers scratching their heads. Racine has been among the most aggressive of the multiple Democratic attorneys general confronting the Trump administration.

It follows on the heels of subpoenas from the U.S. attorney's office in the Southern District of New York and the New Jersey Attorney General's Office.

The exchange between Trump and Racine began when the president was discussing the First Step Act, a bipartisan criminal justice bill that Trump signed in December.

After thanking the association for its help with the bill, Trump singled out Racine.

"And a special thanks to Attorney General Karl Racine. Where's Karl? Karl? Karl? Hi, Karl," Trump said from his podium, pointing to Racine.

"Hi, Karl," he continued. "Great job. Thank you very much. You were very helpful. Everybody said - Karl - I feel like you're - like I know you. That's pretty good."

"I feel like I know you as well, Mr. President," Racine said, a line that brought laughter and applause.

In an interview after the event, Racine would not expand on the meaning of his response to Trump.

He said the president's address had capped a meeting between attorneys general of both parties and White House officials, including Kellyanne Conway.

Among the topics of discussion, Racine said, were programs to reduce recidivism in the District of Columbia and efforts by North Carolina Attorney General Josh Stein, a Democrat, to address the opioid epidemic.