The woman tried to place an order at the store in Lodi, California, according to the San Joaquin County Sheriff's Office. But by that point the boyfriend was nearby and demanded she use the drive-through. 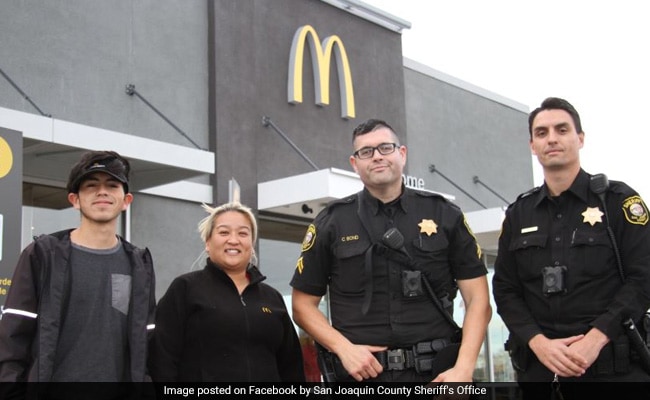 "We are lovin' it!" the sheriff's office posted on its Facebook page, playing off the McDonald's slogan.

The woman's boyfriend had threatened to kill her, police say.

So as they drove to visit the boyfriend's family, she told him she needed to use a restroom at a McDonald's - then told an employee at the counter to call 911 and gave her the car's license plate number, officials said.

The woman tried to place an order at the store in Lodi, California, according to the San Joaquin County Sheriff's Office. But by that point the boyfriend was nearby and demanded she use the drive-through.

"Help me," authorities say the woman mouthed to staff as the car went by the service window.

Deputies had just entered the store, the sheriff's office said, and employees hurried them outside to pull the couple over. Law enforcement arrested 35-year-old Eduardo Valenzuela on charges of making criminal threats, possessing stolen property and possessing a firearm illegally as a felon.

Valenzuela's lawyer did not immediately respond to inquiries Saturday morning. Jail records show him being held on $1 million bond with many charges of unspecified "prior serious felonies" in addition to those from the McDonald's incident, which took place this week.

The sheriff's office is promoting the drive-through arrest as the result of quick thinking by both the woman and employees at a McDonald's that has designated itself a "safe place" - one of more than 20,000 sites around the country that publicize themselves as spots where young people worried for their safety can get immediate help.

"We are lovin' it!" the sheriff's office posted on its Facebook page, playing off the McDonald's slogan.

Deputy Andrea Lopez, a spokeswoman for the sheriff's office, said she's glad that more businesses are training their employees to spot victims of abuse and quickly involve law enforcement. She wants to see more awareness of the Safe Place program, an initiative of a nonprofit organization called the National Safe Place Network. 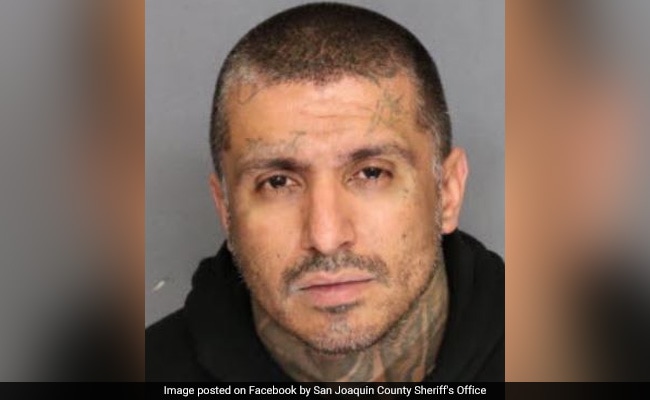 Eduardo Valenzuela had threatened to use that weapon on his girlfriend earlier in the day, Lopez said.

"Safe Place" sites, including stores, YMCAs and libraries, have black and yellow signs promoting their participation. Golden State McDonald's, which owns the Lodi location, explains on its website how employees will call an agency for assistance after a young person enters one of its stores and asks for help.

This week's encounter in Lodi was another example of staff members "doing their part in being A SAFE PLACE," Golden State McDonald's wrote on Facebook.

The woman who pleaded for employees to hide her was physically fine but mentally fragile as law enforcement comforted her, Lopez said. Valenzuela was "violent" with the girlfriend before, according to the sheriff's office, which has not shared the alleged victim's identity.

"She was frantic," Lopez said. "She was shaken while speaking to our deputy."

Deputies found a firearm stolen from out of state in the trunk of the car they pulled over, according to the sheriff's office. Valenzuela had threatened to use that weapon on his girlfriend earlier in the day, Lopez said.

The woman was smart to use a bathroom break to surreptitiously ask for assistance, Lopez said. A former child abuse and sexual assault detective, the deputy knows the value of finding a public space to broadcast distress.

"Public places are great to create witnesses," she said.

(Except for the headline, this story has not been edited by NDTV staff and is published from a syndicated feed.)
Comments
McDonald'sUS Woman