Even more rain is expected, state television said on Thursday, after average rainfall in the affected areas this week was recorded as 51% higher than in the corresponding periods of previous years, and the largest since 1961. 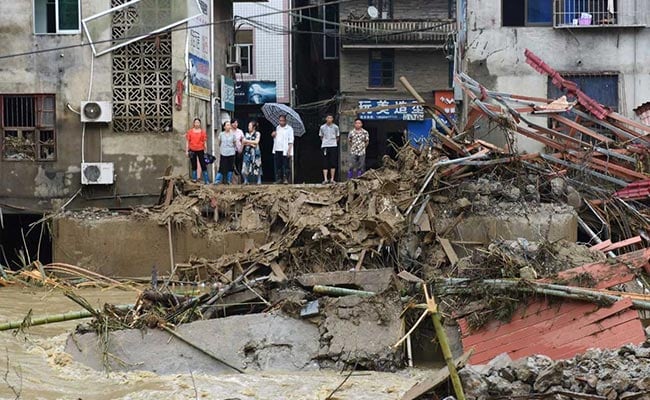 Residents stand on a bank of a river following heavy rainfall in Nanjing, Fujian. (Reuters)

The heaviest average rainfall to lash a swathe of southern and eastern China in more than half a century brought torrential rain and floods, destroying houses, damaging crops and forcing the evacuation of nearly 80,000 people, state media said.

Even more rain is expected, state television said on Thursday, after average rainfall in the affected areas this week was recorded as 51% higher than in the corresponding periods of previous years, and the largest since 1961.

State television showed images of half-submerged buildings and flooded streets in some of the worst-hit areas. Trains along the Beijing-Guangzhou railway were delayed after rising waters blocked a bridge in the southern province of Hunan, it added.

The affected areas include the southern provinces of Hunan and Jiangxi, eastern Zhejiang, the southeastern province of Fujian, and the northern parts of the southwestern Guangxi region.

The first three areas are expected to be doused again in a fresh burst of torrential rain on Friday and Saturday, weather officials said, along with the central province of Hubei, eastern Anhui and the province of Guizhou in the southwest.

The Yangtze River in Jiangxi is expected to exceed its warning level for the first time this year around Sunday, swelled by heavy rain that could last until Tuesday, state TV said.

Extreme weather is becoming increasingly frequent in China, with temperatures in some parts hitting records this year. Weather officials warned on July 3 that rainfall in the south could surpass the average by 30% to 70% over a 10-day stretch.