Wesley Allen Beeler, of Virginia, had driven to a checkpoint on Friday evening and presented officers with a fake inauguration credential, according to a document filed in Washington, DC Superior Court. 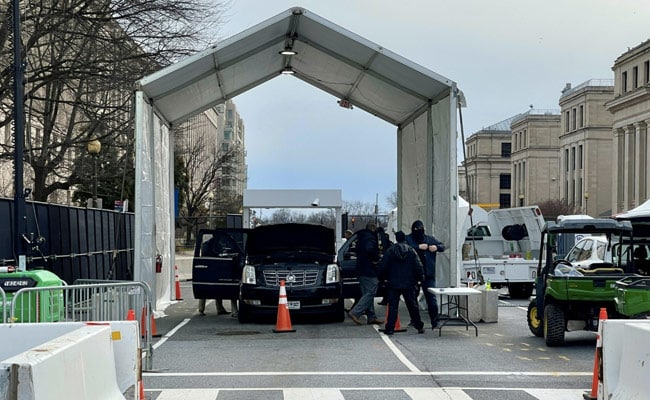 A checkpoint in Washington as preps made for Biden inauguration as the US President.

A heavily armed man has been arrested in Washington at a security checkpoint near the US Capitol, where he tried to use a phony credential to access the restricted area where President-elect Joe Biden will be inaugurated next week, authorities said.

Wesley Allen Beeler, of Virginia, had driven to a checkpoint on Friday evening and presented officers with a fake inauguration credential, according to a document filed in Washington, DC Superior Court.

As officers checked it against the authorized access list, one noticed decals on the back of Beeler's pick-up truck that said "Assault Life," with an image of a rifle, and another with the message: "If they come for your guns, give 'em your bullets first."

Under questioning, Beeler told officers he had a Glock handgun in the vehicle. A search uncovered a loaded handgun, more than 500 rounds of ammunition, shotgun shells and a magazine for the gun, the court document said.

Washington is under a high state of alert ahead of Biden's Wednesday inauguration, after a mob of President Donald Trump's supporters stormed the Capitol on January 6.

Five people died in the assault, including a police officer.

Security officials have warned that armed pro-Trump extremists, possibly carrying explosives, pose a threat to Washington as well as state capitals over the coming week.

Thousands of National Guard troops have been deployed in Washington and streets have been blocked off downtown with concrete barriers.

The National Mall, which is normally packed with people every four years for presidential inaugurations, has been declared off-limits at the request of the Secret Service, which ensures the security of the president.