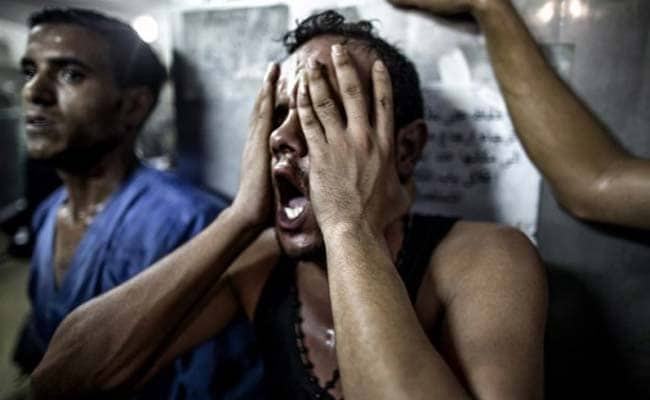 A relative reacts after seeing the bodies of three Palestinian children, killed in an explosion in a public playground on the beachfront of Shati refugee camp on July 28, 2014

(AFP Middle East correspondent Sara Hussein recently completed an assignment in Gaza, where more than 1,280 Palestinians have been killed -- including more than 240 children.)

Gaza: This war in Gaza is not the first war I have covered, it isn't even the first war I've covered in Gaza. I've been to places like Syria and Libya, and seen some of the horrible things that are normal in armed conflict, and I've seen dead children before, but never like during this war in Gaza. Never so many, never so often.

Everyone loves their children, and Gaza is no different. But there is a special public affection here, a pride untempered by sensibilities of privacy or modesty. Everyone wants to show you pictures of their children. The men whip out their cellphones even more readily than the women. I have seen photos of most of the children of the staff at my hotel. My favourite receptionist Ayman has two daughters, one of whom has his fair skin and light eyes; the smiling bearded guard/housekeeper Mahmud has three sons, including the youngest, who he tells me with a mixture of pride and slight embarrassment is as 'pretty as a girl.'

Children are everywhere in Gaza. They gather around you in refugee camps and at the schools run by the UN agency for Palestinian refugees UNRWA, where more than 160,000 people have sought shelter after fleeing their homes. Some of them are bold and inquisitive, reaching out a hand to shake yours, asking your name, about your family, your home country. Two sisters at a school in Gaza City rifled through my handbag looking for something to play with, and then played a clapping game with me.

Others are different, and are quiet in a way that suggests something beyond a mere personality trait. At the same school, a little girl with big eyes and red hair put her hand out for mine, but instead of shaking it, she just held onto me. She told me her name was Yasmin, but she wouldn't say anything else. She followed me around the school as I did interviews, and then came and sat next to me as I waited in the shade for a press conference. She didn't want to talk, just to sit quietly by my side.

At the morgue at Gaza City's Shifa hospital, employees have seen dozens of dead children. There was stoicism in the way they swabbed and cleaned the bodies of the three in front of them -- Afnan, Jihad and Wissam Shuheiber. They have seen broken little bodies before, and they would see them again, probably later that same day. Their clinical behaviour was all the more stark by contrast with the unrestrained pain on the faces of the children's relatives.

These three children -- brothers Jihad and Wissam, and their cousin Afnan -- were playing on a rooftop in Gaza City when a rocket hit their building. They were carried away with injuries but died soon after. Each of them was peppered with shrapnel wounds, hot steel had ripped away coin-size pieces of their skin. The teeth of one of the boys appeared to have been shattered in the attack. The youngest of the three, Wissam, was wearing blue and yellow superhero underwear.

"I cried as I took notes"

It was hard to remain composed in the morgue as the staff flitted around the three children, and a fourth who had been transferred after dying at another hospital. I slipped inside before the scrum of journalists entered, and I stood quietly in the corner as the team worked and three family members inside swung between anger and extreme pain. I continued to take notes and observe, but I cried as I did so. And when I wrote about it later, I cried again.

The Shuhaiber children were not the only infants killed as they played in Gaza. On July 16, I was filing a report in my hotel when the sound of a blast prompted me to run outside. I arrived on the hotel patio to see a group of children running in panic along the beach towards us. As they ran, another shell was fired at them. Several managed to take refuge in the hotel, where staff and journalists tried to comfort the terrified and treat the wounded. At least three were injured. With two other journalists, I tried to help a boy with shrapnel in his chest. Ambulances came and evacuated the wounded. They got to the beach to find four dead children. After the panic was over, the floor of the hotel's patio restaurant was smeared with blood and scattered with bits of gauze.

There's no final paragraph that neatly wraps up these sort of incidents, no happy ending. But there was a moment for me that stood in contrast, at the home of one of our wonderful reporters in Gaza, Adel Zaanoun. We sat down for the iftar evening meal and he insisted that I hold his two-month-old twins, Adam and Alma.

They were so tiny and so pink and they squealed and punched their little fists. They were so completely alive, and they all but forced everyone in the room to smile.