"He Said My Name And...": Protestors In China Spooked By Police Calls

Hundreds of mostly young people braved icy temperatures to gather near a riverbank as a vigil for victims of a deadly apartment blaze in Xinjiang. 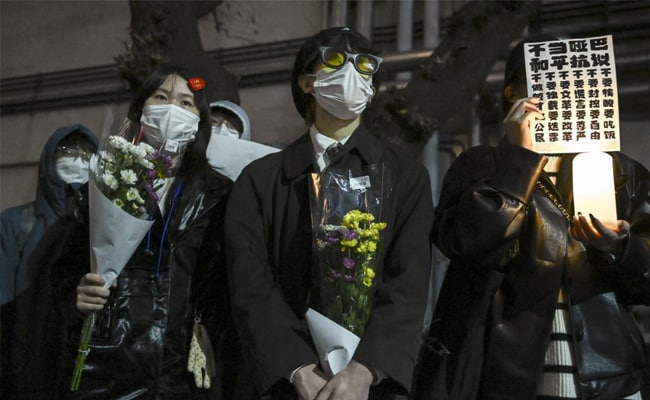 In one case, a police officer visited her friend's home after they refused to answer their phone.

Beijing protesters have been interrogated by police via phone call after attending rare large-scale protests calling for an end to China's harsh zero-Covid controls, one told AFP on Monday.

Hundreds of mostly young people braved icy temperatures to gather near a riverbank in the capital Sunday evening, as a vigil for victims of a deadly apartment blaze in northwestern China's Xinjiang region turned into calls to end zero-Covid.

People have taken to the streets in major cities and gathered at university campuses across China in a wave of protests not seen since pro-democracy rallies in 1989 were crushed.

A woman protester told AFP that by Monday evening she and five of her friends who attended the protest had received phone calls from Beijing police, demanding information about their movements.

In one case, a police officer visited her friend's home after they refused to answer their phone.

"He said my name and asked me whether I went to the Liangma river last night... he asked very specifically how many people were there, what time I went, how I heard about it," she told AFP, asking to stay anonymous for safety reasons.

"The police stressed that last night's protest was an illegal assembly, and if we had demands then we could submit them through the regular channels."

She said that the police officer was mostly "even-toned" during the brief call and urged her not to attend future events.

"I had previously prepared for this, but of course I was still agitated," she said, adding she would "try her best to continue" attending similar protests in the future, and "prepare better" next time.

"I never thought that this kind of civil society activity could ever happen in China," she said.

Two other protesters told AFP they heard that a mutual friend was taken away by police Monday evening, but did not know whether they were summoned for questioning or detained.

It is not clear how police discovered the identities of some protesters and the vast majority of those at Sunday's rally did not have their ID documents checked by police, an AFP journalist saw.

In Shanghai, an AFP reporter witnessed multiple arrests and confirmed that police had forcibly checked one protester's phone for foreign social media apps blocked in China which have been used to spread information about the protests.

On Chinese social media and over encrypted messaging apps inaccessible in China without specialist software, protesters have been sharing tips and legal advice on what to do in case they are interrogated or arrested by police.