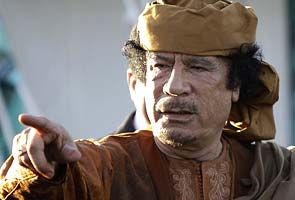 Washington: To a colourful group of Americans - the Washington terrorism expert, the veteran CIA officer, the Republican operative, the Kansas City lawyer - the Libyan gambit last March looked like a rare business opportunity.

Even as NATO bombed Libya, the Americans offered to make Col. Muammar el-Gaddafi their client - and charge him a hefty consulting fee. Their price: a $10 million retainer before beginning negotiations with Colonel Gaddafi's representatives.

"The fees and payments set forth in this contract are MINIMUM NON-REFUNDABLE FEES," said the draft contract, with capital letters for emphasis. "The fees are an inducement for the ATTORNEYS AND ADVISORS to take the case and nothing else."

Neil C. Livingstone, 65, the terrorism specialist and consultant, said he helped put together the deal after hearing that one of Colonel Gaddafi's sons, Seif al-Islam el-Gaddafi, was interested in an exit strategy for the family. But he and his partners were not going to work for free, Mr. Livingstone said.

"We were not an eleemosynary organization," he said.

Mr. Livingstone, a television commentator and prolific author who moved home to Montana this year to try a run for governor, said he had long been a vocal critic of Colonel Gaddafi and was briefly jailed by his government on a visit to Libya in the 1970s. The goal of the consulting deal, he insisted, was not to save Colonel Gaddafi but to prevent a bloodbath in Libya by creating a quick way out for the ruler and his family.

"The idea was to find them an Arabic-speaking sanctuary and let them keep some money, in return for getting out," he said. The consultants promised to help free billions of dollars in blocked Libyan assets by steering the government into compliance with United Nations resolutions.

But the Americans did not get the Treasury Department license they needed to accept payment from Libya, which was then subject to sanctions. Colonel Gaddafi was ousted from Tripoli in August by rebel forces backed by NATO airstrikes, and was captured and killed on October 20.

Now the confidential documents describing the proposed deal have surfaced on the Internet, offering a glimpse of how some saw lucrative possibilities in the power struggle that would end Colonel Gaddafi's erratic reign. A Facebook page called WikiLeaks Libya has made public scores of documents apparently found in Libyan government offices after the Gaddafi government fell.

The papers contained a shock for the Americans: a three-page letter addressed to Colonel Gaddafi on April 17 by another partner in the proposed deal, a Belgian named Dirk Borgers. Rather than suggesting a way out of power, Mr. Borgers offered the Libyan dictator the lobbying services of what he called the "American Action Group" to outmanoeuvre the rebels and win United States government support.

Noting that the rebels' Transitional National Council was gaining control of Libyan assets abroad, and attaching a registration form showing that the rebels had engaged their own lobbyists, Mr. Borgers said it was time for Colonel Gaddafi to fight back with his own Washington representatives.

"Our group of Libyan sympathizers is extremely worried about this and we would like to help to block the actions of your international enemies and to support a normal working relationship with the United States Government," the letter said. "Therefore it is absolutely required to speak officially and with one strong voice with the American Government."

Mr. Borgers ended the letter with the words "Your Obedient Servants," signing his own name and adding those of the four Americans.

The letter is especially awkward for Mr. Livingstone - described by Mr. Borgers in the proposal as the "recognized best American anti-terrorism expert" - who closed his Washington consulting firm in April to plan his campaign for governor.

But Mr. Livingstone said that he had never seen the letter before this week and that it distorted his intentions. "That doesn't reflect our view at all," Mr. Livingstone said. "Our whole goal was to get the Gaddafis out of there as fast as possible."

Another member of the proposed American team, Marty Martin, a former Central Intelligence Agency officer who led the agency's Qaida department from 2002 to 2004, said he, too, was chagrined to see Mr. Borgers's letter this week.

"We were not there to be lobbyists for Gaddafi," said Mr. Martin, who retired from the C.I.A. in 2007. "I was not told anything about that letter."

The other American partners were Neil S. Alpert, who had worked for the Republican National Committee and the pro-Israel lobbying group the American Israel Public Affairs Committee, and Randell K. Wood, a Kansas City, Mo., lawyer who has represented Libyan officials and organizations since the 1980s. (Neither Mr. Alpert nor Mr. Wood responded to requests for comment.)

Mr. Borgers, reached at his home in Belgium, dismissed his former partners' complaints about his letter to Colonel Gaddafi - though he said he "might not" have shared its text with them.
"Let's not argue about semantics," he said. He was in Tripoli at the time, he said, watching the chaos and violence escalate, and he thought Colonel Gaddafi should remain in power at least until an election could be held.

Mr. Borgers said he, too, wanted to "stop the butchering," but he offered a positive spin on Colonel Gaddafi's record.

"I don't think he was that brutal a dictator," Mr. Borgers said. "He created a country out of nothing over 42 years. He created a very good lifestyle for the people."

Of the $10 million fee the group sought, Mr. Borgers said, "The aim was not to make money." On the other hand, he added, "If you want to put up a serious operation in Washington, I think you need at least $10 million."

Mr. Borgers, who said he was a project engineer who had worked on infrastructure projects in many countries, was told by Libyan officials a week after sending his letter to Colonel Gaddafi that the proposal had been rejected. He said he had no idea if the leader saw it.

The documents on the aborted deal are not the first with an American angle to surface in post-Gaddafi Libya. In September, journalists and human rights advocates made public correspondence between Libyan intelligence and the C.I.A., including discussion of the rendition of terrorist suspects to Libya.

Promoted
Listen to the latest songs, only on JioSaavn.com
Seven months after the $10 million deal that was not to be, Colonel Gaddafi is dead. His son Seif is believed to be in hiding, possibly in Mali or Niger. Mr. Livingstone is focused on the problems of Montana, not Libya. Mr. Borgers, 68, said he was "trying to retire," though he said he just might entertain international business opportunities if they arose.

But the wheels of the Washington bureaucracy grind slowly. A Treasury Department spokeswoman, who would speak of confidential licensing matters only on the condition of anonymity, said the group's application to accept millions from the vanquished Gaddafi government "is still pending."