Scientists are keenly interested in how melt water on the surface of the Greenland ice sheet acts to speed up the movement of ice toward the sea by lubricating the underside of the ice surface. 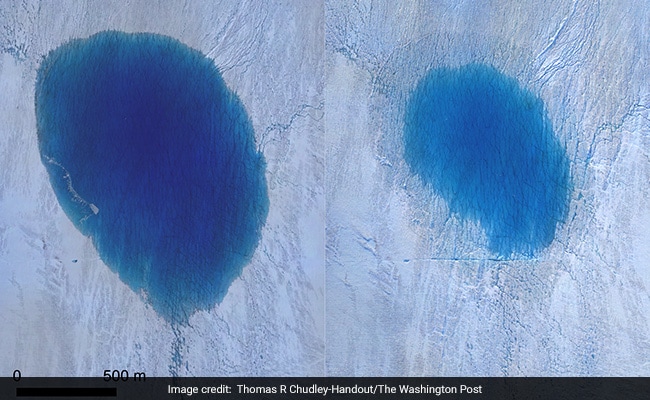 A cerulean blue lake consisting of glacial melt water on the surface of the Greenland ice sheet, located about 18 miles from where the Store Glacier meets the sea in west Greenland, briefly became one of the world's tallest waterfalls during the course of five hours on July of 2018.

The waterfall, like many others on the ice sheet's surface, was triggered by cracks in the ice sheet. In the case of this one melt water lake scientists closely observed in July 2018, the water cascaded down more than 3,200 feet to the underbelly of the glacier, where the ice meets bedrock. There, the water can help lubricate the base of the ice sheet, helping the ice move faster toward the sea.

The observations of scientists, armed with aerial drones and other high-tech equipment, of the partial lake drainage that resulted could help researchers better understand how surface melting of the ice sheet could affect its melt rate, and improve global sea level rise projections.

Scientists are keenly interested in how melt water on the surface of the Greenland ice sheet - the largest contributor to global sea level rise - acts to speed up the movement of ice toward the sea by lubricating the underside of the ice surface. The new study, published Monday in Proceedings of the National Academy of Sciences, suggests that scientists are underestimating the number of melt ponds that partially, and rapidly, drain into the ice sheet each year. This means that tweaks may be needed to the computer models used to predict sea level rise from Greenland.

This is the first study to show that partial lake drainage can occur through cracks in the ice, rather than overtopping or other mechanisms, which was previously the assumption. This means even more water is reaching the base of the ice sheet than previously thought.

For example, rapidly draining lakes in fast-moving areas of the ice sheet could provide a time-limited burst of speed for glaciers to dump more ice into the sea. The new study showed a sudden but brief increase in ice flow as the lake drained, from seven feet per day to 16 feet per day, though it slowed down again thereafter.

Using computer models, the study found that the lake in question is what the researchers term a "trigger lake," which can result in a chain reaction of sorts, causing more lakes as far away as 62 miles to subsequently drain.

The researchers observed a sudden, partial draining of the lake they termed "Lake 028" during a span of just five hours on July 7, 2018. At its peak, the lake was draining the equivalent of one Olympic-size swimming pool every three seconds, according to study lead author Thomas Chudley of the University of Cambridge.

To put it differently, the melt water was enough to fill one U.S. Capitol rotunda every two minutes and 19 seconds.

The researchers measured the lake's changes using about 900 photos collected by autonomously flying drones outfitted with GPS equipment. The images were stitched together to form 3-D surface elevation models. 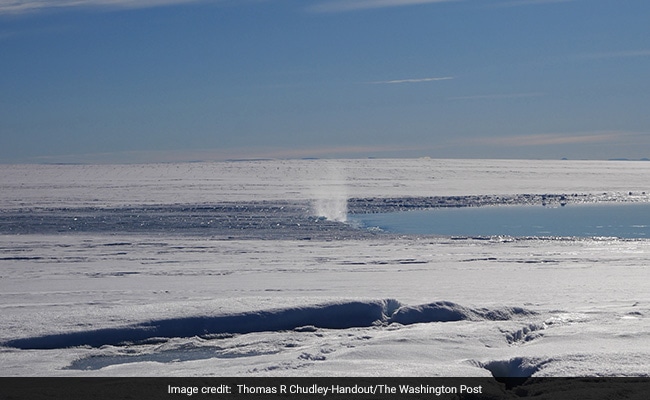 A lake draining into the Greenland ice sheet.

The sudden injection of water from the lake also helped raise the surface of the ice by about 1.80 feet, which suggests the water got between the ice and the base of the ice sheet via cracks in the ice known as hydrofractures. When water pours into these fractures, which originally form under stress, it can create moulins, which are vertical channels or caverns in the ice formed by flowing water. The presence of moulins set up glaciers for further ice melt from surface lakes in the future, the study finds.

"It's like a highway to the bottom of the bed," Chudley said in an interview.

In the case of Lake 028, the 2018 partial drainage occurred along a fracture in the ice that originally formed in 2017 and then moved along with the ice flow.

Study co-author Poul Christoffersen, a glaciologist at the University of Cambridge, said the passage of water to the ice bed is key because more surface melt ponds are forming as temperatures increase in response to climate change, and the water adds heat to the ice sheet's base, causing melting there.

For example, a spike in Greenland temperatures in the summer led to hundreds of melt ponds forming even at higher elevations on the ice sheet.

Christoffersen said the study breaks new ground by detailing the mechanisms by which surface water is transported to the bed of the ice sheet in a rapidly flowing part of a glacier.

"We already knew that many lakes drain and that fractures may be important in the lake drainage process, but the formation of fractures in terms of 'where', 'when' and 'how' has not been studied before, at least not with the resolution and details featured in our work," he said in an email. "Basically, we used drones to observe a fracture, which originally formed when the lake drained in 2017. The same fracture caused the lake to drain in 2018. We now know how fractures form in the first place, how those fractures move with the ice flow, and how they can reactivate [to] cause lake drainages multiple times."

"The water drop we observed was more than a kilometer, so these lake drainages may in fact, at least temporarily, form the world's largest waterfalls," Christoffersen said. It's possible that the melting of surface lakes can explain "how almost all water forming on the surface ends up at the bed," or bottom, of the ice sheet, he said.

The new study raises questions about a finding contained in the most recent report from the U.N. Intergovernmental Panel on Climate Change, which found that surface meltwater is unlikely to be causing significant enough alterations to the flow of the ice sheet. Specifically, the study found that satellite measurements being fed into computer models likely significantly underestimate the amount of rapidly draining melt water lakes on the ice sheet, especially lakes that partially drain.

Previous studies have found that only 3 percent of total melt water from Greenland comes from rapid lake drainage events such as the one shown in this study. However, Chudley said, "The subsequent surface-to-bed connections they form via moulins drains a total of 36 percent of total [melt water] runoff. So how many of these drainages are actually rapid (i.e. moulin-forming) really does matter."

However, outside experts who did not participate in the new study said that while it details with precision a particular lake drainage event, it doesn't provide the evidence needed to overturn the IPCC's conclusion.

"The community has thus far (including in this new case) not observed really big, persistent changes in ice flow from lake drainages," said Richard Alley, a geosciences professor at Penn State who was not involved in the new study.

He said previous papers have shown that temporary speedups with drainage events in Greenland do occur, but that they are not large and sustained enough to affect Greenland's overall melt rate.

(Except for the headline, this story has not been edited by NDTV staff and is published from a syndicated feed.)
Comments
Greenland Ice SheetMelting Glacier