Winter Solstice 2020: This year's Winter Solstice on December 21 coincides with a special astronomical event - the "Great Conjunction" of the Jupiter and Saturn. 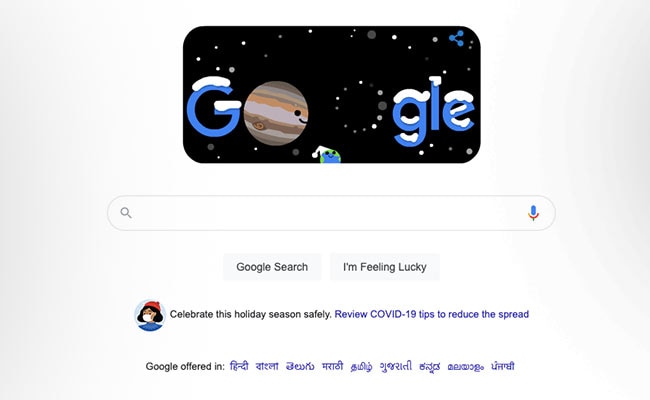 Google Doodle observes Winter Solstice, Great Conjunction today. Winter Solstice, the shortest day and the longest night of the year, is a phenomena that occurs when one of the Earth's poles has its maximum tilt away from the Sun.

The word "solstice" originated from the Latin solstitium meaning "sun stands still". In the Northern Hemisphere, Winter Solstice takes place between December 19 and 23. This year it is on December 21.

This year's Winter Solstice coincides with another special astronomical event - the "Great Conjunction" of the Jupiter and Saturn.

On Monday evening, Jupiter and Saturn will be in a rare planetary alignment, appearing closer together in the evening sky in nearly 800 years. They won't appear this close until 2080.

The animated Google Doodle exhibits Great Conjunction, wherein the Saturn and Jupiter meet up for a quick high five, and the Winter Solstice as the literally "snow capped" Earth watching the other two planets.

The event "Great Conjunction" of Jupiter and Saturn is also being referred to as the "Christmas Star of 2020."

According to NASA, "the two planets will appear just a tenth of a degree apart" and such an event will not happen again in the next 60 years, that is, until 2080.

The celestial show is set to take place after nearly 400 years "since the planets passed this close to each other in the sky, and nearly 800 years since the alignment of Saturn and Jupiter occurred at night," says the NASA.

Skywatchers, you're in for a once-in-a-lifetime treat! Jupiter & Saturn are doing a planetary dance that will result in the Great Conjunction on Dec 21, just after sunset. Find out:

???? When and where to look up
???? How to photograph the conjunction

Astronomers say that conjunctions between the two largest planets in our solar system aren't particularly rare. Jupiter passes its neighbour Saturn in their respective laps around the sun every 20 years. But today's celestial event is especially close: Jupiter and Saturn will be just one-tenth of a degree apart from our perspective or about one-fifth the width of a full moon. And if the weather permits, the planets should be easily visible around the world a little after sunset.

The planets will next come comparably close on March 15, 2080. On the night of December 21, their physical distance will be around 735 million km, Director of MP Birla Planetarium, Debi Prasad Duari, said in a statement.