Russia is launched invasion from three sides, sending its superior forces to Ukraine to capture it, defying warnings from the West. 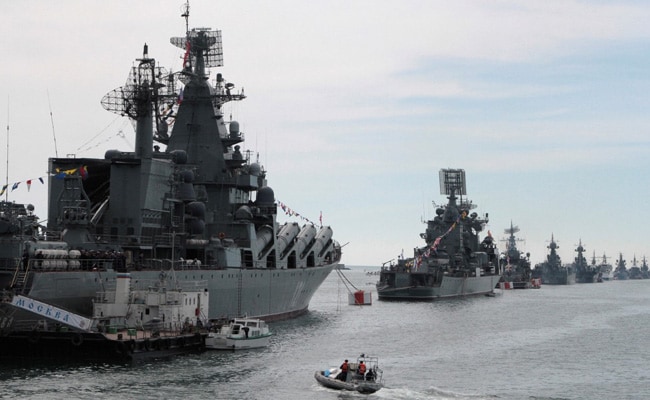 Thirteen Ukrainian soldiers, who were asked to surrender by a Russian warship, were killed after they refused. They instead asked the Russian ship to “go f*** yourself”.

An audio clip of the incident has surfaced on social media during the Russian invasion, and has been carried by many publications. It carries a warning from a Russian warship to Ukrainian soldiers defending the Snake Island in the Black Sea. After their refusal, the warship opens fire in which all 13 were killed.

The Snake Island is strategically located on the southeast border of Ukraine, which was attacked by Russia on Thursday. It was approached by two naval vessels, according to reports in Ukrainian media.

According to the transcript of the audio exchange, one of the Russian ships contacted the outpost on approach.

The 13 heroes of #UKRAINE ???????? army soldiers who were stationed on snake island in the audio, one says ‘This is it ‘ they are heard telling #Russian warship to go ‘fuck yourself' all died defending just 25 miles away from #NATO Territory #Ukrainian#UkraineInvasion#RussianArmypic.twitter.com/fDdCVuc0Cz

“This is a Russian warship, I repeat. I suggest you surrender your weapons and capitulate otherwise I will open fire. Do you copy?” the Russian ship said.

In response, one of the Ukrainian guards is heard saying, “This is it." He then appears to ask fellow guard, "Should I tell him to go f*** himself?”

The other guard tells him, "Just in case." The Ukrainian soldier then bluntly responds, “Russian warship, go f*** yourself.”

Another short video from the incident, which is doing the rounds on social media, shows two soldiers on the same Snake Island live-streaming it. These soldiers are outdoors and wearing military helmets.

Soon a gunshot is heard, and one of the soldiers is heard yelling. The video ends abruptly.

13 soldiers died in the attack. pic.twitter.com/FDe92rYYVR

All the guards on the Snake Island were killed by the Russian ship. In Ukraine, it is called Zmiinyi Island.

Internet was moved by Ukrainian soldiers' defiance. "last words for some incredibly brave ukrainians," a Twitter user said while reacting to the audio clip. "Legends never die," said another.

Ukraine's President Volodymyr Zelensky mentioned the courage shown by these soldiers in his address at the end of the first day of Russia's attack.

“On our Zmiinyi Island, defending it to the last, all the border guards died heroically. But did not give up. All of them will be posthumously awarded the title of Hero of Ukraine,” said Zelensky.

“May the memory of those who gave their lives for Ukraine live forever,” the President added.

Zelenskiy vowed on Friday to stay in Kyiv as his troops battled Russian invaders advancing toward the capital in the biggest attack on a European state since World War Two.

Russia launched its invasion by land, air and sea on Thursday following a declaration of war by President Vladimir Putin. An estimated 100,000 people fled as explosions and gunfire rocked major cities. Dozens have been reported killed, according to news agency Reuters.

Protesters turned out on public squares and outside Russian embassies in cities from Tokyo to Tel Aviv and New York on Thursday to denounce the invasion of Ukraine.