Lisel Heise is the oldest active politician in all of Germany, serving as a local council member in this western town of 8,000 known as "Kibo." 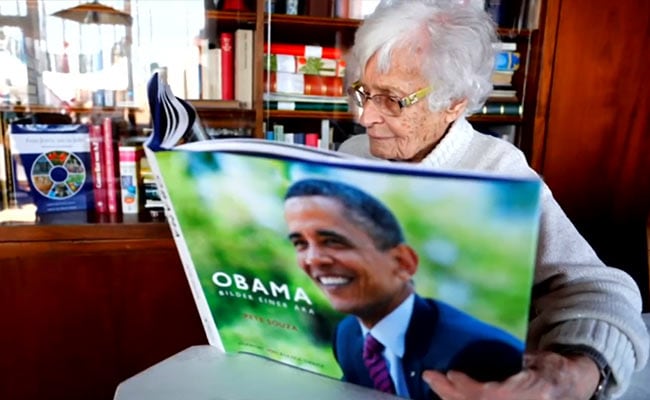 In her house, Lisel Heise keeps swaths of books on her role models and the issues she cares deeply about.

In March, she turned 100. In May, she won her first election for political office.

Heise is the oldest active politician in all of Germany, serving as a local council member in this western town of 8,000 known as "Kibo."

Her story could have easily fed worries about the dominance of older generations in German politics: In what is one of the world's most rapidly aging countries, every third voter is over 60. And that's raised uncomfortable questions about how democracy can work when one cohort gains overwhelming and long-term political sway over others.

But instead, almost half a year after her victory, Heise is offering an example of how to avoid a generational clash.

Her top-priority proposals are about improving the lives of young people as much as older residents. She wants a youth center and dance venue. She wants to cut down on cars and carbon emissions. She wants to reopen a shuttered swimming pool.

"When you imagine someone at that age, you might come up with the stereotype of a lovely, doddery and perhaps a bit indulgent elderly woman," said Maurice Conrad, 19, the youngest councilor in the nearby city of Mainz.

"Instead, she was more like: If nothing changes, then I'll just get involved myself and I'll call the shots," Conrad said. "That's something you would usually call youthful and rebellious."

On a recent afternoon, after refusing an offer to go by car, Heise bounded through the streets of Kibo on her way to the former pool.

Her father taught her how to swim when she was 3, and he helped build the pool when he was a town council member. For decades, Heise - who briefly swam professionally before becoming a teacher - came to Kibo's pool almost every day. When it was closed in 2011, it was a shock, she said.

"When I walked in the city, people would come up to me and ask: 'Can't you do anything about it?' " Heise recalled, standing on the empty field where the pool once was.

At the time, she wasn't sure what to do. She attended official functions as a concerned citizen but says the microphone was shut off when she spoke. She felt like authorities wouldn't listen to her.

It was her son who suggested she run for office herself.

Heise joined up with the left-leaning "We for Kibo" political association, which sought to challenge the centrist coalition that had controlled town politics for decades.

How did she manage to win?

"Many residents of Kibo," she said with a wink, "were my students once upon a time."

And now, Heise said, other town authorities have no choice but to take her seriously.

"It's important to hit back sometimes," she said.

Heise's youth was dominated by the rise of the Nazi regime, which brutally stifled any dissent. Her father was jailed for several weeks after he publicly criticized Nazi pogroms targeting Jews.

The Nazis also deemed Heise - a new teacher at the time - as too critical and temporarily transferred her to a different part of the country as punishment, she said. As a result, and after seeing what her father went through, she became cautious about speaking out. But after the war, she was able to embrace the freedom to express her political views more openly.

In her hillside house, Heise keeps swaths of books on her role models and the issues she cares most deeply about.

Barack Obama? "He was amazing, wasn't he?"

Brexit? Send those who advocate for it "to the moon," she recently told reporters.

Some in her town have watched with bemusement or confusion as Heise has become a world news commentator and national sensation. "It's a bit exaggerated - everything has been reduced to Lisel Heise," said Christian Fischer, 35, an engineer.

But to others, her life experience - combined with her humility and her conviction that she can make a difference - makes her someone they do not begrudge for being in the spotlight.

"She's been able to find a number of allies, as she's advancing topics that are close to her heart," said Manfred Grill, 54.

The town's mayor, Marc Muchow, called her an "icon who makes the town famous."

At a recent town council meeting, Heise followed the granular details of local politics until deep into the evening, listening in silence to most debates that were not among her own priorities. When she finally took the floor herself - urging councilors to take action against speeding drivers - she regained the passion residents here know from the many interviews she has given.

To Heise's dismay, not everyone agreed with her proposals that evening. When one councilor made a counterpoint, Heise swiftly intervened, saying, "That makes no sense."

After the meeting, Heise and an ally, Thomas Bock, walked out of the town hall into a dark, cold night. As they were passing the deserted squares of Kibo, Heise appeared annoyed with the pace of the council debates and eager to make a difference.