Donald Trump has infuriated the European Union, Canada and Mexico by imposing tariffs on steel and aluminium imports. 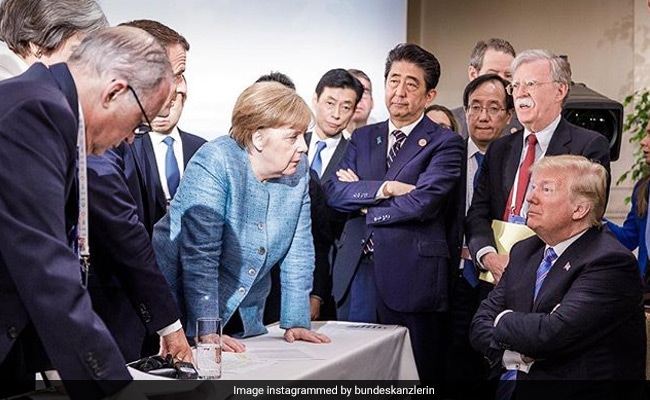 Germanyand France said they stood by the Group of Seven communique despite Trump's decision.

Germany and France on Sunday sharply criticised US President Donald Trump's decision to abruptly withdraw his support for a Group of Seven communique, accusing him of destroying trust and acting inconsistently.

Trump's announcement on Twitter, after he left the G7 summit in Canada early, that he was backing out of the joint communique torpedoed what appeared to be a fragile consensus on a trade dispute between Washington and its top allies.

Trump also took aim at Canadian Prime Minister Justin Trudeau and said he might double down on import tariffs by hitting the sensitive automobile industry, throwing G7 efforts to show a united front into disarray.

G7 members Germany and France said they stood by the communique despite Trump's decision.

"In a matter of seconds, you can destroy trust with 280 Twitter characters," German Foreign Minister Heiko Maas said when asked about Trump's U-turn, adding it would take much longer to rebuild lost trust.

Trump's conduct was "actually not a real surprise, we have seen this with the climate agreement or the Iran deal", Maas, a senior member of the Social Democrats (SPD), a partner in Chancellor Angela Merkel's governing coalition, told reporters.

Trump withdrew the United States from the global deal reached in Paris in December 2015 to curb global warming, and last month from world powers' July 2015 nuclear deal with Iran, asserting that it was one-sided in Tehran's favour.

SPD leader Andrea Nahles accused Trump of turning the G7 summit into a disaster with his tweets and bowing out of his international responsibilities. "President Trump is creating chaos. Reasonable and reliable policy is not possible that way."

France and Europe are standing by the G7 communique, a French presidency official said, adding anyone departing from the commitments made at the summit would be showing their "incoherence and inconsistency".

"International cooperation cannot depend on being angry and on sound bites. Let's be serious," the French official, speaking on condition of anonymity, told Reuters.

Trump has infuriated the European Union, Canada and Mexico by imposing tariffs on steel and aluminium imports, accusing all of having shortchanged the United States in trade deals. They strongly deny this.

Trump and European allies are also at odds over Trump's decision to pull the United States out of the deal in which Iran curbed its disputed nuclear programme in exchange for sanctions relief, and the Paris climate change accord.

"We have to keep a cool head now and draw the right conclusions," Maas said. Europe's answer must be to stick even closer together, defend its interests and strengthen alliances with countries such as Japan and Canada, he said.

"Europe united is the answer to America First," Maas added.

A German government spokesman also said that Berlin stands by the jointly agreed G7 communique in which leaders underlined the crucial role of a rules-based international trading system and promised to fight protectionism.

In Washington, the top White House economic adviser accused Canada's prime minister on Sunday of betraying Trump with "polarising" statements on U.S. trade policy that risked undermining the American leader on the eve of a historic summit with North Korea.

Larry Kudlow, director of the National Economic Council, lashed out at Trudeau as "amateurish" and "sophomoric" for a news conference the prime minister gave after Trump left the G7 summit on Saturday.

Trudeau told reporters that he had spoken of retaliatory measures that Canada would take next month in response to Trump's decision to slap tariffs on steel and aluminium imports.

(Except for the headline, this story has not been edited by NDTV staff and is published from a syndicated feed.)
Comments
G7 Summit 2018G7 2018Canada