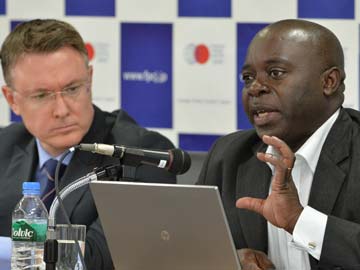 Justice Tettey (R), Chief of the Laboratory and Scientific Section, United Nations Office on Drugs and Crime (UNODC), speaks as Jeremy Douglas (L), Regional Representative, Regional Office for Southeast Asia and the Pacific (UNODC) looks on during a press

Tokyo: Strong and growing demand for drugs in Asia is driving up global production of methamphetamine, with seizures in the region tripling in five years to record levels, a UN body said Tuesday.

Both the use and the production of the drug is growing in the region, in concert with the expanding economy of the world's most populous continent, leading to growing social problems and higher healthcare bills.

Chronic use can lead to mood disturbances, violent behaviour, as well as symptoms of psychosis, such as paranoia and hallucinations.

To compile the latest report, the UN Office on Drugs and Crime (UNODC) grouped together methamphetamine, amphetamine and other similar chemicals as "amphetamine-type stimulants" or ATS.

It excluded so-called "ecstasy" drugs, which is usually reported separately in drug surveys.

"Over the years, methamphetamine seizures have been predominantly reported in East and South-East Asia, in countries such as China, Indonesia, the Lao People's Democratic Republic, Malaysia, Myanmar and Thailand," the Office said ahead of the report's launch in Tokyo.

Seizures of ATS-related drugs tripled to at least 36 tonnes per year in the five years to 2012, the report said.

China has had particularly severe problems, it said. In 2008, Chinese authorities seized six tonnes of methamphetamine.

That figure soared to more than 16 tonnes in 2012, accounting for about 45 percent of total methamphetamine seizures for Asia that year, the UNODC said.

Thailand has also seen its highest levels of seizures of methamphetamine pills and the drug in its crystalline state in past five years, said the report, entitled, "Global Synthetic Drugs Assessment: amphetamine-type stimulants and new psychoactive substances."

Growing ATS use was accompanied by expanding regional production, with large bases seen in China, Myanmar and the Philippines, the UN body said.

The drug is often trafficked long distances, the report said, adding the routes being used by drug sellers are becoming increasingly well-trodden. Notably from Mexico, the Middle East, South and West Asia, and West Africa to Japan and other lucrative markets in East and Southeast Asia and Oceania.

The continued spread of methamphetamine across Asia poses a growing challenge to justice systems and health providers in societies with large youthful populations, UNODC said.

Ironically, the things that are starting to boost living standards in Asia -- greater regional integration resulting in improved trade -- are the very things that are accelerating the spread of the drug.

"The impact of synthetic drugs, especially methamphetamine and new psychoactive substances, on the police, court, prison and health care systems of states in the region is tremendous," Jeremy Douglas, UNODC Regional Representative, Southeast Asia and the Pacific, said in a prepared statement.

Promoted
Listen to the latest songs, only on JioSaavn.com
"This rising threat of synthetic drugs is compounded for Japan and Asia because the production epicentres of amphetamine-type stimulants and new psychoactive substances are nearby," Douglas added.