Gaddafi's sons and their lavish spending 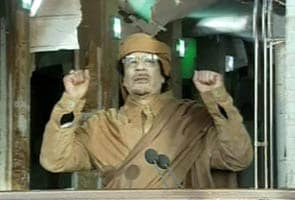 In the newspaper he controlled, Seif indignantly denied the report -- the big spender, he said, was his brother, Muatassim, Libya's national security adviser, according to an American diplomatic cable from the capital, Tripoli.

It was Muatassim, too, the cable said, who had demanded $1.2 billion in 2008 from the chairman of Libya's national oil corporation, reportedly to establish his own militia. That would let him keep up with yet another brother, Khamis, commander of a special-forces group that "effectively serves as a regime protection unit."

As the Gaddafi clan conducts a bloody struggle to hold onto power in Libya, cables obtained by WikiLeaks offer a vivid account of the lavish spending, rampant nepotism and bitter rivalries that have defined what a 2006 cable called "Qadhafi Incorporated," using the State Department's preference from the multiple spellings for Libya's troubled first family.

The glimpses of the clan's antics in recent years that have reached Libyans despite Col. Gaddafi's tight control of the media have added to the public anger now boiling over. And the tensions between siblings could emerge as a factor in the chaos in the oil-rich African country.

Though the Gaddafi children are described as jockeying for position as their father ages -- three sons fought to profit from a new Coca-Cola franchise -- they have been well taken care of, cables say. "All of the Gaddafi children and favorites are supposed to have income streams from the National Oil Company and oil service subsidiaries," one cable from 2006 says.

A year ago, a cable reported that proliferating scandals had sent the clan into a "tailspin" and "provided local observers with enough dirt for a Libyan soap opera." Muatassim had repeated his St. Barts New Year's fest, this time hiring the pop singers Beyoncé and Usher. An unnamed "local political observer" in Tripoli told American diplomats that Muatassim's "carousing and extravagance angered some locals, who viewed his activities as impious and embarrassing to the nation."

Another brother, Hannibal, meanwhile, had fled London after being accused of physically abusing his wife, Aline, and after the intervention of a Gaddafi daughter, Ayesha, who traveled to London despite being "many months pregnant," the cable reported. Ayesha, along with Col. Gaddafi's second wife, Safiya, the mother of six of his eight children, "advised Aline to report to the police that she had been hurt in an 'accident,' and not to mention anything about abuse," the cable said.

Amid his siblings' shenanigans, Seif, the president's second-eldest son, had been "opportunely disengaged from local affairs," spending the holidays hunting in New Zealand. His philanthropy, the Gaddafi International Charity and Development Foundation, had sent hundreds of tons of aid to earthquake-ravaged Haiti, and he was seen as a reasonable prospect to succeed his father.

The same 2010 cable said young Libyan contacts had reported that Seif al-Islam is the 'hope' of 'Libya al-Ghad' (Libya of tomorrow), with men in their twenties saying that they aspire to be like Seif and think he is the right person to run the country. They describe him as educated, cultured, and someone who wants a better future for Libya," by contrast with his brothers, the cable said.

That was then. Today the young protesters on the streets are demanding the ouster of the entire family, and it was Seif el-Gaddafi who declared on television at 1 a.m. Monday that Libya faced civil war and "rivers of blood" if the people did not rally around his father.

As for the 68-year-old Colonel Gaddafi, the cables provide an arresting portrait, describing him as a hypochondriac who fears flying over water and often fasts on Mondays and Thursdays. The cables said he was an avid fan of horse racing and flamenco dancing who once added "King of Culture" to the long list of titles he had awarded himself. The memos also said he was accompanied everywhere by a "voluptuous blonde," the senior member of his posse of Ukrainian nurses.

After Colonel Gaddafi abandoned his pursuit of weapons of mass destruction in 2003, many American officials praised his cooperation. Visiting with a congressional delegation in 2009, Senator Joseph I. Lieberman, Independent of Connecticut told the leader and his party-loving national security adviser, Muatassim, that Libya was "an important ally in the war on terrorism, noting that common enemies sometimes make better friends."

Promoted
Listen to the latest songs, only on JioSaavn.com
Before Condoleezza Rice visited Libya in 2008 -- the first secretary of state to do so since 1953 -- the embassy in Tripoli sought to accentuate the positive. True, Colonel Gaddafi was "notoriously mercurial" and "avoids making eye contact," the cable warned Ms. Rice, and "there may be long, uncomfortable periods of silence." But he was "a voracious consumer of news," the cable added, who had such distinctive ideas as resolving the Israeli-Palestinian conflict with a single new state called "Isratine."

"A self-styled intellectual and philosopher," the cable told Ms. Rice, "he has been eagerly anticipating for several years the opportunity to share with you his views on global affairs."