Trump warned allies to make major concessions or risk being cut off entirely from trade with the United States. 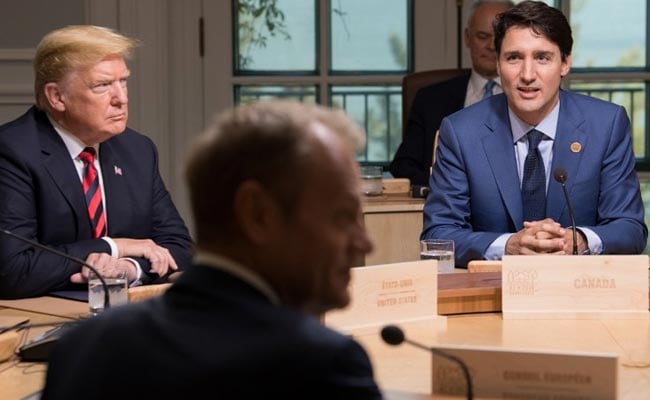 President Donald Trump feuded with Canadian Prime Minister Justin Trudeau and threatened to impose penalties on foreign automobile imports Saturday, capping an acrimonious meeting of the Group of Seven industrial nations that further frayed ties between the United States and its closest allies.

Trump said Saturday evening that he had instructed U.S. officials to withdraw support for a joint statement with other member nations he had backed just hours earlier, saying the United States would not join after Trudeau publicly criticized Trump's trade policy.

"Based on Justin's false statements at his news conference, and the fact that Canada is charging massive Tariffs to our U.S. farmers, workers and companies, I have instructed our U.S. Reps not to endorse the Communique as we look at Tariffs on automobiles flooding the U.S. Market!," Trump wrote on Twitter after leaving the summit.

Trump did not specify which of Trudeau's statements he considered false.

Trudeau criticized Trump's recent decision to place tariffs on steel and aluminum from the European Union, Canada and Mexico, saying it was "insulting" that Trump cited U.S. national security as his reason for doing so.

"Canadians, we're polite, we're reasonable, but we also will not be pushed around," Trudeau said at his own, separate news conference at the meeting's end.

"I highlighted directly to the president that Canadians did not take it lightly that the United States has moved forward with significant tariffs on our steel and aluminum industry," Trudeau said. "Particularly, [they] did not take lightly that it's for a national security reason that for Canadians . . . who stood shoulder to shoulder with American soldiers in far off lands in conflicts from the First World War onward, it's kind of insulting."

Later Saturday, GOP Sen. John McCain, Ariz., rebutted Trump's position by tweeting: "To our allies: bipartisan majorities of Americans remain pro-free trade, pro-globalization & supportive of alliances based on 70 years of shared values. Americans stand with you, even if our president doesn't."

G-7 leaders had hoped the annual summit here would strengthen ties that had been tested by trade disputes. Instead, it ended in a war of words between Trump and the leader of one of the United States' largest trading partners that threatened to escalate into a full-blown trade war.

Earlier Saturday, Trump said he had floated the idea of countries dropping all import barriers, saying he would do the same in return. But he warned he could cut off U.S. trade entirely with countries that kept current rules in place, arguing they had taken advantage of previous administrations to take advantage of the United States.

"We're like the piggy bank that everybody is robbing," Trump said here at a news conference. "And that ends."

Saturday's clashes ended a summit that was marked by repeated disagreements between the United States and its closest allies. The G-7, in its current form, consists of the United States, Canada, Britain, Germany, France, Italy and Japan.

Trump on Friday called for Russia to be readmitted to the G-7 after it was expelled in 2014 for annexing Ukraine's Crimea. And he departed the gathering early - skipping a discussion of global climate change - to fly to Singapore for a nuclear summit with North Korean leader Kim Jong Un.

Now, leaders from the G-7 and elsewhere face a string of trade decisions that will either preserve the existing global economic system or reshape it, with millions of jobs and trillions of dollars hanging in the balance.

Trump cautioned other nations - those in the G-7 and around the world - that the size of the U.S. economy means other nations can't win a trade war.

"We win that war a thousand times out of a thousand," Trump said.

Trump would almost certainly need help from Congress to completely cut off trade with a U.S. ally. But has already made significant changes to trade policy - working around bipartisan opposition from Congress - through invoking a previously seldom-used provision that allows presidents to make trade decisions if they deem it necessary to protect national security.

Trump described foreign leaders as receptive to his demands in private; Trudeau and others showed few, if any, public signs of caving.

It was part of a broader approach by foreign leaders to the second G-7 meeting of Trump's presidency. Representatives from other G-7 countries said they felt as though they had made progress in conveying their positions to Trump, something many of them felt pressured to do by voters at home.

Despite the tension, the member states' leaders were cordial in person, Trump included. He made first-name references to "Angela" and "Justin," and he repeatedly insisted he blamed previous U.S. leaders, not foreign ones, for what he sees as the global trade imbalance.

Trump said the leaders discussed the question of Russia's inclusion in the group but reached no conclusion. "We didn't do votes or anything, but it has been discussed," he said.

Russia is a permanent member of the U.N. Security Council and plays a significant role in international security issues. It also holds a seat in the larger Group of 20.

"We're looking for peace in the world. We're not looking to play games," Trump said.

Trump is not the first politician to make the realpolitik argument that Russia belongs at the G-7 table, but his position is a turnabout from the Obama administration, which condemned the 2014 annexation and imposed sanctions on Russia as punishment.

"Crimea was let go during the Obama administration, and, you know, Obama can say all he wants, but he allowed Russia to take Crimea. I might have had a very different" response, Trump said.

Leaders from Canada and Britain rejected Trump's call to bring Russia back, saying Russian President Vladimir Putin would have to make major changes to be given a welcome. Although, new Italian Prime Minister Giuseppe Conte sided with Trump.

U.S. intelligence agencies have said they have "high confidence" that Russia interfered in the 2016 election, and part of this year's G-7 summit was supposed to focus on protecting democracies from foreign meddling. Special counsel Robert Mueller III is investigating Russian interference efforts, including whether Trump's campaign colluded with Russian officials.

G-7 members met in part to discuss how to prevent election interference, and many remain angry over Putin's actions in Ukraine.

At his news conference, Trump first referred to the annexation of Crimea only obliquely.

"Something happened awhile ago where Russia is no longer in," he said. "I think it would be good to have Russia back in."

As they departed Saturday, it became clear that many are still searching for ways to deal with the unpredictable U.S. leader.

On Friday evening, the White House issued a statement saying Trump and Trudeau were very close to a deal to rework the North American Free Trade Agreement.

But during his comments Saturday morning, Trump raised multiple options for NAFTA, including a potential new deal or the possibility of doing separate deals with Mexico and Canada, effectively cleaving the longtime agreement in two.

"It was not contentious," Trump said. "What was strong was the language that this cannot go on, but the relationships are very good."

"The European Union is brutal to the United States, and they know it," Trump said, adding that other leaders acknowledge as much in private.

European officials described things much differently. Their leaders confronted Trump about how his protectionist policies had given them no choice but to retaliate with tariffs of their own, a person familiar with the encounter said. These tariffs, they told Trump, would hurt everyone. Trump had tried to essentially splinter the European leaders by negotiating some changes with Germany and different ones with France, but those leaders appeared locked together.

They had been careful not to reveal their approach before meeting with Trump, although it appeared very calculated.

As for Trump's proposal to eliminate all tariffs, he said it was unclear how other countries would respond.

"I did suggest it," Trump said. "I guess they are going to go back to the drawing board and check it out."

(Except for the headline, this story has not been edited by NDTV staff and is published from a syndicated feed.)
Comments
Donald TrumpCanada