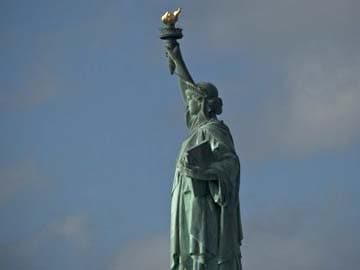 Paris: The sightseer of 4014 may have to pay a virtual visit to the Tower of London or Statue of Liberty, said a climate study on Wednesday that warned of dramatic ocean encroachment on heritage sites.

While modern civilisation is fascinated by the pyramids of Egypt, Rome's Colosseum and the Parthenon in Greece, much of this inheritance as well as our own cultural legacy may be lost to sea-levels rising as much as 1.8 metres (six feet) due to global warming, researchers said.

Out of more than 700 listed UNESCO World Heritage sites, nearly 140 risk being flooded in 2,000 years' time, they projected in a study published in the journal Environmental Research Letters.

These also include the Sydney Opera House, Venice in Italy, Japan's Hiroshima Peace Memorial and Robben Island in South Africa where Nelson Mandela was imprisoned for 18 years.

The calculation is based on sea-level rises associated with temperatures three degrees Celsius (5.4 degrees Fahrenheit) higher than pre-Industrial Revolution levels. The UN-targeted maximum rise is 2 Celsius.

"Our analysis shows how serious the long-term impacts for our cultural heritage will be if climate change is not mitigated," study co-author Anders Levermann from the Potsdam Institue for Climate Impact Research (PIK) said in a statement.

The average global temperature has already increased by 0.8 C on pre-industrial levels.

Promoted
Listen to the latest songs, only on JioSaavn.com
According to the UN's Intergovernmental Panel on Climate Change (IPCC), it could rise by an additional 2.6 to 4.8 Celsius by the end of this century, on a scenario for high emissions of greenhouse gases.

Levermann and his team set out to study the impact on cultural heritage of climate change - a phenomenon whose effects are usually measured for nature, the economy and agriculture.
Comments
Statur of LibertyTower of LondonGlobal warming