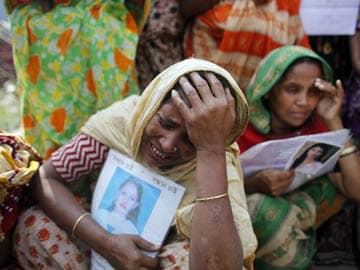 A relative of a garment worker, who is still missing after the Rana Plaza building collapse, cries during a protest in front of the site in Savar on November 24, 2013

Dhaka: Two fugitive owners of a Bangladesh garment factory turned themselves in on Sunday to face homicide charges for the deaths of 112 workers in the country's worst factory fire, a prosecutor said.

The owners of Tazreen Fashions, Delwar Hossain and his wife Mahmuda Akter, were sent to jail after being refused bail. They were among six fugitives wanted in connection with the November 24, 2012, fire on the outskirts of the capital, Dhaka.

Many of those who died in the multi-storey building perished because supervisors ordered workers back to their stations even as an alarm rang and smoke rose through an internal staircase.

A state prosecutor, Anwarul Kabir, said the couple had pleaded for bail after surrendering.

"The court sent them to jail after rejecting their bail petition," Kabir said.

Witnesses said several hundred people gathered at the court and chanted for the pair to be given the death penalty. If convicted, they could face life in prison.

In all, 13 people were charged in connection with the disaster, a rare step in a country where critics complain that powerful garment industry bosses often go unpunished for factory accidents.

The charges included breaching construction rules, such as the failure to provide two emergency exits.

Bangladesh, the world's second-largest apparel exporter after China, in December raised wages for garment workers and allowed workers to form trade unions in July after a string of factory accidents thrust poor pay and conditions into the international spotlight.

The $22 billion export industry, which supplies many Western brands, came under scrutiny when a building housing factories collapsed in April, five months after the Tazreen fire, killing more than 1,130 people.

Promoted
Listen to the latest songs, only on JioSaavn.com
The owner of that building that collapsed, Mohammed Sohel Rana, was arrested after a four-day hunt as he appeared to be trying to flee across the border to India.

After the Tazreen blaze, both Wal-Mart Stores inc WMT.N and Sears Holdings Inc said that goods were being manufactured for them at the factory though both had denied it authorisation as a supplier.
© Thomson Reuters 2014
Comments
Bangladesh garment factory fireDhaka