From Jackets To Bride Dresses, Family Treasures On Sale Amid US Shutdown

President Donald Trump and Democratic leaders have been locked in a stalemate over funding for a wall on the United States' southern border. 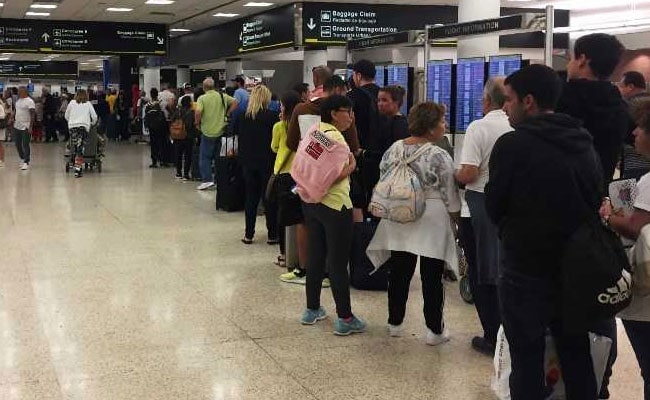 The current shutdown has become the longest in US history.

In the weeks since the federal government was paralyzed by a partial shutdown, furloughed workers and their families have learned a painful lesson: At a certain point, with bills piling up and no money coming in, necessity eclipses sentiment. Heirlooms, passion projects and memorabilia are suddenly a means to an end, a way to feed the kids or scrape together a mortgage payment.

While President Donald Trump and Democratic leaders have been locked in a stalemate over funding for a wall on the United States' southern border - with both sides blaming each other for what has become the longest shutdown in U.S. history - workers are making sacrifices that will sting even after the chaos subsides. These are the stories of things they sold to stay afloat.

For his first birthday party, Maverick wore a pair of orange "babyaitor" sunglasses. His mother, Andrea Cavallaro, zipped him into a tiny bomber jacket that she'd found on a website that sells gear for pilots. It was an impressive match for the one Tom Cruise wore when he played a fighter pilot of the same name in "Top Gun," with a fuzzy collar and a handful of patriotic patches. The zipper was a tiny metallic airplane. After a birthday photo shoot, the jacket hung over Maverick's high chair as he shoved his fistful of cake into his mouth, red icing smearing on his cheeks. Now, Cavallaro is selling it for $5 on Facebook.

"It's a sentimental item for me, but I know it has to go because I have to feed my kids," Cavallaro said as her son squealed in the background.

Cavallaro's husband is in the Coast Guard. He's worked every day of the shutdown. Last week, the Coast Guard issued a tip sheet of advice on how members should manage their finances while on furlough, suggesting that they babysit or hold a garage sale to bring in extra cash. Cavallaro, 36, joked about the absurdity of being told to have a garage sale in the heart of a Michigan winter, but she still spent days going through things in the basement, posting photos of baby clothes and toys from her three children on Facebook for $5 or $10 apiece.

"You never think that if you're working you're going to have to go without a paycheck," Cavallaro said. "Until you're in this situation, you don't understand what it does to you. It's made us rethink our finances and rethink what we hold on to."

Wendy Bates didn't think it would bother her, giving up a relic from a life she left behind. But she felt tears welling in her eyes when she sold the Waterford crystal toasting flutes she'd raised at her first wedding nearly two decades ago. The marriage might not have lasted, but the glasses were a piece of her history. They sold for $60.

She's been divorced for a few years and is engaged to a fellow NASA engineer, currently furloughed. Bates does engineering work for NASA as a contractor, and her company has allowed employees to keep working full hours to retain their benefits, but they're only being paid for 24 hours. If the shutdown extends until February, they'll have to close the doors.

Bates, who lives in Cleveland, is trying to compensate for the lost income by selling whatever she can: living room furniture, artificial plants, patterns from elaborate cross stitch pieces that now hang on her wall, paraphernalia from three years of Mardis Gras parades and diamond earrings.

"All along, I've been thinking, 'Why should I have to sell everything I worked so hard for?' " Bates said. "Just because some person sitting up in the White House says that everyone affected by the shutdown supports his decision?"

Mother of the bride dresses

As Laurie Slemmons was eagerly awaiting her daughter's wedding, she took a gamble on some dresses she saw online to wear on the big day - one gossamer pink sheath with a lace shawl, another, bright purple with petal-like draping. But when they arrived, they weren't what she'd envisioned. She felt foolish for buying something from overseas without getting to try it first, and the website didn't let her return them. But after years of hanging in her closet unworn, maybe they'll be worth something.

"I desperately need to sell these dresses due to government shutdown," Slemmons, 53, wrote in a Facebook post. "Asking $100 per dress."

Slemmons' husband, the family's main breadwinner, is furloughed from his job with the Department of Housing and Urban Development in Georgia. The couple has drained their savings to get by, straining under credit card debt they accrued to pay for Slemmons' father's funeral last year after he died. They're running out of options, on the brink of borrowing against Slemmons' 401K or cashing in a life insurance policy. Still, Slemmons is hoping she won't have to sell the cherrywood grandfather clock they found in an estate sale two years ago. The repairman told them it was worth $1,500.

"My husband always wanted a grandfather clock," Slemmons said. "But if this goes on, it'll probably have to go."

In a few days, she's having knee surgery she desperately needs, but because her office job is now the family's only source of income, she'll have to go back to work just days later. If the dresses sell, they'll help pay off her medical bills.

When Marcia Kendall first saw the Jeep in the local paper in 1995, it was already almost 20 years old, in need of work. She brought it back to life, applying the four-wheel wisdom she'd earned working on muscle cars with her older brother when she was growing up. It has been with her through college, through trauma, through divorce and a tornado. In 2002, she had to sell it to finance a difficult move. She cried for weeks afterward.

Fate returned it to her: She saw it in an auto shop five years later and convinced the owner to sell it back to her. She even won a AAA contest for best car story with it. She calls it her "baby." But after weeks of furlough from her job as a supervisor with the National Association of State Departments of Agriculture in Connecticut, a federal contractor, she has little else to give. Kendall, 50, applied for unemployment, but she hasn't heard back. She's looking for other jobs, but with no means to make her car and credit card payments, she's selling the Jeep on Facebook for $12,000.

"This car has been in and out of my life for 24 years," Kendall said. "But sometimes you've just got to do what you've got to do."

Kendall wrote a lengthy Facebook post about the Jeep, detailing the work she'd done to it over the years and stressing that she wanted it to go to "a good home."

"I put my heart and soul into this vehicle," Kendall wrote in the Facebook post. "It's heartbreaking to have to let it go, but that's how life is now."