The business-friendly president was to give a dinner speech for the executives gathered at the Versailles chateau near Paris for an event billed as a warm-up for Tuesday's opening of the World Economic Forum in the Swiss mountains. 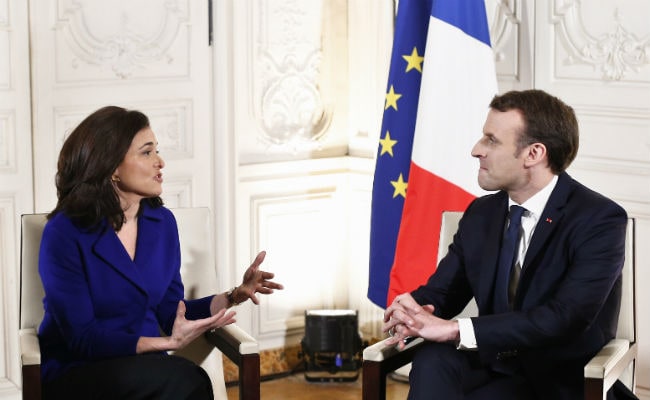 Paris: President Emmanuel Macron's campaign for a "French Renaissance" kicked into overdrive Monday as his government welcomed 140 multinational business leaders before this week's jamboree of the rich and powerful in Davos.

The business-friendly president was to give a dinner speech for the executives -- from such heavy hitters as Toyota, Coca-Cola, Google and Facebook -- gathered at the Versailles chateau near Paris for an event billed as a warm-up for Tuesday's opening of the World Economic Forum in the Swiss mountains.

Several firms used the conference to announce major French investments, most already in the works, with Facebook revealing Monday that it would pour an extra 10 million euros ($12.2 million) into its artificial intelligence centre in Paris.

Not to be outdone, US internet giant Google announced it would open its own theoretical research centre into AI in the French capital, to complement the centres the company already has in place in the United States and Switzerland.

Macron himself travelled to Toyota's car factory in Onnaing, northern France, to mark the Japanese company's new 300-million-euro investment at the site.

"If Toyota decides to invest 300 million euros and create 700 permanent jobs here, it's because you are good at what you do," Macron said while posing for selfies with employees.

A former investment banker, Macron has vowed to shake the French economy out of its torpor.

In his first months in office he pushed through reforms to the country's rigid labour laws and sharply cut wealth taxes and levies on capital gains.

Economic growth has been forecast to rise to 1.9 per cent in 2018 by the central bank, and Macron has also pledged to cut corporation tax to 25 per cent by 2022 from 33 per cent currently.

A survey by the US Chamber of Commerce and consultancy Bain & Company in November found a record 72 percent of US investors were optimistic about the French economy, up from just 30 per cent in 2016.

"More than three billion euros worth of projects have been announced" said government spokesman Benjamin Griveaux.

Some of those projects would never have seen the light of day without Macron's pro-business reforms, Griveaux added.

The French government is also hoping to capitalise on uncertainties elsewhere, including the Brexit negotiations and US President Donald Trump's unpredictability.

But some executives are keeping their enthusiasm in check, saying the bigger challenges of cutting France's huge debt pile and its public spending -- and pushing through the tax cuts for businesses -- still lie ahead.

France's deficit for 2017 is forecast to finally fall under the eurozone limit of three percent of GDP, for the first time in ten years.

"Even with a deficit under the three percent limit, France still has one of the worst financial situations among almost all its eurozone partners," Didier Migaud, president of France's Court of Auditors, warned Monday.

Macron's predecessors have held similar gatherings of CEOs, but the scale of his "Choose France" conference goes far beyond those hosted by Francois Hollande or Nicolas Sarkozy.

The Socialist Hollande hosted 34 world business leaders in 2014, while rightwinger Sarkozy rolled out the red carpet for 25 in 2011.

The bosses of Coca-Cola, Rolls Royce, Google, Siemens and Chinese e-commerce giant Alibaba, and the chief operating officer of Facebook, Sheryl Sandberg, are among those to have taken up the invitation.

While Macron has been given much of the credit for boosting France's standing on the international stage, foreign investment had already begun to pick up before his May 2017 election.

But such investments have failed to make a significant difference on the jobs front, with France's unemployment rate still stuck at 9.7 per cent -- nearly twice that of Britain or Germany.

In tax terms, France has also benefited little from the presence of tech giants such as Google and Facebook -- a bone of contention for Macron, who is pushing for them to contribute more to state coffers.

The Versailles conference came the day before leaders from 60 countries and 1,700 businesses start descend on Davos for the world's most exclusive talking shop.

The 40-year-old French president himself will take to the stage in Davos on Wednesday, where he is set to cut a contrasting figure to that of President Trump.

Promoted
Listen to the latest songs, only on JioSaavn.com
While Trump campaigned on an anti-elitist platform that railed against globalisation, Macron has defended globalisation, though he will call for a more balanced form of it in his Davos speech.