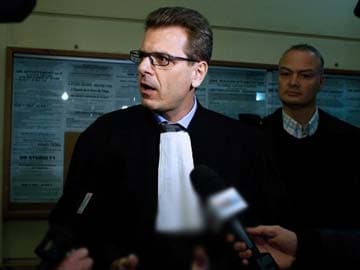 Thibault de Montbrial, the civil party lawyer in the trial of Cassandra Belin, a full-face veiled woman who had opposed her identity checks last July in Trappes, answers journalists at the courthouse, on January 8, 2014, in Versailles.

Versailles: A French court on Wednesday convicted a young woman for wearing a full-face Islamic veil in public and threw out her bid to have the country's controversial burqa ban declared unconstitutional.

Cassandra Belin, 20, was also convicted for insulting and threatening three police officers at the time of her arrest, which sparked two days of rioting in the town of Trappes, near Paris, in July, 2013.

She was given a one-month suspended prison sentence for the clash with the police and a 150-euro ($200) fine for wearing the veil.

Her lawyers, who argued that the burqa ban impinges on religious freedom and unfairly target Muslims, had asked for an emergency ruling on the constitutionality of the ban before sentencing.

But that request was rejected on the grounds that the Constitutional Council had previously upheld the 2011 law.

Belin's lawyer, Philippe Bataille, said he would consider an appeal and pledged to continue to fight to have the ban overturned. "I'm not throwing in the towel," he said.

Thibault de Montbrial, the lawyer for the three police officers, welcomed the court's ruling. "We cannot tolerate exceptions to the law of the land," he said.

The European Court of Human Rights is expected to rule later this year in a case brought by a French Muslim who argues that the burqa ban violates her rights to freedom of religion, freedom of expression and freedom of assembly, and breaches a prohibition against discrimination.

Promoted
Listen to the latest songs, only on JioSaavn.com
France argues that the ban is necessary for security reasons and to uphold the country's secular traditions.

But critics say if security is a consideration, then motorcycle helmets should also be outlawed. In theory the ban covers all face coverings, but in practice the only arrests have been of women wearing Muslim veils.