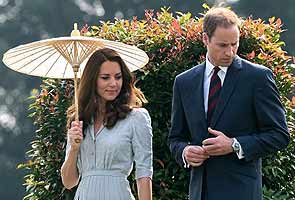 Nanterre, France: Lawyers for Prince William and wife Kate asked a French court on Monday to block further publication of topless photos of the Duchess of Cambridge, saying the two were sharing a deeply intimate moment caught by the snap of an intruding photographer - images that ended up last week in a popular French gossip magazine, then in publications in two other countries.

The court in Nanterre, outside Paris, said it would announce its ruling at noon Tuesday on the request to stop Closer from reproducing the images. The magazine published 14 of the images of a partially clad Kate in its pages on Friday. On Monday, an Italian magazine, Chi, published a 26-page spread of the photos of Kate. Chi, like Closer, is part of the Italian publishing house Mondadori, owned by former Italian Premier Silvio Berlusconi.

An Irish tabloid published more Kate topless photos over the weekend, drawing a vow from Ireland's justice minister to revise privacy laws there. The editor of the Irish Daily Star was suspended.

The royal couple was sharing a "healthy and profoundly intimate" moment when the photos were taken, their lawyer, Aurelien Hamelle, told the court. The situation was "deeply personal."

The photos in question show the Duchess of Cambridge relaxing during a holiday at a private villa in Provence, in southern France, sometimes without her bathing suit top and, in one case, her suit bottom partially pulled down to apply sun screen.

William's St. James's Palace called the publications of the photos a "grotesque" invasion of the couple's privacy.

The case centers in part on just how private the villa was and whether, in effect, Kate was to some extent flaunting herself.

"It's not an accessible (view) from the exterior," Hamelle said of the site - a point contested by Closer's lawyer, Delphine Pando who said the site is visible from a nearby road.

"What is certain for her (Kate's) close family as for herself is that it's something extremely troubling," Hamelle said.

Pando, the lawyer for Closer, asked the court to throw out the royal demand, arguing that the rights to the photos belong to an agency - which sold their use to Closer. She did not give the price.

"We are not the owners of these photos," she said. "The photos are out there. If a TV show wants to show an image of this (magazine) edition, it's got nothing to do with us."

That argument echoed the stance of the editor of Chi, the Italian magazine. Alfonso Signorini told The Associated Press over the weekend that he didn't fear legal action since the photos are already in the public domain following Closer's publication.

The case is but the first of two legal actions by the royals. In a reflection of just how intent they are on protecting their privacy - and likely dissuading paparazzi from future ventures, St. James's Palace said Sunday the family lawyers would file a criminal complaint.

The Sipa news agency reported that the Nanterre prosecutor's office opened a preliminary investigation on Monday for breach of privacy, receiving and complicity. While no one was named, it would appear to cover the photographer or photographers involved in the case and possibly Closer. The palace said it would be up to French prosecutors to decide whether to investigate and pursue a criminal case for breach of privacy or trespassing.

That second judicial action was not mentioned in Monday's proceedings, and there was no mention of the name of the photographer or photographers who took the offending pictures. There was only reference to an "agency."

"It is clear that some sections of the print media are either unable or unwilling in their reportage to distinguish between prurient interest and the public interest," said Shatter.

"Sections of the print media believe that public figures are fair game and have no right to privacy in respect of any aspect of their lives," Shatter added.

Independent Star, the company which owns the newspaper in question, said Monday that Michael O'Kane had been suspended as editor and an internal inquiry had been launched.

Promoted
Listen to the latest songs, only on JioSaavn.com
The newspaper printed some of the photographs on Saturday in editions available in Ireland, but not inside the U.K.