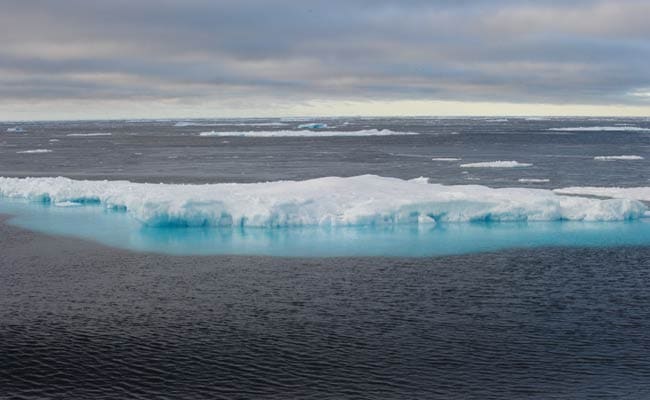 Ice chunks are seen in the Northwest Passage near the CCGS Amundsen, a Canadian research ice-breaker navigating in the Canadian High Arctic. (AFP File Photo)

Montreal: Temperatures at the North Pole rose above freezing point today, 20 degrees Celsius above the mid-winter norm and the latest abnormality in a season of extreme weather events.

Canadian weather authorities blamed the temperature spike on the freak depression which has already brought record Christmas temperatures to North America and lashed Britain with winds and floods.

The deep low pressure area is currently looming over Iceland and churning up hurricane force 75-knot winds and 30-foot waves in the north Atlantic while dragging warm air northwards.

"It's a very violent and extremely powerful depression, so it's not surprising that hot temperatures have been pushed so far north," said Canadian government meteorologist Nathalie Hasell.

"This deep depression has pushed hot air as far as the North Pole, where temperatures are at least 20 degrees above normal, at around freezing point, between zero and two degrees," she said.

US scientists from the North Pole Environmental Observatory told AFP that the temperatures had climbed suddenly.

An Arctic monitoring point 180 miles (300 kilometers) from the Pole that had been recording minus 37 degrees on Monday had shot up to minus eight by Wednesday, said senior researcher James Morison.

The polar region is the area of the world that has seen the most profound effects of climate change in recent decades.

Average year-round temperatures in the Arctic are three degrees Celsius higher than they were in the pre-industrial era, snowfall is heavier, winds are stronger and the ice sheet has been shrinking for 30 years.

It would be too hasty, however, to pin this week's extreme weather directly on the man-made climate change phenomenon, rather than on a discreet anomaly.

Hasell said that Canada has not kept complete records of North Pole weather but that it was nonetheless "bizarre" to see such high temperatures on the ice pack in the middle of its long night.

After tormenting the North Atlantic, the depression is expected to head towards Russia's Siberia, where the inhabitants can expect a heatwave of sorts.

In Canada, the capital of the Nunavut territory of the native Inuit, Iqaluit, celebrated a relatively balmy Christmas when temperatures rose to minus 4.6 degrees -- up from an average of minus 21.

"It's doubtless the El Nino effect, venturing further north," he told AFP, referring to a tropical Pacific weather phenomenon that reoccurs every four to seven years in more southerly climes.

The 2015 El Nino is regarded as perhaps the most powerful in a century and, combined with the effects of climate change, it has generated storms, flood and droughts in Central America and beyond.