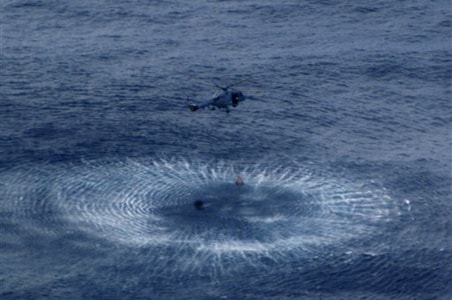 A French nuclear submarine arrived off Brazil today to start hunting for the black box flight recorders from Air France Flight 447 which crashed into the Atlantic last week.

"The Emeraude will begin its patrol this morning, in a first search zone measuring 20 nautical miles by 20, that is to say 36 kilometres by 36, which it should cover in a day," said military spokesman Captain Christophe Prazuck.

"It will change zone each day and no time limit has been set," he said, adding that the Emeraude would be joined in the area by the Mistral, a naval command and control vessel equipped with helicopters.

Brazil already has a large naval and air force contingent in the area where the Airbus A330 crashed on June 1 with the loss of all 228 people on board, and it has recovered some debris and at least 41 bodies.

But the black boxes, designed to emit a locator signal for at least a month after a crash, could hold clues that will help investigators identify the cause of the disaster.

French officials acknowledge the search will not be easy. The black boxes are thought to be in waters as deep as 6,100 metres and 1,150 kilometres from the Brazilian coast.

If the Emeraude does locate the signal, the French scientific research vessel Pourquoi Pas will launch a mini-submarine -- the same one that found the wreck of the Titanic -- to retrieve the recorders.