The Federation of French Cinemas said Monday the double whammy was crippling the industry as they demanded state aid to help them through the crisis. 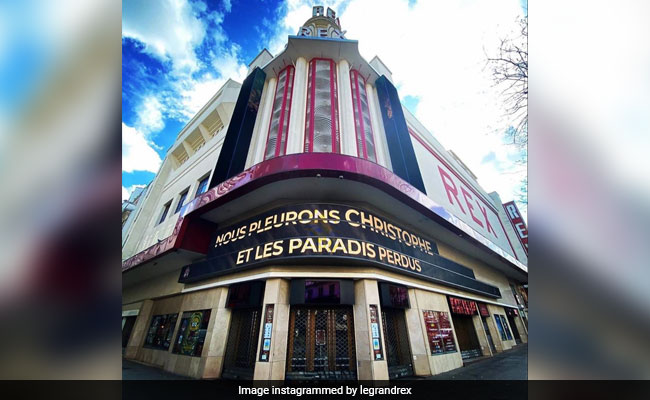 The Grand Rex is spread over seven acres and can seat 2,700

One of France's most iconic cinemas it to shut its doors for the month of August because so few people want to risk seeing movies on the big screen.

Managers at the enormous Grand Rex in the centre of Paris -- which remained open throughout World War II -- said Monday Hollywood studios were also to blame for holding back the release of so many of its summer blockbusters.

The Federation of French Cinemas said Monday the double whammy was crippling the industry as they demanded state aid to help them through the crisis.

"Between the drop in admissions (because of the coronavirus) and the lack of fresh American films that traditionally are a big summer draw, we have decided to close our doors from August 3," the Grand Rex's manager Alexandre Hellmann told AFP.

"We will lose less money by closing than by staying open with this depressing box office," he added.

With 2,700 seats, the seven-screen Grand Rex's largest theatre is one of the biggest in Europe with a 300 square-metre (3,230 square-foot) screen.

Many French cinemas have been all but empty since they were allowed to reopen after an eight-week lockdown last month.

The cinema federation appealed to banks and landlords to give their members leeway, saying it was "absolutely necessary that the government also take urgent action to refinance" the sector.

Social distancing rules means cinemas are only ever allowed to be half full.

And audiences have mostly stayed away despite a poll finding that nearly a third of the country's population was keen to get back in front of the big screen.

Several cinema managers told AFP that the postponement of "Top Gun 2", "Wonder Woman 1984" and Christopher Nolan's spy drama "Tenet", as well as the Disney big-budget family movie "Mulan", had helped kill the buzz they were counting on to draw people back.

"It is much tougher than we imagined," said Aurelie Delage, manager of the six-screen Cinemascop Megarama at Garat in western France.

It is so grim in fact that "I am not looking at the figures," she told AFP. "This can't last."

But the lack of competition from Hollywood has helped some smaller French films make an impact at the box office, with the comedies "Divorce Club" and "Tout simplement noir" ("Very Simply Black") helping to push admission through the one-million barrier last week for the first time since the end of the lockdown.

Several big French releases have also been put back to September and beyond.

A study last week showed the French box office down almost 70 percent on the same period last year with only arthouse cinemas bucking the trend.

Yet the traditionally cinephile French have still been far more enthusiastic about returning to cinemas than their neighbours.

German cinema entries are down to just 17 percent of normal levels and the situation in Spain is even more catastrophic at just 13 percent, according to the Comscore study.