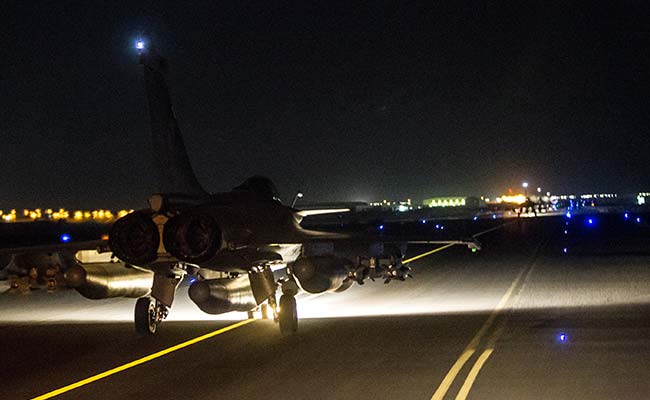 The French Defense Ministry said that 10 aircraft dropped 20 bombs on facilities used by the militant group, which has claimed responsibility for Friday's terrorist attacks in Paris, striking a command center, a militant-training facility and an arms depot.

Opposition activists reached in Raqqa said they counted at least 30 bombs, which they said hit, among other things, a local football stadium, a museum and medical facilities. They said the strikes had knocked out electricity in the city of about 200,000 people.

The French statement said the operation, launched from bases in the United Arab Emirates and Jordan, was conducted in coordination with U.S. forces, who have compiled an extensive target list in Raqqa. American officials, speaking at the G20 summit here that President Barack Obama is attending, said the French operation was discussed between the two militaries, as well as in telephone calls Saturday and Sunday between Defense Secretary Ashton Carter and his French counterpart. 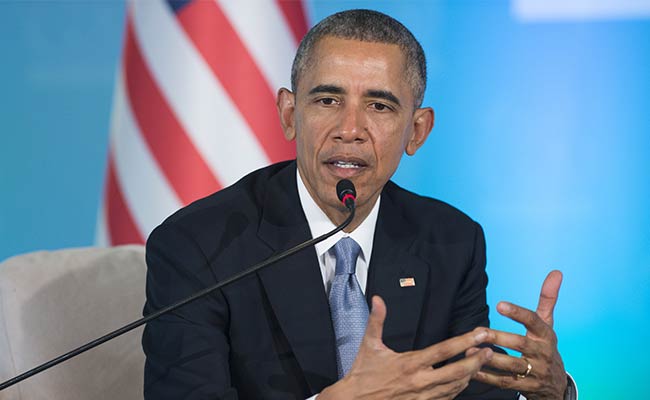 President Barack Obama, who is attending the G20 Summit in Turkey, said the French operation was discussed between the French and American militaries. (AFP photo)

U.S. planes have repeatedly struck in and around Raqqa, in north-central Syria, in recent months.

In Iraq on Sunday, foreign minister Ibrahim al-Jaafari said Iraqi intelligence had obtained information before the Paris attacks that the Islamic State was planning an imminent terrorist attack overseas that may have been targeting "in particular" France, the United States and Iran.

"We notified these countries and warned them," Jaafari said in a statement. The statement did not include specifics of when the Iraqis acquired the information. U.S. intelligence officials did not confirm the report.

Administration officials said the United States would not alter its strategy against the Islamic State in response to the Paris attacks, despite evidence that the terrorist group was expanding its ability to hit Western targets. In recent weeks, Obama has approved escalation of airstrikes in both Syria and Iraq, and authorized deployment of 50 Special Operations troops to assist Syrian Kurdish and Arab forces pushing toward Raqqa.

Officials said that, in response to Paris, the administration was seeking renewed global commitment to that intensified military action, and to a negotiated settlement of Syria's civil war.

France's retaliation came as Obama held talks with allied leaders and with Russian President Vladimir Putin, at the summit being held in this Turkish Mediterranean resort city.

Obama vowed again on Sunday to help France hunt down the perpetrators of the attacks. Deputy national security adviser Benjamin Rhodes said Obama agreed with French President Francois Hollande that the attacks, which killed at least 129 and wounded more than 350, was an "act of war." But he and others disputed suggestions from Republicans that Obama, who said in an interview last week that the U.S.-led coalition had contained the Islamic State, has consistently underestimated the adversary.

The president was referring to recent setbacks for the militant group on the battlefield in Iraq, Rhodes told reporters. The Islamic State, also known as ISIS, ISIL and Daesh, a derogatory term in Arabic, has long harbored ambitions to sow bloodshed farther from its home base in Syria, he said, emphasizing that Obama has been realistic that the fight would be long and difficult.

"It's the manifestation of what has been the ambition of ISIL for some time now -- to conduct attacks beyond Iraq and Syria," Rhodes said. "The president indicated when he launched the counter-ISIL strike campaign that he knew ISIL had those ambitions, which is why we have always focused on the threat of foreign fighters."

The highly coordinated assaults on several locations in Paris on Friday evening have shaken the gathering of global leaders here. The Islamic State claimed responsibility for the attacks, which intelligence officials said were carried out by three teams of terrorists affiliated with the extremist group.

The attacks prompted Hollande to declare France would lead a "merciless" fight against the Islamic state, a move that could increase pressure on the Obama administration to take stronger actions to ensure that the Islamic State cannot attack the United States directly.

GOP leaders, including some presidential candidates, have faulted Obama's strategy as too limited to contain the Islamic State. The Paris attacks, along with the recent bombing of a Russian commercial plane claimed by the group, have thrust the administration's approach in the Middle East into the 2016 campaign for the White House.

Democratic frontrunner Hillary Rodham Clinton, who served as Secretary of State in Obama' first term, has struggled to articulate how she would deal with the threats. Republican presidential hopeful Jeb Bush said in an interview on "Meet the Press" that the United States "should declare war and harness all of the power the U.S. can bring to bear."

After a meeting with Turkish President Recep Tayyip Erdogan, the summit host, Obama said that "attacks on Paris, and earlier in Ankara, were attacks "on the civilized world," and that the United States would "stand in solidarity" with the victims in "hunting down the perpetrators of this crime and bringing them to justice."

Rhodes emphasized that they attacks did not change the White House's reluctance to establish a massive ground force of U.S. troops in the region, saying the administration remains confident it can push back the Islamic State by relying on local forces it is training and advising Iraq and Syria, along with punishing airstrikes.

"The further introduction of U.S. troops to fully reengage in ground combat in the Middle East is not the way to deal with this challenge," Rhodes said.

In Vienna on Saturday, regional and European leaders, along with the United States and Russia, agreed to press the various factions they back in Syria's civil war to come together no later than Jan. 1 to begin talks on forming a transitional government.

Once that process starts, participants agreed, they would support a U.N.-monitored ceasefire in fighting between forces of Bashar al-Assad, backed by Russia and Iran, and a wide array of rebel groups variously backed by the United States, Saudi Arabia, Turkey and others.

The administration has said that settling the ongoing civil war would allow global competitors to focus on defeating the Islamic State in both Syria and Iraq.

The Paris attacks, Rhodes said, "can serve to create a greater sense of urgency in the international community behind supporting various element of the counter-ISIL campaign and support for a diplomatic resolution of the Syrian conflict."

Obama also met with Putin on the sidelines of the summit. White House officials said they spoke for 35 minutes, and that the discussion "centered around ongoing efforts to resolve the conflict in Syria, an imperative made all the more urgent by the horrifying terrorist attacks in Paris," and the "diplomatic progress" achieved in the Vienna. While the United States has insisted that Assad must relinquish power, Russia, Assad's main backer, has bombed rebel forces in a bid to help him remain in control.

Obama and Putin were joined in their meeting, held in the lounge area of a hotel conference center, by U.S. National Security Adviser Susan E. Rice and a man who appeared to be an interpreter. A closed-circuit video feed showed them sitting around a coffee table, with Obama leaning forward in his chair and talking intently with Putin, who was also leaning in, as other world leaders milled about.

In Brussels, NATO dropped the flags of its 28 member nations to half staff to honor the French dead. NATO officials said that France so far has declined to invoke the alliance's Article 5, which would oblige all members to join its fight against the militants..

The only time Article 5 has ever been invoked was, at U.S. request, after the September 2001 al-Qaeda attacks.

"We support the French authorities in their determination to deal with the terrorist threat," a NATO official said Sunday, "and a number of allies are already working with France on their ongoing operations and investigations in the wake of the attacks."