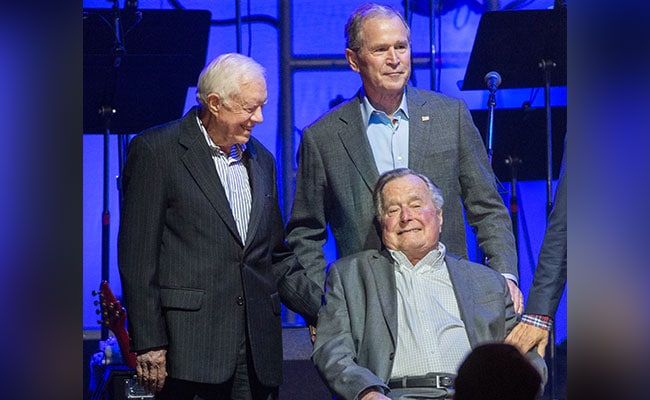 College Station, United States: All five of America's living former presidents took the stage Saturday at a benefit concert in Texas to raise money for victims of the hurricane-ravaged southern United States and Caribbean.

The effort by the three Democrats and two Republicans has raised over $31 million from 80,000 donors for the victims of hurricanes Harvey, Irma and Maria, George H.W. Bush's office said.

"All of us on this stage here tonight could not be prouder of the response of Americans. When they see their neighbors and they see their friends, they see strangers in need, Americans step up," Obama said.

"I too am here to urge you to give to this fine fund, and I want to thank all the volunteers," the younger Bush said.

'We need each other'

Lady Gaga gave a surprise performance at the concert, announcing that she would make a $1 million donation and that a "mental health and emotional trauma surviving program" would be set up for hurricane survivors.

"Pain is such an equalizer. And in a time of catastrophe, we all put our differences aside and we come together, 'cause we need each other, or we can't survive," she said.

Lee Greenwood opened the concert and served as master of ceremonies for the event, titled "Deep From the Heart: The One America Appeal," which also featured artists including The Gatlin Brothers, Yolanda Adams, Robert Earl Keen and Sam Moore.

Trump did not attend the concert, but praised the effort in a video message released earlier, terming it a "wonderful" and "vital effort."

"As we begin to rebuild, some of America's finest public servants are spearheading the One America Appeal," said Trump, whose administration's response to the heavy storm damage in Puerto Rico has drawn fire.

Promoted
Listen to the latest songs, only on JioSaavn.com
"Melania and I want to express our deep gratitude for your tremendous assistance," he said.