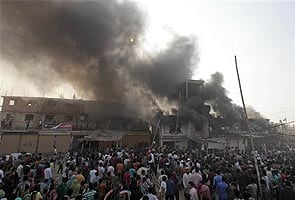 Dhaka: The unlicensed garment factory in the Bangladesh capital where seven women workers died in a fire Saturday was making clothing for Spanish giant Inditex and several French brands.

An AFP correspondent sifting through the charred remains of the Smart Export factory Sunday found labels such as Bershka, a retailer owned by Inditex; Sol's; Scott and Fox; and G Blog, which is part of France's Gemo.

The November blaze at Tazreen Fashion, which also had no fire department licence, highlighted the Bangladeshi apparel industry's appalling safety record and labour practices. Since then at least 20 garment factories have been gutted.

The fire at the Smart factory employing around 300 workers broke out Saturday afternoon, leaving at least seven female workers dead and 15 injured -- five of them critically.

Worker Laizu Begum said the factory, which paid workers as little as $37 a month, had one of its doors closed when the blaze broke out during lunch break, forcing the workers to rush to the other gate in a stampede.

Fire officials said the stampede caused most of the deaths.

"Burnt foam and clothing created huge smoke. I survived as I was sitting close to a gate," she told AFP.

A senior fire department official said the factory, on the second floor of an old two-storey building, had not received an operating licence from the department.

"The owners set up some sewing machines on a floor without taking care of any safety issues. It did not have any fire exit or fire equipment," he told AFP.

It was not clear whether Smart had won the orders directly from the European companies or was subcontracting for large local factories.

Mohammad Akash, an official with Smart, told AFP the company mainly subcontracts from larger Bangladeshi factories including Mactex based at Mirpur on the northern outskirts of Dhaka. Mactex could not be contacted for comment.

Of the country's 4,500 garment factories, most are small plants housed in residential areas which depend on sub-contracted orders from bigger plants.

Many operate only in peak seasons, especially during Christmas time.

The cause of the latest blaze could not be estabished but fire is a common problem in the factories in Bangladesh, the world's second largest apparel maker.

Most break out or spread due to shoddy buildings or substandard electric wiring. Around 700 people have been killed in garment factory fires in the country since 2006.

The garment industry is the mainstay of the impoverished country's economy, accounting for up to 80 percent of annual exports worth $24.3 billion last year.

Western retailers have criticised the Bangladeshi factories for not ensuring worker safety, but major brands continue to place orders.

Promoted
Listen to the latest songs, only on JioSaavn.com
Some have reportedly increased purchases since the Tazreen fire, due to cheap manufacturing costs.