A Day Of Dread For China's Single Women

Even companies are pushing women to get married, offering extra "dating leave" around the holiday. 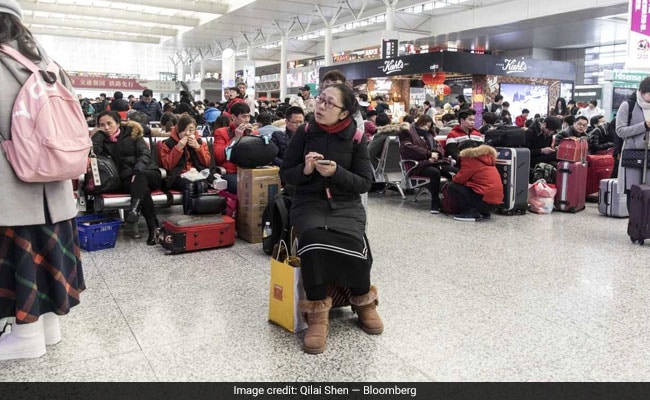 Women are considered "leftover" in many parts of Asia if they haven't married by their mid-20s.

Spare a thought for the single Chinese woman this Lunar New Year holiday.

The remonstrations over their unwed status and the pressure on them to get married are so intense that some of these "leftover women" - the name for women not married by their late 20s - are searching for ways to avoid this family badgering.

Some are asking their bosses for extra work during China's biggest holiday, which falls on Feb. 5 this year. Others are inventing boyfriends.

But still, the pressure mounts. Hospitals are reporting a spike in young people seeking treatment for anxiety.

"I was so afraid last year that I didn't go home. I don't want to go home this year either, but there's no way to avoid going back," said Emily Liu, a 31-year-old who works at a state-owned enterprise and will return to her hometown of Dalian next month. "My parents say, 'Your classmates have children, you don't even have a boyfriend,' " she said. "This is the only topic when I am back home, and they even mobilize all the relatives. The pressure is too great."

Women are considered "leftover" in many parts of Asia if they haven't married by their mid-20s.

But China's economic gains over the past few decades and the creation of a huge middle class have led many women to pursue careers instead of getting married early. Or at all.

This is contributing to a rapid decline in the number of births in China. There were 15.2 million live births in China last year, an astonishing 2 million fewer than the previous year, according to official statistics released last week.

The Chinese government, concerned that this is creating a demographic time bomb as the population ages, abandoned its one-child policy several years ago in an effort to encourage bigger families.

Despite the fact that there are about 33 million more men than women in China, the result of a preference for boys exacerbated by the one-child policy, it is the women who are considered "leftover" rather than the men.

Just as the government campaign to nudge up the birthrate has yet to show much progress, the government - and parents - haven't had much success in encouraging young women to get hitched early. The number of weddings in China has fallen for five years straight. There are 200 million single adults in China.

Now, some companies are joining the effort to change that.

They are encouraging female staff to date and, maybe, tie the knot.

Two companies that run Song Dynasty Town, a tourist attraction in Hangzhou, south of Shanghai, have given an extra eight days' holiday to their single female employees over the age of 30, specifically so they can date over the New Year holiday, the peak season for blind dating in China. That will give them a total of 15 days off.

If any of these women get married before the end of 2019, they will receive double their usual annual bonus.

The companies say they are offering this "dating leave" as a sign of how much they care for their employees.

"Some of our staff are quite busy with work, so we think it's a good idea to give them some extra time for dating," said the companies' human resources manager, Huang Lei.

Elsewhere in Hangzhou, a middle school is offering teachers two half-days of "love leave" each month.

About 40 percent of the school's teachers are unmarried, so the school introduced the "love leave" to help them, the principal told local media.For both genders, married teachers without children can also apply for the time off as "family leave" or "happiness leave."

Some single women are intrigued by the idea - even as some commentators online have complained about discrimination against single men.

"It's good for some employees who are too busy to date," says Peng Mei, a 38-year-old officer worker in Chengdu. But she sees other benefits. "Or they can simply take the leave and use it for vacation since the company doesn't require the details of the dating."

She did wonder, however, who the women were supposed to be dating on their days off, because men weren't being given time off, too. (China is socially conservative when it comes to same-sex relationships.)

Many single women over the age of 25 dread the idea of returning home for the holiday and being hectored about being single and enduring relentless matchmaking efforts. Some 85 percent of 26- to 30-year-old singletons say their parents have urged them to hurry up and get married, according to a survey last year by Zhenai.com, a popular dating site.

Shen, a 25-year-old woman from Ningbo who asked that only her surname be used, went to great lengths to avoid this browbeating:She spent a month photo-editing 10 pictures to show herself with a famous actor called Liu Haoran.

She sent them to her parents, presenting the young man as her boyfriend. They were overjoyed.

Then she saw that one of her father's friends had posted about the news on WeChat, the ubiquitous social media app.

"Last night, I dreamed that my daughter was married. I cried so much and woke up for several times," Shen's father said, according to his friend. "I've started practicing the speech for my daughter's wedding day."

When Shen saw the post, she was overcome with guilt and admitted on Weibo, China's answer to Twitter, what she'd done. Her confession struck a chord with millions of singles in the same position.

Her parents, clearly missing the point, told her not to worry about the fabrication and to just get on with blind dating, Shen told Pear Video, a popular short-video platform, after her messages went viral. The video was watched more than 200 million times in the 24 hours after it was posted.

A 35-year-old woman with a doctorate, identified only as Dong, was also trying to avoid her parents and their nagging. She's not only a "leftover woman." She also falls into the category of "three highs" - high level of education, high level of income and high age.

She's sick of being "besieged" by relatives and other busybodies over the holiday, so she hoped to escape into her job, Dong told the Qianjiang Evening News in Hangzhou. She asked her boss to let her work over the Lunar New Year holiday.

Her boss declined her request. She had more-urgent business to attend to, he said. He is about the same age as her parents and clearly sympathized with them, not with his employee.

"Escaping won't change the reality. You can solve your problems only by confronting them," Dong quoted him as saying. "The holiday is a good opportunity for socializing and you should try to meet more people, keep your eyes open, take the initiative to reach out, and you'll probably find your Mr. Right."

Turning on the television won't necessarily provide respite. Many popular dating shows involve parents on the stage choosing potential spouses for their children.

A new show that debuted in Hunan province this week, called "Meeting Mr. Right," shows fathers watching videos of their daughters going out with men and commenting on their dating techniques.

A popular reality show with a similar concept - moms and dads commenting on footage of their daughters - showed parents urging their daughters to marry 23 times in the space of three episodes, according to a count by the Beijing News. The program was "producing anxiety," one TV critic said.