For Barack Obama, a second chance 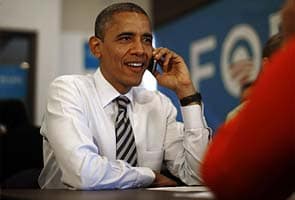 Washington: Barack Obama swept into the White House four years ago as an agent of change. The nation's first black president won re-election on Tuesday as a steady-as-she-goes defender of a new status quo.

With a second term, Obama also wins a second chance.

Obama may never become the unifying figure he promised to be in the 2008 race, but he will have four more years to try to enact sweeping changes that could affect the United States for decades.

It won't be easy. Obama has been blocked in Congress ever since the 2010 elections, when Republicans took control of the House of Representatives, and that's not likely to change. Breaking through the gridlock will be just as difficult.

Obama's modest second-term agenda so far illustrates his diminished clout in Washington. Republicans retained their hold on the House of Representatives and they have a large enough presence in the Senate to tie that chamber in knots. His narrow victory is likely to leave them unimpressed.

Right off the bat, he faces a potential crisis known as the "fiscal cliff" - tax increases and automatic spending cuts that threaten to throw the country into another recession.

While he brought U.S. combat in Iraq to a close and is drawing down in Afghanistan, he will have to rein in Iran's nuclear ambitions, along with the chance of an Israeli counterstrike.

Inevitably, the president may bring to his second term the hard lessons of his first.

"He was a figure who promised to transform the way politics worked," said Julian Zelizer, a presidential historian at Princeton University. "I don't think people think that anymore. It's not just less faith in him, it's less faith in what the political system can do."

If Obama did not change Washington the way many hoped, he can build on many notable successes.

He won a historic expansion of healthcare that had eluded Democratic presidents since the 1940s. Though voters like many of its components, they have been less enamored of "Obamacare" as a whole. He now will have the opportunity to prove its worth.

The same may be said for the Dodd-Frank financial reforms, which aim to rein in some of Wall Street's worst excesses.

Obama's legislative attempt to curb global-warming emissions died in the Senate, but he can continue the effort through regulation. He can also continue an effort to create millions of "green" jobs, which has so far fallen far short of its goals.

He came nowhere near his goal of cutting trillion-dollar budget deficits. He will rejoin that battle as soon as this week.

But for many voters, these issues were pushed aside by the economy, which plunged into a deep recession in the final months of 2008.

Here, too, Obama can point to success: his 2009 stimulus created millions of jobs and blunted the impact of the worst recession since the 1930s. The domestic auto industry, on the verge of collapse in 2009, has been restored to health.

The country avoided economic catastrophe but robust growth remains elusive. As Obama won re-election, 23 million Americans were either unemployed, underemployed, or too discouraged to look for work.

Obama's cautious approach to the housing crisis did little to stem an epidemic of foreclosures or help those left deep in debt by plunging real-estate values. A follow-up stimulus stalled in Congress as the administration focused on its healthcare and Wall Street reforms.

Though Obama was the first sitting member of Congress to win the presidency since President John F. Kennedy in 1960, his relations with Capitol Hill were problematic at best.

A private person by nature, Obama shied from the backslapping and arm-twisting that is often needed to advance an agenda in Washington. Democratic lawmakers grumbled privately that he cared little for their political concerns.

Republicans opposed his initiatives in an unprecedented manner, providing few, if any, votes for his major initiatives. In the Senate, action slowed to a crawl as Republicans threw up a record number of procedural hurdles.

The dysfunction came to a climax during the debt-ceiling battle of 2011, which brought the country to the brink of default. Consumer confidence plummeted and credit-rating agencies issued a historic downgrade of the country's debt.

It's unclear whether Obama could have done much to break the logjam on his own.

Congressional scholars Norm Ornstein and Thomas Mann, who have studied Washington for 40 years, argued in their book "It's Worse Than It Looks" that the Republican Party has become an ideologically extreme "insurgent outlier" with little interest in the compromises needed to run a vast and diverse country.

But Republicans would have been willing to work with Obama when he took office had he shown some independence from his own party, said former Bush aide Tony Fratto.

Obama's relationship with the business community has been rocky as well. Corporate leaders complained that their White House meetings seemed more like photo opportunities than policy sessions.

Wall Street turned against the administration in the wake of the 2010 financial reforms and even prominent Democratic figures like J.P. Morgan Chase CEO Jamie Dimon accused Obama of demonizing the financial industry.

The "grand bargain" that would set U.S. finances on a sustainable path will remain as elusive as ever, as investors continue to snap up U.S. debt at rock-bottom interest rates and lawmakers face little pressure from their constituents to make the sorts of painful concessions that will be needed to reach a deal.

Republicans might determine that it is in their best interest to cooperate on an immigration overhaul, but they will want to negotiate on their terms.

The economy could give Obama a much-needed tailwind in his second term as employment, consumer confidence and a range of other measures indicate that the recovery may finally be taking hold.

An improved economy could solve some of Obama's problems by narrowing budget deficits, putting more Americans back to work and vindicating many of the decisions he made in his first year in office.

For a president who has seen much of his first term hijacked by the sluggish economy, that would be an ironic turn of events.

"The 2008 presidential election had the effect of raising expectations to a level that would have been very difficult to satisfy even in the best of circumstances. And the circumstances have not been the best," said William Galston, a Brookings Institution scholar and former policy adviser to President Bill Clinton.