Before Hurricane Irma makes landfall in Florida, more than 5 million people across the state were ordered to leave threatened areas, one of the largest emergency evacuations in U.S. history. 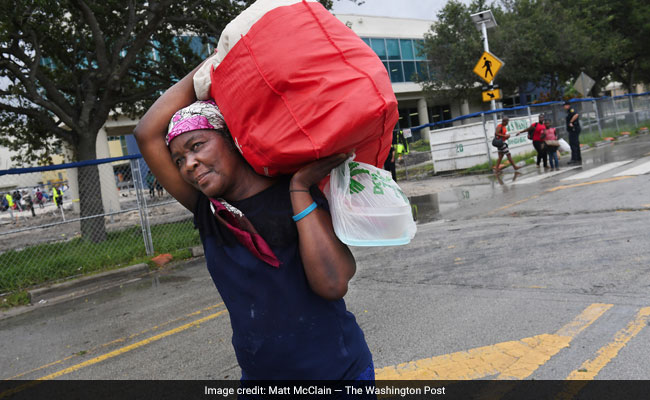 Hurricane Irma: People head to a shelter at Florida International University in Miami.

MIAMI: Hurricane Irma began its destructive barrage on Florida on Saturday, with brutal leading winds flattening trees and knocking out power across the southern tip of the state in what residents feared were the opening blows of a historically devastating storm.

The hurricane, leaving a wake of at least 25 dead on battered Caribbean islands, roared toward the mainland with thousands of residents still on the move. More than 5 million people across the state were ordered to leave threatened areas, one of the largest emergency evacuations in U.S. history.

Some were forced to flee more than once as the storm's changing path shifted the bull's eye of panic from the east side to the west side of the peninsula. Officials along the Gulf Coast scrambled to open shelters for a stampede of residents newly alarmed when Irma swung her fury their way. Thousands were lined up to enter an arena in Naples even as wind gusts climbed above 75 mph at some South Florida airports.


Video: Residents of a mobile home neighborhood in Miami are not taking any chances with Hurricane Irma. 'I'm scared to stay over here,' says Miami resident Ines Martinez. She and her neighbors are preparing to evacuate their mobile homes.

The National Hurricane Center downgraded Irma to a Category 3 storm Saturday, with maximum sustained winds of 125 mph. But after pounding Cuba, the storm was drawing strength from the Atlantic as it spun northward and was expected to make landfall in the Florida Keys around 5 a.m. Sunday as a Category 4 storm, driving a storm surge of 5 to 10 feet toward parts of the Keys.

The center of the storm is now expected to head up the state's west coast, with Naples, Fort Myers and Tampa bearing the brunt. But Irma's sprawling size could produce hazards across the breadth of the state, with all of Florida likely to experience damaging winds, rains, flooding and possibly tornadoes. Storm surges are still a danger on the east coast.

"This is a deadly storm, and our state has never seen anything like it," Scott said in one of his repeated appeals for residents to seek shelter.

Miami-Dade Emergency Operations Center, Fire Chief Dave Downey said rescue teams would deploy as soon as conditions allowed his department's helicopters to take off from Orlando, where they had been moved to safety. 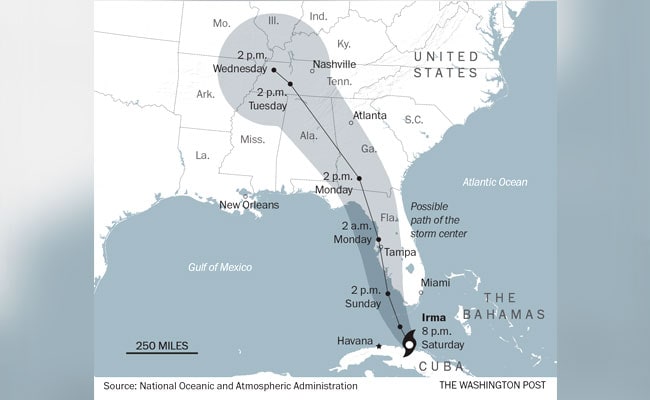 Florida Power and Light said 4.1 million people could lose power as a result of the storm. At least 76,000 people had already lost power across the state as of Saturday evening.

Counties including Broward issued curfews, and at least 70 more shelters were open Saturday. At least 75,000 people are staying in about 400 shelters across the state. Scott implored nurses to volunteer throughout Florida; the state desperately needs 1,000 nurses in its special-needs shelters.

In Estero, on the west coast, thousands of people wrapped around the massive Germain Arena, which officials opened as a shelter Saturday with a capacity of 7,000 to 8,000. At least six ambulances responded to people who were overcome in the muggy, 90-degree heat. Troopers, the National Guard and local police sought out people in wheelchairs and moved them to the front of the line, said Lt. Greg Bueno, public information officer for the Florida Highway Patrol.

Leaning on a cane, Betty Sellers, 68, and her son, Doug, 49, got in line at 9:30 a.m. and were still 100 people away from the front doors. They had driven up to Estero from Naples because "the shelters were mostly closed there," she said.

Officials at the Collier County emergency operations center in Naples said that 15,000 people filled all its shelters but that they were trying to expand space to accommodate more people. Demand exceeded expectations as the latest forecasts showed the area likely to be near the center of Irma's path. .

Officials are also concerned that wind gusts will send water over the Herbert Hoover Dike at Lake Okeechobee, which covers more than 700 square miles. Evacuations were ordered for cities and towns on the south side of the lake.

Trying to outrun Irma has tested the patience and pocketbooks of thousands of Floridians who evacuated from one part of the state to another, only to find the hurricane had tricked them. 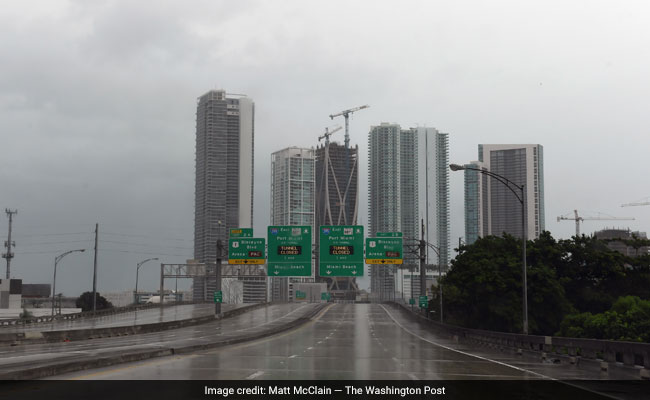 The outer bands of Hurricane Irma arrive in Miami.

"I think the storm is chasing my dogs," said John Fitzgerald, a stock trader from Miami.

Fitzgerald was checking into the Hilton DoubleTree in Gainesville, hours after evacuating from a hotel in Tampa, his original destination. When Irma's projected path shifted west, hotels started asking guests to get out and he headed inland.

Still, this became a ghost metropolis, with boulevards empty of cars and people as far as the eye could see. A place famous for chaotic and crowded traffic had utterly empty roads and highways.

More than 28,000 people had taken refuge in county shelters by late Saturday. Countless more were simply holed up behind their metal hurricane shutters. Almost every business had closed.

On Biscayne Boulevard, tiny L and R Grocery stayed open through the afternoon. On Coral Way, a place called Vicky Bakery, selling pastelitos and cafe con leche, stayed open and drew a crowd. But all the gas stations had pumps wrapped in plastic.

Hector Perez, 34, his cousin Madelyn Loria, 35, and her teenage children made a special trip to the historic Deering Estate on Biscayne Bay to see the first signs of the storm surge. "We're true Miamians!" Perez said.

The storm clobbered Caribbean islands. In St. Martin, 25 U.S. citizens were evacuated on a C-130 military aircraft Friday from Sonesta Great Bay Beach Resort. Michael Joseph, president of the Red Cross in Antigua and Barbuda, said Barbuda is "uninhabitable" and in a "total blackout," with almost all of its infrastructure wiped out.

Since early Wednesday, when Irma tore across St. Martin, Gretchen and Peter Bogacz have been hunkered down at the Hotel L'Esplanade with no power or running water, trying to find out if assistance was on the way. The airport was seriously damaged.

Meanwhile, Irma was headed toward their 12-year-old daughter, Isabella, as well as Peter Bogacz's parents, who planned to ride out the storm together at home in Sarasota, Florida.

Gretchen's sister, Natalie Grinnell, is urgently monitoring the forecasts from her home in Spartanburg, South Carolina.

"My worry for my loved ones is pervasive," she wrote in an email to The Post.

In the United States, local, state and federal officials delivered ominous warnings, making clear how much danger they think the Sunshine State could face in coming days. William "Brock" Long, administrator of the Federal Emergency Management Agency, urged people from Alabama to North Carolina to monitor and prepare for the storm, calling it "a threat that is going to devastate the United States, either Florida or some of the southeastern states."

About 540,000 people in Georgia have been ordered to evacuate. Airports throughout Florida and in Savannah, Georgia, were closed. Disney World is closed Sunday and Monday, with resort hotels staying open.

In Key West, Florida, where officials bluntly told residents to "get out" and emergency personnel evacuated, some locals refused to budge.

"It's going to be a fun ride," said Jason Wasser, who had had a few drinks at Don's Place. "All of our friends are here, our family, why bother leaving? We're all going to die eventually, so why not have a good time with it?"

In Miami, some also stayed put. On Friday night, South Beach was deserted, shelters were overflowing and last-minute preparations were underway.

But it wouldn't be Miami if the nightlife completely died with the storm.

Locals packed bars in Coconut Grove, drinking and watching the U.S. Open and the Miami Marlins game. There was a 45-minute wait for a table at Happy Wine. The restaurant alerted people that it was business as usual by writing "We're Open" in big red letters on the plywood that covered its windows.

Promoted
Listen to the latest songs, only on JioSaavn.com
Achenbach and Stein reported from Miami, and Hendrix and Zezima reported from Washington. Patricia Sullivan in Estero, Scott Unger in Key West, Florida, Leonard Shapiro in Pompano Beach, Florida, and Lori Rozsa in Gainesville, Florida; and Lori Aratani, Mark Berman, Thomas Gibbons-Neff, Matea Gold and Jason Samenow in Washington contributed to this report.