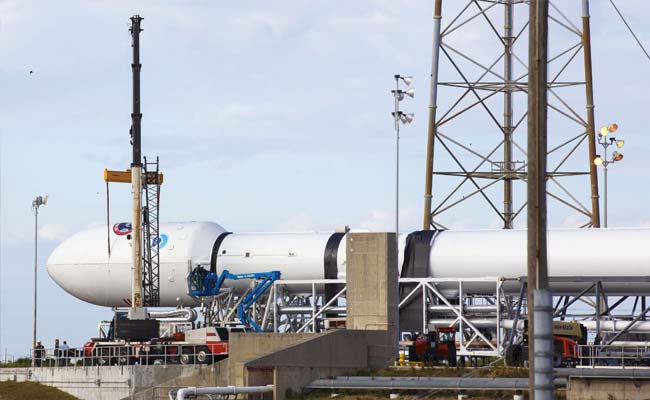 High winds over Florida on Tuesday prompted the second delay of the launch of a SpaceX Falcon 9 rocket carrying a US satellite to watch for solar storms, NASA said.

Across the country, a SpaceX Dragon cargo ship returning from the International Space Station remained on track for a 4:44 pm, local time, splashdown in the Pacific Ocean.

Space Exploration Technologies, or SpaceX, will try again today at to put the Deep Space Climate Observatory, or DSCOVR, into an initial parking orbit about 115 miles above Earth.

The satellite is designed to serve as a weather buoy to provide about an hour's advance notice of potentially dangerous solar storms, which can disrupt radio communications, satellite signals and power grids on Earth.

Once in its final orbit, the satellite will also monitor the sunlit side of Earth, tracking volcanic plumes, measuring ozone and monitoring droughts, flooding and fires.

A camera aboard DSCOVR will take pictures every two hours of Earth, which will be posted on the Internet the next day.

The last Falcon rocket to fly nearly made it back intact, but ran short of hydraulic fluid to maneuver steering fins and crashed into the platform.

For the second attempt, engineers added an extra reservoir of hydraulic fluid, but the rocket will be coming in with nearly twice the force and four times the heat, SpaceX founder and Chief Executive Elon Musk said on Twitter.

Launch of DSCOVR had been planned for Sunday, but was delayed due to a problem with an Air Force radar system needed to track the rocket during flight.

Across the country, a SpaceX team awaited the return of the company's seventh Dragon cargo ship.

Promoted
Listen to the latest songs, only on JioSaavn.com
Astronauts aboard the space station released the gumdrop-shaped capsule into orbit as the vehicles sailed 257 miles over Australia.

The Dragon, loaded with nearly 4,000 pounds of returning science experiments and equipment, is due to make a parachute landing in the Pacific Ocean about 260 miles southwest of Long Beach, California.
© Thomson Reuters 2015