Bavaria and Saxony are among the hardest hit regions in the ferocious fourth Covid wave sweeping Germany. 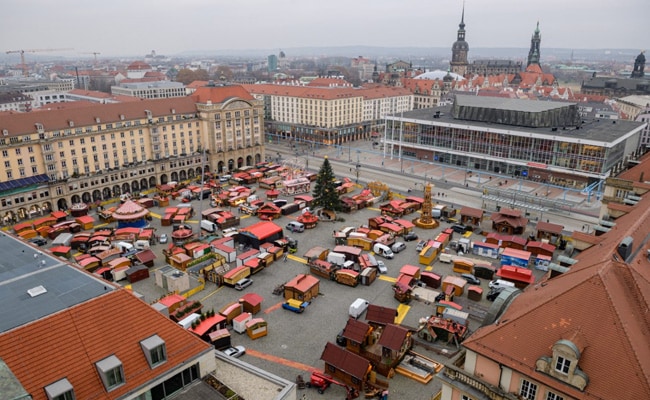 Saxony premier admitted that many of the restrictions would affect the vaccinated as well.

The German states of Bavaria and Saxony on Friday cancelled all their Christmas markets and unveiled drastic curbs on public life as the country scrambles to contain soaring coronavirus infections.

"The situation is very, very serious and difficult," Markus Soeder, premier of the southern state of Bavaria, said as he also announced a shutdown of clubs, bars and night service at restaurants.

The eastern state of Saxony unveiled similar measures and went even further by closing all sporting and cultural venues, banning tourism, public consumption of alcohol and barring the unvaccinated from non-essential shops and hairdressers.

Saxony premier Michael Kretschmer -- whose state has Germany's lowest vaccination rate at just under 60 percent of the population -- admitted that many of the restrictions would affect the vaccinated as well.

But he said tough action was needed to keep hospitals from being overwhelmed and called for "solidarity" from all citizens. "We need more 'we' and less 'I' in this pandemic," he told reporters.

Bavaria and Saxony are among the hardest hit regions in the ferocious fourth Covid wave sweeping Germany.

While Germany had a weekly incidence rate of 340.7 recorded infections per 100,000 people on Friday, according to the Robert Koch Institute health agency, the figure was far higher in Saxony (593.6) and Bavaria (625.3).

The Bavarian state capital of Munich on Tuesday had become the first major German city to cancel its Christmas market for the second year in a row. Saxony's cancellations means the famed Dresden Christmas market is also scrapped.

Germany hosts some 2,500 Christmas markets each year, cherished by visitors who come to savour mulled wine and roasted chestnuts, and shop for seasonal trinkets among clusters of wooden chalets.

In pre-pandemic times, they drew about 160 million domestic and international visitors annually who brought in revenues of three to five billion euros ($3.4 billion to $5.6 billion), according to the BSM stallkeepers' industry association.

"It's a catastrophe for us," Eleonore Stiegel, who operates a stand at the Christmas market in the historic town of Bamberg, told AFP.

"We have already bought our wares and now are left with nothing for the second year in a row."

Konrad Friedrich, who also plies his trade at the Bamberg market, said he could understand the decision given the explosion in infections.

"What's more important? The market or health?" he said. "Health, of course."

In addition to the new nightlife restrictions, Bavarian sport and culture venues will be subject to a 25-percent capacity limit and retail outlets will have to restrict customer flows, Soeder said.

Parts of Bavaria with incidence rates above 1,000 -- eight districts on Friday -- will face even stricter curbs with only daycare facilities, schools and shops allowed to continue operations until at least mid-December.

In Saxony, such hotspots will see a curfew for the unvaccinated from 10:00 pm, the state's health minister Petra Koepping said.

Chancellor Angela Merkel and the leaders of Germany's 16 states agreed Thursday to shut the unvaccinated out of restaurants, sporting events and cultural shows nationwide after new cases soared to an all-time daily high of more than 65,000.

However the director of the Robert Koch Institute, Lothar Wieler, told reporters Friday that with the exponential rise in infection levels, the curbs would be insufficient to contain the latest surge.