Eleven men out of a group of 22 were pulled out alive by rescue workers on Sunday after a January 10 mine blast in east China's Shandong province entombed them hundreds of metres underground. 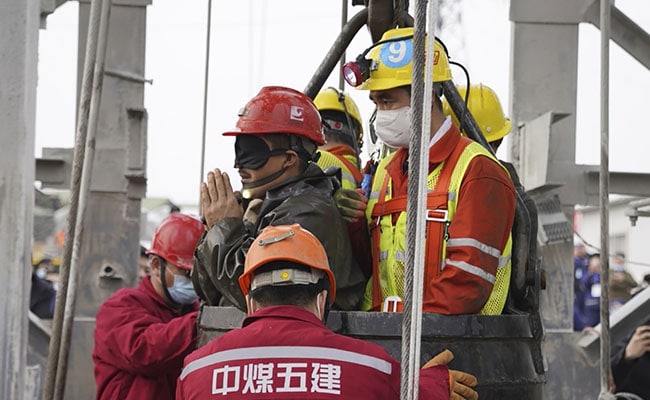 One of 22 Chinese miners is saved from hundreds of metres underground.

Two Chinese miners who were dramatically rescued after being trapped underground for two weeks described on Tuesday their joy and relief at being free.

Eleven men out of a group of 22 were pulled out alive by rescue workers on Sunday after a January 10 mine blast in east China's Shandong province entombed them hundreds of metres underground.

"I feel like I am reborn," one of the miners, surnamed Du, was quoted as saying by state broadcaster CGTN Tuesday, wearing pyjamas as he spoke to reporters from his hospital bed.

"We had no food to eat for the first nine days," he added. "There are no words to describe the feeling (of being rescued). So relieved."

Du was part of a group of 11 miners who first made managed to make contact with rescuers on January 17 by sending up a note though a long shaft drilled down into the rock.

They were then sent food and medicine and phones to communicate.

"We knew clearly how hard it was to drill that deep. We were trapped nearly 600 metres below ground. It was a daunting task," another survivor surnamed Wang told CGTN. "We are so happy."

One of the first group died last week of head injuries sustained from the explosion, while a further nine workers found in a different part of the mine were confirmed dead on Monday, according to local officials.

Rescue teams are searching for one further miner, who remains unaccounted for.

The survivors are currently all in "stable" condition and receiving hospital treatment, local officials said Monday.

"We comforted each other with encouraging words. That's how we pulled through," said Du from his hospital bed, adding that some of the group were "pessimistic, while others were hopeful."

Emergency workers had been battling difficult conditions, including high waters in parts of the mine, to drill several holes to reach the trapped miners.

Another miner was found alive by rescuers as they attempted to reach the group of ten on Sunday.

Both the local Communist Party secretary and the mayor have been sacked over the 30-hour delay and an official investigation is under way to determine the cause of the explosion.