The bureau has contacted Deborah Ramirez, a Yale University classmate of Brett Kavanaugh's who alleges that he shoved his genitals in her face at a party where she had been drinking and become disoriented, her attorney said Saturday. 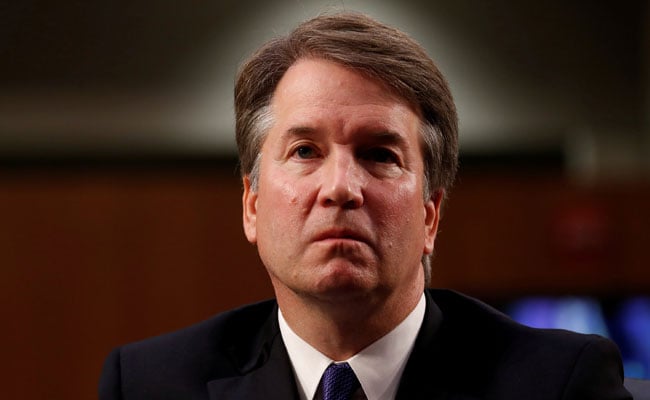 The FBI has begun contacting people as part of an additional background investigation of Judge Brett Kavanaugh, including a second woman who alleges that the Supreme Court nominee sexually assaulted her.

The bureau has contacted Deborah Ramirez, a Yale University classmate of Kavanaugh's who alleges that he shoved his genitals in her face at a party where she had been drinking and become disoriented, her attorney said Saturday.

"She has agreed to cooperate with their investigation," Ramirez attorney John Clune said in a statement. "Out of respect for the integrity of the process, we will have no further comment at this time."

President Donald Trump ordered the new background investigation of his nominee on Friday under pressure from key members of his party.

Late Saturday, the president said the FBI probe would be exhaustive, but the Senate Judiciary Committee on Friday afternoon said that the supplemental investigation would be limited to "current, credible allegations." And a lawyer for one woman who has accused Kavanaugh of misconduct said his client had not been contacted.

In brief remarks to reporters before leaving for a rally in West Virginia, the president said the FBI is "all over talking to everybody. . . . They have free rein, they can do whatever they have to do, whatever it is that they do. They'll be doing things we have never even thought of."

But Michael Avenatti, an attorney for Julie Swetnick, who alleged that Kavanaugh and another boy got teenage girls drunk at parties, where the girls were sexually assaulted, sometimes by groups of boys, said Saturday that Swetnick has not been contacted by the bureau.

Swetnick said in a sworn statement this past week that she knew Kavanaugh in high school and was raped by such a group at a party where Kavanaugh and his friend Mark Judge were present. She has not accused Kavanaugh of raping her. Swetnick described Kavanaugh as a "mean drunk" in high school who was physically and verbally aggressive with girls.

"We have not heard anything from the FBI, and with each passing hour, I'm growing increasingly concerned that this is a sham of an investigation," Avenatti said. He noted that Swetnick has had multiple security clearances and said that lying in a sworn declaration would be disastrous to her career.

"Why would Miss Ramirez be questioned but not my client?" he asked. "Donald Trump is not supposed to be determining who is credible. That's the job of the FBI."

Trump reiterated his defense of his nominee for the high court, calling him a "good man" and a "great judge." The president also said the FBI investigation "will be a blessing in disguise. It will be a good thing."

Kavanaugh has denied the accusations by Ramirez and Swetnick and has said emphatically that he never abused or assaulted anyone. He also has pointed to half a dozen other background checks the FBI conducted on him for other federal positions over the years, none of which surfaced evidence or allegations of sexual assault.

The FBI also is following up on allegations by Christine Blasey Ford, a psychology professor at Palo Alto University in California, who testified to the Senate last week that Kavanaugh sexually assaulted her in the early 1980s when they were in high school in suburban Washington, District of Columbia.

Sen. Jeff Flake, R-Ariz., a member of the Judiciary Committee, had pressed for the FBI probe and a delay in voting on the nomination. Asked on Friday about "current, credible allegations" that should be investigated, Flake said, "We'll leave that to the FBI."

White House spokesman Raj Shah said on Saturday: "The scope and duration has been set by the Senate. The White House is letting the FBI agents do what they are trained to do."

A Judiciary Committee spokesman on Saturday declined to elaborate beyond the panel's initial statement.

Democrats were not included on a call that Republican staff of the Senate Judiciary Committee held with the White House discussing the FBI investigation, according to an official familiar with the discussion who spoke on the condition of anonymity.

Trump, in his remarks to reporters, also said he wants to know who leaked a confidential letter by Ford that was sent to Sen. Dianne Feinstein, Calif., the top Democrat on the Judiciary Committee, and suggested it could have been the California lawmaker.

Feinstein said at Thursday's hearing that she did not leak the letter nor did anyone on her staff. Ryan Grim, the reporter for the Intercept who first reported on the existence of Ford's letter, has also said neither Feinstein nor her aides were his sources.

During Thursday's testimony, Ford recounted in detail how Kavanaugh and Judge allegedly attacked her in a bedroom during a small gathering at a house when she said the teen boys were both drunk. Ford said the alleged attack has caused her lasting trauma, and she was visibly anguished as she recalled the events Thursday before the Senate Judiciary Committee.

Following Ford's testimony, Kavanaugh vigorously denied the allegations before the committee and accused Democrats of launching a last-minute attempt to derail his nomination. He decried the confirmation process as a "circus."

Each of the people Ford identified as being at the gathering - Judge, Leland Keyser and Patrick J. Smyth - has said they will cooperate with the FBI.

An attorney for Keyser, a friend of Ford's, said that Keyser has no recollection of the party where Ford alleges Kavanaugh assaulted her.

"Notably, Ms. Keyser does not refute Dr. Ford's account, and she has already told the press that she believes Dr. Ford's account," the attorney, Howard Walsh III, wrote in an email to the Senate Judiciary Committee. "However, the simple and unchangeable truth is that she is unable to corroborate it because she has no recollection of the incident in question."

Judge, the high school friend of Kavanaugh's who Ford says was in the room during the alleged assault, also has agreed to cooperate with the FBI. His account has been particularly sought after because, unlike Kavanaugh, Judge has not denied Ford's allegations but has said he has no memory that such an assault occurred.

Ford told the Judiciary Committee that some weeks after the alleged assault she ran into Judge at a grocery store where he was working for the summer.

"I said hello to him. His face was white and very uncomfortable saying hello back," she said. "He was just nervous and not really wanting to speak with me, and he looked a little bit ill."

According to Ford, a boy named "PJ" was also at the gathering but not in the room where the alleged assault occurred.

Last week, Smyth, who attended Georgetown Prep high school with Kavanaugh, told the Judiciary Committee that he had no knowledge of the gathering or of any improper conduct by Kavanaugh. On Friday, Smyth said through his lawyer that he was "happy" to cooperate with the investigation.

On Friday, Republicans on the committee voted to proceed to a full Senate vote on Kavanaugh's nomination, but back-room negotiations led to a surprise twist in what has already been a wrenching confirmation process for a Supreme Court nominee, among the most polarizing in recent memory.

Flake, a key swing vote to confirm Kavanaugh, said he would vote to proceed to a full Senate vote, but that the Senate vote should be preceded by a new, expanded FBI investigation of the allegations against Kavanaugh.

Recognizing that Flake and a handful of other senators' votes appeared contingent upon the investigation, Republican leaders and the White House relented. Later that day, Trump ordered the investigation and that it be limited in scope and completed by Friday.

Lawmakers and Trump administration officials had few expectations that the FBI would settle Ford's and Kavanaugh's dueling accounts. A background investigation is, by its nature, more limited than a criminal probe, and FBI agents will not be able to obtain search warrants or issue subpoenas to compel testimony from potential witnesses. The FBI's interviews, which will take a few days to conduct, won't turn into a sprawling inquest of everyone Kavanaugh went to a party with in high school, said a person familiar with the investigation.

The FBI's findings will not necessarily become public. When investigators have completed their work, anything they've discovered will be turned over to the White House as an update to Kavanaugh's background check file. The White House would then likely share the material with the Senate committee.

At that point, all senators, as well as a very small group of aides, would have access to it.

The White House or the Senate would decide what, if anything, should be released publicly. The bureau's work will probably consist mostly of reports of interviews with witnesses and accusers. The bureau will not come to a conclusion on whether the accusations are credible and will not make a recommendation on what should become of Kavanaugh's nomination.