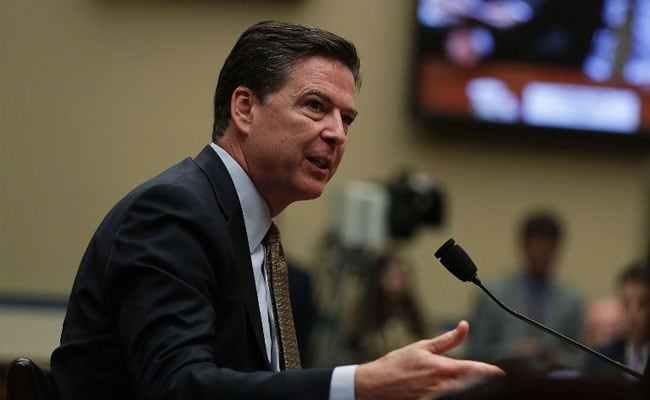 FBI chief James Comey has said that he did not know if anything of significance was in the emails.

The Justice Department moved Monday to quell the outrage and frenetic speculation surrounding FBI Director James Comey's disclosure last week that the bureau has resumed its investigation of Hillary Clinton's private email server after discovering a new trove of emails.

The department signaled that it now wants the politically charged investigation to follow standard procedures, including a strict limit on official comments about the probe and the provision of updates to Congress through routine channels.

But after Comey's highly unusual disclosure last week rocked the final days of the presidential campaign, it may prove impossible for Justice to lower the temperature and regain control over how the investigation is conducted and depicted to the public.

On Monday, criticism of Comey continued to mount, notably from prominent law enforcement officials. Democrats and Republicans alike on Capitol Hill amplified their demands that Comey and Attorney General Loretta Lynch provide a more detailed account of the investigation into the emails, which were found on a computer belonging to former representative Anthony Weiner, D-N.Y., earlier this fall.

Justice is a staid and secretive department, and on Monday officials tried to restore that traditional bearing, trying to tamp down the highly public disclosures about a confidential investigation.

Justice officials said there will be no further statements or news conferences about the Clinton investigation until it is completed. The FBI has designed software to sift through thousands of emails found on Weiner's computer and identify any that are to or from Clinton.

The department also sent a three-paragraph letter to six lawmakers saying it would move quickly in pursuing the renewed investigation into emails potentially tied to Clinton's server. The letter was sent by the department's head of legislative affairs - not Comey or Lynch - in a return to standard practice.

"The Department of Justice appreciates the concerns raised in your letter," wrote Assistant Attorney General for Legislative Affairs Peter Kadzik, addressing lawmakers who had asked Comey and Lynch for more details. In particular, the lawmakers had pressed for details about the investigative steps being taken by the FBI, the number of emails involved and the steps being taken to determine how many of the emails duplicate those already reviewed by the FBI.

"We assure you that the Department will continue to work closely with the FBI and together, dedicate all necessary resources and take appropriate steps as expeditiously as possible," Kadzik wrote, adding no new details about the investigation. "We hope this information is helpful."

It was not, according to several lawmakers and their staffs.

"We are not satisfied," said a staffer for Rep. Elijah Cummings, D-Md., who was one of the congressmen who received the letter, along with Democratic Sens. Thomas Carper, Del., Patrick Leahy, Vt., Dianne Feinstein, Calif., and Benjamin Cardin, Md., and Rep. John Conyers Jr., D-Mich.

Sen. Charles Grassley, R-Iowa, chairman of the Senate Judiciary Committee, wrote Comey Monday saying that the disclosure provided to Congress last week "did not go far enough" and was unfair to Congress, the American people and Clinton.

"In the absence of additional, authoritative information from the FBI in the wake of your vague disclosure, Congress and the American people are left to sift through anonymous leaks from Justice Department officials to the press of varying levels of detail, reliability, and consistency," Grassley wrote. "The American people deserve better than that."

The senator asked Comey to answer by Nov. 4 a series of questions about the discovery of the emails and what the FBI has learned about their contents.

"However, the fact remains that the Director's disclosure has invited considerable, uninformed public speculation about the significance of newly-discovered material just days before a national election," the group wrote. "For this reason, we believe the American people deserve all the facts, and fairness dictates releasing information that provides a full and complete picture regarding the material at issue."

Comey set off a firestorm Friday by telling the chairmen of eight congressional committees that the FBI would take "appropriate investigative steps" to determine whether newly discovered emails found in an unrelated investigation contain classified information and to assess whether they are relevant to the investigation involving Clinton's private email server. The unrelated case was an investigation of Weiner, who is accused of having explicit exchanges with a 15-year-old girl. Weiner is the estranged husband of top Clinton aide Huma Abedin.

Justice officials have said that before Comey notified Congress, they warned him that doing so would go against long-standing practices of the department not to comment on ongoing investigations and not to take steps that could be viewed as influencing an election.

However, officials familiar with Comey's decision said that he felt a sense of obligation to lawmakers to "supplement" his testimony under oath in July that the Clinton investigation was complete and there would be no charges. Comey was also concerned that word of the new email discovery would leak to the media and raise questions of a coverup, the officials said.

Comey's disclosure about the Clinton probe is particularly striking, national security officials said, because he had argued against the administration publicly accusing Russia of trying to meddle in the 2016 election as a move that would seem too political too close to Election Day. Comey eventually supported the administration's Oct. 7 denunciation, which alluded to hacks of Democratic Party organizations, in part because it did not have the FBI's name was not on it, officials said. Comey's position was first reported by CNBC.

One official said the total number of emails recovered in the investigation into Weiner is close to 650,000, although that reflects many emails that are not related to the Clinton investigation. But officials familiar with the case said that the messages include a significant amount of correspondence associated with Clinton and Abedin.

The FBI has software that can quickly search for words or phrases to identify any emails that might contain material that was originally classified. It also should not take long to determine if there are emails that are duplicates of ones already collected in the probe, bureau experts said.

But if the bureau finds emails that contain potentially classified information, getting those analyzed could take weeks because the agencies whose information was being discussed would need to review them, officials said.

White House press secretary Josh Earnest praised Comey on Monday as "a man of principle . . . integrity and talent" and said that Obama, who nominated Comey three years ago to serve a 10-year term, does not believe that he is trying to influence the presidential election.

Earnest said that the president believes it is important for the "norms, traditions and guidelines" surrounding FBI investigations to be followed. But Earnest said repeatedly that he would "neither defend nor criticize" Comey's decision, saying he lacked the independent knowledge to weigh in.