Fate of Hugo Chavez's movement in Venezuela uncertain after death 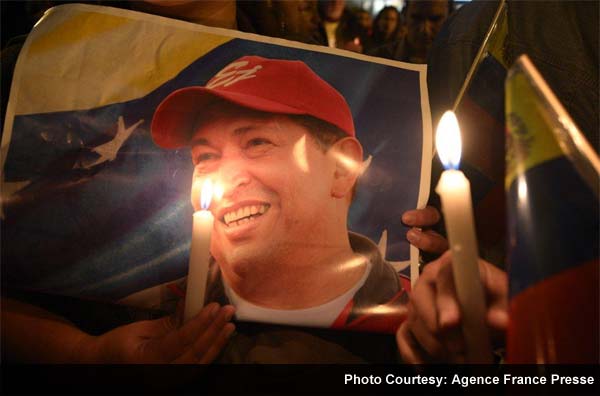 Caracas: President Hugo Chavez of Venezuela died Tuesday afternoon after a long battle with cancer, the government announced, leaving behind a bitterly divided nation in the grip of a political crisis that grew more acute as he languished for weeks, silent and out of sight in hospitals in Havana and Caracas. (Read: Who is Hugo Chavez?)

With his voice cracking and close to tears, Vice President Nicolas Maduro said that he and other officials had gone to the military hospital where Chavez was being treated, sequestered from the public, when "we received the hardest and most tragic information that we could transmit to our people."

Chavez supporters set fire to tents and mattresses used by university students who had chained themselves together in protest several days ago to demand more information about Chavez's condition.

"Are you happy now?" the Chavez supporters shouted as they ran through the streets with sticks. "Chavez is dead! You got what you wanted!"

Chavez's departure from a country he dominated for 14 years casts into doubt the future of his socialist revolution. It alters the political balance in Venezuela, the fourth-largest foreign oil supplier to the United States, and in Latin America, where Chavez led a group of nations intent on reducing U.S. influence in the region.

Chavez, 58, changed Venezuela in fundamental ways, empowering and energizing millions of poor people who had felt marginalized and excluded.

But Chavez's rule also widened society's divisions. His death is sure to bring more changes and vast uncertainty as the nation tries to find its way without its central figure.

The Venezuelan Constitution says that the nation should "proceed to a new election" within 30 days when a president dies, but there is some disagreement over who should take the helm in the meantime. The election itself is likely to pit Maduro, whom Chavez designated as his political successor, against Henrique Capriles Radonski, a young state governor who lost to Chavez in a presidential election in October. (Venezuela says election to be called within 30 days)

But there has been heated debate in recent months over clashing interpretations of the constitution, in light of Chavez's illness, and it is impossible to predict how the post-Chavez transition will proceed.

"We, your civilian and military companions, Commander Hugo Chavez, assume your legacy, your challenges, your project, accompanied by and with the support of the people," Maduro told the nation.

Only hours earlier, the government seemed to go into a state of heightened alert as Maduro convened a crisis meeting in Caracas of Cabinet ministers, governors loyal to the president and top military commanders.

Taking a page out of Chavez's time-tested playbook, Maduro warned in a lengthy televised speech that the United States was seeking to destabilize the country. He said the government had expelled two U.S. military attaches, accusing one of seeking to recruit Venezuelan military personnel. He called on Venezuelans to unite as he raised the specter of foreign intervention.

Chavez long accused the U.S. of trying to undermine or even assassinate him, using Washington as a foil to build support or distract attention from deeply rooted problems at home, like high inflation and soaring crime.

U.S. officials had hoped to improve relations under Maduro, with informal talks taking place last year. But more recently, the government has appeared to shift into campaign mode, taking sweeping aim at the Venezuelan opposition and playing up its real or alleged ties to the U.S. for political gain.

"We completely reject the Venezuelan government's claim that the United States is involved in any type of conspiracy to destabilize the Venezuelan government," Robert Ventrell, a State Department spokesman, said after the expulsion of the U.S. attaches. "Notwithstanding the significant differences between our governments, we continue to believe it important to seek a functional and more productive relationship with Venezuela."

Chavez was given a diagnosis of cancer in June 2011, but throughout his treatment he kept many details about his illness secret, refusing to say what kind of cancer he had or where in his body it occurred.

He had three operations from June 2011 to February 2012, as well as chemotherapy and radiation treatment, but the cancer kept coming back. The surgery and most other treatments were done in Cuba.

Then Dec. 8, just two months after winning re-election, Chavez stunned the nation by announcing in a somber televised address that he needed yet another surgery.

That operation, his fourth, took place in Havana on Dec. 11. In the aftermath, grim-faced aides described the procedure as complex and said his condition was delicate. They eventually notified the country of complications, first bleeding and then a severe lung infection and difficulty breathing.

After previous operations, Chavez often appeared on television while recuperating in Havana, posted messages on Twitter or was heard on telephone calls made to television programs on a government station. But after his December surgery, he was not seen again in public, and his voice fell silent.

Chavez's aides eventually announced that a tube had been inserted in his trachea to help his breathing and that, as a result, he had difficulty speaking. It was the ultimate paradox for a man who seemed never at a loss for words, often improvising for hours at a time on television, haranguing, singing, lecturing, reciting poetry and orating.

As the weeks dragged on, tensions rose in Venezuela, and the situation turned increasingly bizarre. Officials in Chavez's government strove to project an image of business as usual and deflected inevitable questions about a vacuum at the top. At the same time, the country struggled with an out-of-balance economy, troubled by soaring prices and escalating shortages of basic goods.

The opposition, weakened after defeats in the presidential election in October and elections for governor in December, in which its candidates lost in 20 of 23 states, sought to keep pressure on the government.

Then officials suddenly announced Feb. 18 that Chavez had returned to Caracas. He arrived unseen on a predawn flight and was installed in a military hospital, where he was continuing treatments, aides said.

During nearly a decade and a half, Chavez built a political movement and a government that were centered on his outsize personality.

He made most major decisions and dominated all aspects of political life. He inspired a fierce, sometimes religious devotion among his supporters and an equally fervent animus among his opponents.

As many of his followers say: "With Chavez everything, without Chavez nothing."

But that leaves his revolution in a precarious spot without its charismatic leader.

"In regimes that are so person-based, the moment that the person on which everything hangs is removed, the entire foundation becomes very weak because there was nothing else supporting this other than this figure," said Javier Corrales, a professor of political science at Amherst College.

Chavez's death could provide an opportunity for the political opposition, which was never able to defeat him in a head-to-head contest.

Capriles lost by 11 percentage points to Chavez in October. But he has twice beaten top Chavez lieutenants in running for governor of his state, Miranda, which includes part of Caracas.

And Maduro is far from having Chavez's visceral connection to the masses of Venezuela's poor. Even so, most analysts believe that Maduro will have an advantage and that he will receive a surge of support if the vote occurs soon after the president's death.

But even if Maduro prevails, he might have a hard time holding together Chavez's movement and furthering its socialist goals while fending off resistance from what is likely to be a revived opposition.

Chavez's new six-year term began Jan. 10, with the president incommunicado in Havana. In his absence, the government held a huge rally in the center of Caracas, where thousands of his followers raised their hands to pledge an oath of "absolute loyalty" to their commander and his revolution. Officials promised that Chavez would have his inauguration later, when he had recovered.

Promoted
Listen to the latest songs, only on JioSaavn.com
But the hoped-for recovery never came. Now, instead of an inauguration, Chavez's followers are left to plan a funeral. (Public funeral to be held on Friday)