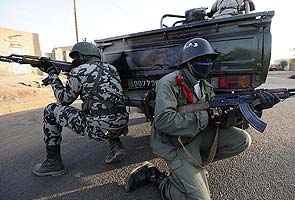 Malian troops told an sources correspondent that the sound of the blast appeared to have come from the north of Gao, possibly from the checkpoint at the city's northern entrance, the target of the suicide attacks on Friday and Saturday.

Sunday's gun battle launched by Islamist fighters on territory reclaimed by French-led forces was the first large-scale urban guerrilla assault of the conflict.

Rocket-propelled grenade explosions and fire from heavy machine guns and light weapons resounded late into the afternoon before dying down in the evening, when a power cut plunged the city into darkness.

Even after the fighting died down however, French and Malian troops expressed concern that some snipers might still be ensconced in the city.

One security source said several tens of insurgents had been involved in Sunday's fighting and a Malian army officer said a lot of Islamists had been killed, but AFP's journalists in the city were not able to verify this.

The fighting in the city started early in the afternoon when Malian soldiers clashed with Islamists in the centre of Gao, near an empty police station the rebels had used as their base until being driven from the city last month.

One witness said that after a fierce gun battle, French troops had intervened. He reported seeing one body, which he thought was probably a civilian caught in the crossfire.

Colonel Mamadou Sanake of the Malian army said the rebels had infiltrated the city by motorcycle and via the Niger River, which passes near the governor's offices.

MUJAO, one of the Al-Qaeda-linked groups that seized control of northern Mali for 10 months in the wake of a military coup in March 2012, claimed the attack and a suicide bombing Saturday, its second in two days.

French-led forces, backed by French air power, have over the last month driven the Islamist group from the cities that were once their strongholds.

Promoted
Listen to the latest songs, only on JioSaavn.com
But MUJAO has vowed to continue fighting French and government troops, using suicide attacks, land mines and raids such as the one on Sunday.