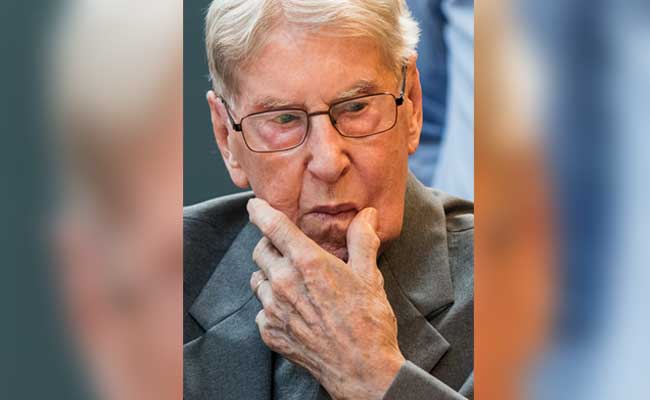 More than 70 years after World War II, Hanning was sentenced to five years' imprisonment over his role at the camp in Nazi-occupied Poland. (AFP Photo)

Detmold: A former SS guard was on Friday convicted by a German court for complicity in the mass murders at Auschwitz death camp, capping what is likely one of the last Holocaust trials.

More than 70 years after World War II, Reinhold Hanning, 94, was sentenced to five years' imprisonment over his role at the Nazi-run camp in occupied Poland.

"This trial is the very least that society can do to give... at least a semblance of justice, even 70 years after and even with a 94-year-old defendant," chief judge Anke Grudda said.

"The entire complex Auschwitz was like a factory designed to kill people at an industrial level... You were one of those cogs" in the Nazi killing machine, she told the accused on convicting him as an accessory to murder in 170,000 cases.

During the four-month trial, which involved witnesses giving harrowing accounts of the living hell they faced, prosecutors outlined how Hanning had watched over the selection of prisoners deemed fit for slave labour, and those sent to the gas chambers.

They also accused him of knowing about the regular mass shootings and the systematic starvation of prisoners.

For Holocaust survivors and inmates' descendants, the trial marked "a big, even though a late, step towards a just examination of the mass murders in Auschwitz".

This is because it for the first time focused on "the division of labour in the collective mass murders at Auschwitz," the plaintiffs said in a joint statement.

Unlike previous trials of officers who personally sent people to the gas chambers, this case covered the broader organisation of the extermination camp, where inmates were also starved to death or killed in summary executions.

"Mr. Hanning got a fair trial, and today's verdict is very clear: He was complicit in mass murder. He was part of a merciless killing machine. Without the active participation of people like him, Auschwitz would not have been possible."

Prosecutors had sought six years in prison on grounds that Hanning "contributed to the extermination aim of the camp", while his lawyers wanted an acquittal, saying he had not personally "killed, hit or abused" anyone.

In April, Hanning himself broke his silence, speaking for the first time about his time at Auschwitz in court.

Telling victims "I am sorry," he admitted to the court that he knew prisoners were being shot and gassed and that their bodies were burned at the camp.

He admitted being "silent all my life" about the atrocities because he felt deep shame, and had never spoken a word about it to his wife, children or grandchildren.

"No one in my family knew that I worked at Auschwitz. I simply could not talk about it. I was ashamed," said the white-haired, bespectacled widower, who ran a dairy after the war.

"I deeply regret having listened to a criminal organisation that is responsible for the deaths of many innocent people, for the destruction of countless families, for the misery, distress and suffering on the part of victims and their relatives.

"I am ashamed that I let this injustice happen and did nothing to prevent it," he told the court.
Comments
AuschwitzReinhold HanningAuschwitz SS Guard