Hong Kong, which has been rocked by massive anti-Beijing protests, turned away Albert del Rosario, who is a staunch China critic. 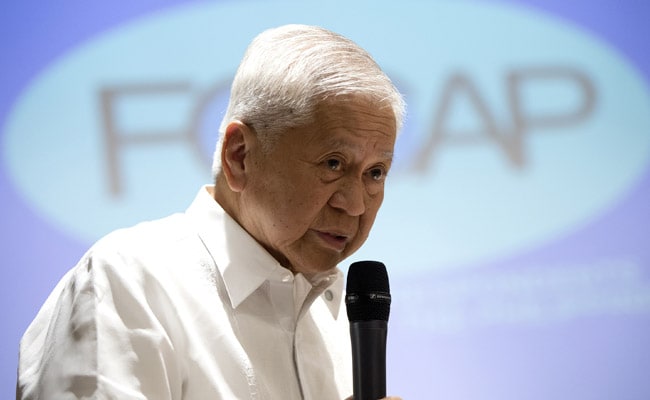 The Philippines said on Saturday its former foreign minister may have been denied entry into Hong Kong over his diplomatic passport, shying away from speculation he was barred for being a staunch China critic.

Hong Kong, which has been rocked by massive anti-Beijing protests in recent weeks, on Friday turned away Albert del Rosario, who has spearheaded legal moves against the Chinese government's bullish behaviour in the South China Sea.

Del Rosario, who served as foreign secretary from 2011 to 2016, tried to enter on a diplomatic passport before being held for more than three hours and put back on a plane.

His lawyer said authorities gave no reason for denying him entry.

But a Philippines' government spokesperson said there "might have been a problem with the use" of the passport.

"If you use a diplomatic passport it has to be an official engagement between the Philippines government and the country that you're entering," Martin Andanar told reporters Saturday on the sidelines of a Southeast Asia leaders summit in Bangkok.

"I'm not really sure what the activity... he was supposed to attend, if it was government or private," he added.

Andanar would not be drawn on whether del Rosario was barred from Hong Kong for political reasons, saying only "it's the right of any country to deny anyone".

Hong Kong immigration officials refused to comment on the case.

Del Rosario was granted a diplomatic passport in 2016, in line with Philippines law allowing certain former officials to use one if travelling on government duty.

But del Rosario earlier told reporters that he was in Hong Kong for a business meeting, and on Saturday the Philippines foreign ministry said it was revoking all diplomatic passports held by former foreign ministers and lower-level officials.

Speculation has mounted that del Rosario was turned away from Hong Kong because of his tough anti-China posturing.

He was behind a 2013 case at an international tribunal that ruled against Beijing's claim in the South China Sea.

In March he filed a complaint at the International Criminal Court against Chinese leader Xi Jinping, alleging "crimes against humanity" over the supposed environmental fallout of Beijing's activities in the disputed waters.

Hong Kong was handed over from Britain to China in 1997, though is still run independently under a "one country, two systems" arrangement.

But critics say Beijing has tightened its grip on the territory, and the financial hub has increasingly turned away China critics on arrival at the airport.

Philippines president Rodrigo Duterte has largely backed away from Manila's once-tense standoff with Beijing over its sweeping claims in the resource-rich South China Sea.

(Except for the headline, this story has not been edited by NDTV staff and is published from a syndicated feed.)
Comments
Hong KongAlbert del RosarioPhilippines government