"I believe I would defeat Donald Trump in a general election. But I am clear-eyed about the difficulty of winning the Democratic nomination in such a crowded field," Michael Bloomberg said. 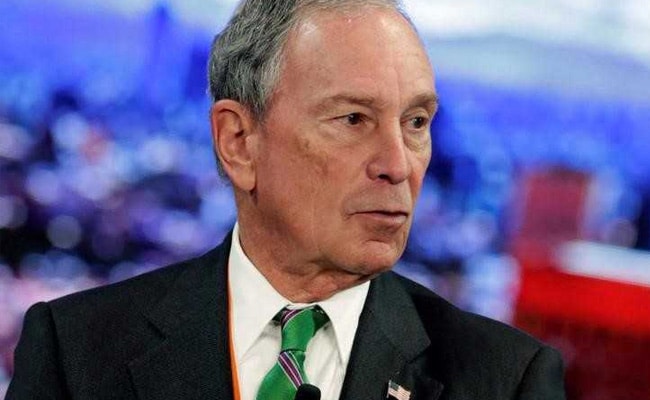 Former New York mayor Michael Bloomberg, the centrist billionaire Democrat who positioned himself as a potential challenger to Donald Trump, said Tuesday he would not run for president in 2020.

"I believe I would defeat Donald Trump in a general election. But I am clear-eyed about the difficulty of winning the Democratic nomination in such a crowded field," the businessman said in an opinion column on the Bloomberg media platform that he owns.

"Many people have urged me to run. Some have told me that to win the Democratic nomination, I would need to change my views to match the polls," the 77-year-old said, acknowledging the leftward tilt among many of the dozen major Democrats already in the race.

"I've run for office three times and won each time, in no small part because I've never stuck my finger in the wind to decide what I should believe. It's not who I am, nor do I think it's what voters want in a leader," he added.

Bloomberg said he would instead devote his considerable financial muscle toward addressing some of the nation's major challenges, including climate change, gun violence, the opioid crisis, failing public schools and college affordability.

"I love our country too much to sit back and hope for the best as national problems get worse. But I also recognize that until 2021, and possibly longer, our only real hope for progress lies outside of Washington," he said.

"And unlike most who are running or thinking of it, I'm fortunate enough to be in a position to devote the resources needed to bring people together and make a big difference."

His announcement brings an end to a potentially tantalizing 2020 matchup between two New York billionaire businessmen: the brash real estate tycoon currently in the White House versus the more measured -- and wealthier -- media mogul.

Bloomberg noted the importance of Democrats winning in 2020, describing Trump's presidential term as one of "chaos, disruption and deceit."

"I've never made any secret of my belief that Donald Trump is a threat to our country," he said, adding it was essential that Americans "nominate a Democrat who will be in the strongest position to defeat Donald Trump and bring our country back together."

All eyes on Biden

With Bloomberg now out of contention, attention turns to former vice president Joe Biden, who is the most prominent Democrat still mulling a presidential bid and has yet to announce his plans.

Former congressman Beto O'Rourke, the charismatic Texan who narrowly lost a Senate bid to incumbent Ted Cruz last year, is also a potential candidate, and says he will reveal his plans soon.

Bloomberg is the fourth potential candidate to pass on a presidential race this week.

Eric Holder, who served as US attorney general in Barack Obama's administration, said no on Monday, followed by Senator Jeff Merkley, who announced Tuesday he would run for re-election to the Senate instead of launching a White House bid.

Hillary Clinton, the 2016 nominee who lost to Trump despite winning the popular vote, finally ruled out a repeat run, prompting some presidential trolling.

"Aw-shucks, does that mean I won't get to run against her again?" tweeted Trump. "She will be sorely missed!"

Bloomberg sounded a warning to those challenging Trump, especially the several candidates including Sanders and Warren who have embraced progressive policies like universal health care and a massive plan to address climate change and economic inequality that critics say would cost tens of trillions of dollars.

"We cannot allow the primary process to drag the party to an extreme that would diminish our chances in the general election and translate into 'Four More Years'" of Trump, Bloomberg said.