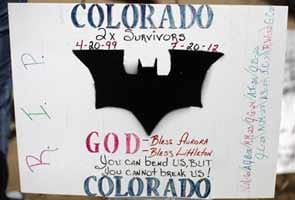 Centennial: Prosecutors are in court on Monday to outline their case against the young United States man suspected of shooting 12 people dead at a midnight premiere of the latest "Batman" film. The hearing, the first extensive public disclosure of the attack's details, will determine whether the case will go to trial.

James Holmes is charged with more than 160 counts in the Colorado attack, including murder and attempted murder. Investigators say he was wearing body armour and a gas mask when he tossed two gas canisters and opened fire in the theatre on July 20.

In addition to the 12 dead, 58 were wounded. Many survivors and family members of the dead were expected to attend the hearing.

Details of the case have been kept quiet. Three days after the shooting, District Judge William Sylvester forbade attorneys and investigators from discussing the case publicly, and many court documents have been filed under seal.

Police say Holmes, now 25, had stockpiled weapons, ammunition, explosives and body armour. He was a first-year student in a PhD neuroscience program at the University of Colorado, Denver, but he failed a year-end exam and withdrew, authorities have said.

Federal authorities have said Holmes entered the theatre with a ticket and is believed to have propped open a door, slipped out to his car and returned with his weapons. Police arrested him outside the theatre shortly after the shootings ended.

Legal analysts said today's hearing could set the stage for a negotiated plea agreement by allowing each side to assess the other's strength.

Holmes' mental health could be a significant issue in the hearing. His attorneys have told the judge Holmes is mentally ill, but they have not said whether they plan to employ an insanity defence. He had seen a university psychiatrist, and his lawyers have said he tried to call the psychiatrist nine minutes before the killing began.

Promoted
Listen to the latest songs, only on JioSaavn.com
Defence lawyers have said they plan to call at least two witnesses who could testify about Holmes' mental health. Prosecutors asked the judge to block the witnesses, but he refused.

Lawyers have been debating what physical evidence should be made available, whether a psychiatrist who met with Holmes is barred from testimony by doctor-patient privilege and other issues.