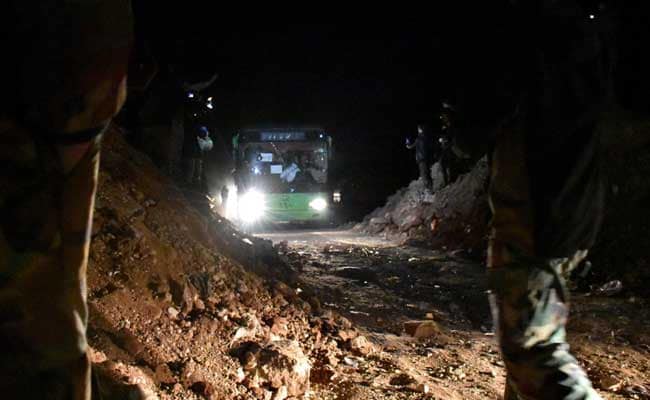 Pictures in the aftermath of the explosion showed with bodies lying on the ground. (Reuters)

Beirut: A car bomb in northern Syria killed more than 100 people Saturday when it ripped through buses evacuating residents from a town besieged by rebels for more than two years.

Syrian state television showed bodies strewn across the ground, the charred vehicles still packed with their passengers' possessions. By late afternoon, the road was lined with body bags.

The attack served as a bloody reminder of the human stakes for regional powers as they broker a complex population swap, moving some 30,000 Syrians between government- and rebel-held territory.

The buses had left the northern town of Fouaa on Friday as part of a long-awaited first phase of that agreement. Those on board had spent years under siege by extremist rebels, living in fear and without access to regular food or medicine.

Eyewitnesses to the attack said the air filled with screams as passengers, some of them on fire, staggered out of the cloud of dust.

A man who gave his name as Ali described watching a frail old woman stumble and fall. "We reached her too late, her leg had snapped and there was nothing we could do. What did she do to deserve this? She was just someone's mother."

The White Helmets rescue group said its volunteers had recovered more than 100 bodies from the wreckage, and that another 55 people had been injured. The death toll was expected to rise.

In one video from the site, a shaken reporter said the dead included civilians as well as rebel fighters from the area where the blast occurred. Using a cellphone camera to capture the devastation, his video showed the charred bodies of two small children dangling from vehicles.

There was no immediate claim of responsibility for the blast, and its implications for the broader transfer deal were unclear.

Overseen by Qatar and Iran, the negotiations had negligible input from the Syrian government, underscoring the extent to which President Bashar al-Assad has lost control in certain areas.

The population shift is an attempt to alleviate the hardships of residents in towns under siege by both rebel and government forces.

Each side has used the civilians it surrounded as bargaining chips to gain leverage over the other.

Some 2.3 million Syrians lived under complete siege or in areas at risk, according to Siege Watch, a Washington-based monitoring group.

Opposition officials have accused the Syrian government and its Iranian allies of using siege tactics to force demographic changes across the country, mostly along sectarian lines.

The mostly Shiite towns of Fouaa and Kefraya have been reliant on government airdrops since rebel forces cut their supply lines in May 2015.

Also part of the deal were the southern towns of Madaya and Zabadani. Madaya in particular had endured a siege so tight that dozens of people starved to death. Medics say others were killed by the snipers and land mines that surrounded the town.

Frustrations were already mounting among evacuees when Saturday's explosion occurred: Thousands of people from pro-government and opposition areas were stuck on opposite sides of the edge of Aleppo city as rebels and the government bickered over the terms for evacuating fighters.

The attack sent shock waves through Madaya's convoy, also traveling under the terms of the deal. Inside those buses, the rebels, activists and doctors warned that they could become "sitting ducks" in the face of retaliatory violence.

"Everyone is tense here; we feel like the attacks could start at any time," said one man, speaking on the condition of anonymity to protect the security of family members still in Madaya.

But by nightfall Saturday, the Syrian Observatory for Human Rights monitoring network reported that buses were crossing into government- and rebel-held territory from the two transit points as movements under the deal appeared to resume.

In footage broadcast by the Syrian state-owned al-Ikhbariya channel, a woman stood weeping outside the Aleppo hospital to which the dead and wounded had been taken.

"I know nothing of my family. I can't find them," she said.

Promoted
Listen to the latest songs, only on JioSaavn.com
Zakaria Zakaria in Istanbul and Suzan Haidamous in Beirut contributed to this report.