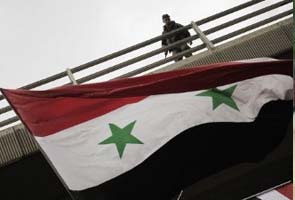 Beirut: The European Union may end this week either helping Syrian rebels or the Damascus government they detest, depending on how EU ministers resolve differences over a package of sanctions on Syria that is about to lapse.

At a meeting in Brussels on Monday, the main EU military powers, Britain and France, will argue forcefully for easing some of that embargo to help channel weapons to rebels fighting President Bashar al-Assad. But Austria, Sweden and several others will defend maintaining the sanctions across the board.

Failure to find a compromise could mean the entire package simply vanishes when it expires on Saturday, June 1 - London has already raised the stakes by threatening to veto a full renewal.

But it is unlikely the EU will offer such a shot in the arm to Assad by giving up on measures intended to cripple his government's ability to trade and raise money and also to curb the movements and personal wealth of his family and confidants.

EU officials see compromise - possibly by delaying an easing of the arms embargo until after peace talks or by limiting the types of weapon allowed and which rebel groups may receive them.

"The Brits are very keen to show they will take this quite far. Will they actually pull the trigger? Will they get rid of the entire apparatus of sanctions and asset freezes that this entails? I am not so sure."

The debate over the arms embargo has gained urgency because of recent military gains by Assad's troops against rebels whose political goal in ending the Assad dynasty's authoritarian rule the 27-nation European Union has endorsed diplomatically.

Opponents say taking a decision now to allow arms to be sent to the rebels could undermine next month's planned international peace conference, sponsored by the United States and Russia, and they are using this as an argument to extend the full embargo.

Britain and France say they have no immediate plan to arm the rebels but argue that easing the EU embargo would strengthen the hand of the West and the opposition in the negotiations.

Austria has warned that it could stop patrolling the U.N. ceasefire line on the Golan Heights between Israel and Syria if the EU arms embargo were lifted; Vienna says that the EU would be putting its troops at risk by making the European Union a military ally of one side in Syria's civil war.

While the rebels are receiving arms from Arab states through Jordan and Turkey, Western powers are concerned that Islamist militants fighting Assad could also use such weapons against them. The United States has also held back from supplying arms.

EU diplomats say four or five member states want the EU arms embargo renewed unaltered, though some of these would accept an extension of just a month or two to assess how the peace talks turn out. France has proposed easing the embargo immediately but making implementation conditional on a breakdown of the talks.

Italy was open to easing the embargo as long as there were controls on who would receive weapons, one EU diplomat said.

An EU official said compromise may involve proposed arms shipments being examined case by case or limitations on the type of weaponry made available, though that may be hard to enforce.

Promoted
Listen to the latest songs, only on JioSaavn.com
One senior EU official doubted there would any major change in the arms embargo directly after Monday's ministerial meeting. He said: "A prolongation of the current situation for a short period of time would seem the most likely outcome."