European Union To Britain: We're In Control Of Brexit Talks, Not You 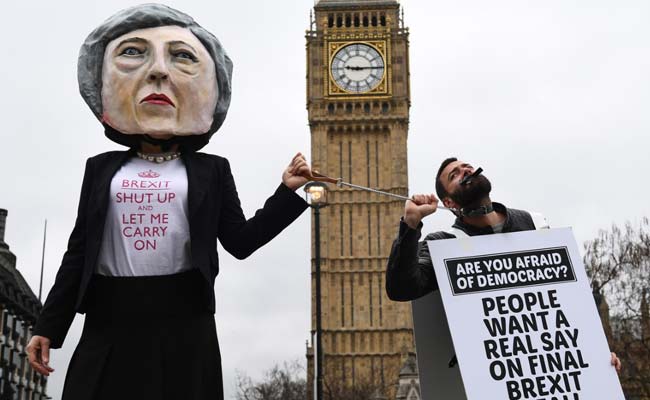 Theresa May had called for divorce talks and negotiations on new trade deal to proceed simultaneously.

London: Two days after Britain filed its divorce papers, the European Union made clear Friday that it will be the one to set the pace and terms of the talks.

In its first official response to Britain's letter announcing its exit, the EU's draft guidelines for the coming negotiations show that the bloc is willing to discuss a trade deal with Britain - but not until EU leaders feel that "sufficient progress" has been made in agreeing to the terms of separation.

British Prime Minister Theresa May - her eyes on the two-year countdown until the deadline for Britain's ultimate exit - had called for divorce talks and negotiations on a new trade deal to proceed simultaneously.

Speaking at a Malta press conference, European Council President Donald Tusk said the Brexit process will be "difficult, complex and sometimes even confrontational. There's no way around it."

He vowed that the EU's 27 jilted members will stick together in driving a tough bargain with Britain, one that won't allow the U.K. to claim a better deal than the one it has today.

The aim, he said, will be to preserve the integrity of the union and to protect the interests of the 440 million EU citizens left behind when Britain leaves. He stressed that the goal was not to punish Britain, but implied that the U.K. is sure to feel some pain.

Britain on Wednesday made official what its voters had decided in a referendum last June by triggering Article 50, the never-before-used mechanism for exiting the E.U.

May has said she wants a clean break with the union, one that leaves Britain outside the bloc's single market and free to set its own rules in critical areas like immigration. But she has also said she wants a free trade deal with the EU that preserves the U.K.'s preferred status with its most significant economic partner.

There's little time to make that happen - trade deals can take five years or more - and May wants the talks to begin as quickly as possible.

But the EU's stance, as revealed Friday, shows that it will be the one to determine when the two sides can move on from talking about their split and start discussing what comes next.

Before the trade talks can get underway, the EU wants to resolve thorny issues around the separation, including the amount of money that Britain owes the bloc based on past commitments and the status of EU citizens now living in the U.K.

Britain will have little choice but to follow Europe's timeline. Article 50 was written to discourage members from bolting, and its terms are weighted heavily in favor of the countries that remain.

A Downing Street spokesman, speaking on the customary condition of anonymity, said the EU's stance shows that "both sides wish to approach these talks constructively."

In his press conference, Tusk sough to defuse at least one issue that has already emerged as a possible source of contention.

May in her Wednesday letter had appeared to link trade and security assistance, suggesting that without a comprehensive deal "our cooperation in the fight against crime and terrorism would be weakened."

But Tusk said he knew May personally, and that he refused to believe she would withhold security assistance in a bid to gain leverage in trade talks. The whole thing, he insisted, was "a misunderstanding."

"Especially after the terrorist attack in London, it must be clear that terrorism is our common problem," he said. "That is why I rule out this kind of interpretation and speculation that security cooperation is used as a bargaining chip."

(Except for the headline, this story has not been edited by NDTV staff and is published from a syndicated feed.)
Comments
BrexitEU-UKTheresa MayBrexit impactBrexit analysisBrexit Talks