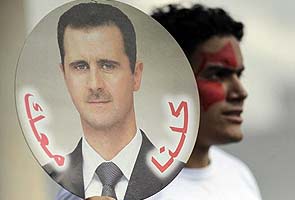 Vilnius/Paris: The European Union blamed the Syrian government on Saturday for an August 21 chemical weapons attack in Syria but urged waiting for a report from UN weapons inspectors before any US-led military response.

The carefully worded message from foreign ministers of 28 EU governments stopped short of endorsing possible US and French military action against Syria ahead of the report, which France's president said could come by the end of the week.

While their statement allowed France to claim victory in its push to get the EU to hold Syrian President Bashar al-Assad's government responsible for the attack in which more than 1,400 may have been killed, it also made clear the bloc wants the United Nations to play some role in deciding how to respond.

Many EU governments have expressed reservations about using military force to punish Assad, now fighting a 2-1/2-year battle against rebels in which more than 100,000 people have died.

Germany, where one opinion poll last Thursday showed 70 percent of people are against the United States bombing Syria, and other nations have opposed taking action before UN inspectors can present their findings.

Public debate has intensified in the United States and in Europe during the week since US President Barack Obama said he believed Washington should launch targeted air strikes on Syria to deter Assad, and others, from using chemical weapons but he would ask Congress for the authority to do so.

Obama made that decision after the British parliament voted against Britain taking part in a strike and US opinion polls showed significant opposition to one, suggesting that he would be somewhat isolated if he ordered military action on his own.

US officials hailed the EU statement as showing support for a US-led strike was growing but the EU stance also highlighted the doubts many nations have and the time it may take to convince them, if they can be convinced.

"A clear and strong response is crucial to make clear that such crimes are unacceptable and that there can be no impunity," EU foreign policy chief Catherine Ashton said, reading a statement reflecting the 28 nations' position.

"The EU underscores at the same time the need to move forward with addressing the Syrian crisis through the UN process," it added, saying the bloc welcomed French President Francois Hollande's surprise decision this week to wait for the report.

Hollande said the report could be made public at the end of next week and he suggested that France might then wish to take matter to the UN Security Council, a step that could further delay any action.

"When the (US) Congress will have voted on Thursday or Friday and when we will have the inspectors' report, likely at the end of the week, a decision will have to be made, including after possibly referring the matter to the United Nations (Security Council)," he said, speaking from the southeastern city of Nice after a meeting with his Lebanese counterpart.

An iFop poll published in daily Le Figaro on Saturday found that 64 percent of the French opposed any kind of international military intervention in Syria, up 19 percentage points in just one week, with even more - 68 percent - opposing a French intervention in the war-torn country.

On the Montmartre hill in Paris, several hundred Catholics prayed and fasted inside the Sacre Coeur Basilica. Chants in French and Arabic resonated under the whitewashed dome overlooking the city in one of dozens of vigils held across France on Saturday evening.

US Secretary of State John Kerry said he would convey the European desire to wait for the UN report to Obama but made clear that the US president was keeping his options open.

"Obviously this will be a point of discussion (and) we will take that decision under advisement, (but) the president has given up no rights of decision," Kerry told reporters at a news conference with French Foreign Minister Laurent Fabius.

After the EU agreement, Germany said it would sign a statement supported by 11 nations at the Group of Twenty summit in St. Petersburg, Russia, on Friday that backed a "strong" response to the alleged use of sarin gas against civilians.

Germany said it did not sign on Friday because it wanted to see an EU consensus on the issue first.

Ashton said the ministers meeting in the Lithuanian capital had agreed that information from a wide variety of sources "seems to indicate strong evidence" of the Syrian government's responsibility.

They EU ministers' statement, however, made no direct mention of military action that has been contemplated by the United States and France.

Promoted
Listen to the latest songs, only on JioSaavn.com
Kerry's Europe trip, which includes a stop in London, aims in part to bolster Obama's push to persuade US lawmakers to authorise a limited strike against Syria over the August 21 attack.

However, it is not clear when Congress may vote or whether it will give Obama a green light. Many lawmakers returning to Washington at the end of a summer recess say many constituents believe the United States should not respond militarily.
© Thomson Reuters 2013
Comments
Syria strike