Despite Theresa May's promise to be a 'bloody difficult woman', she is European Union's biggest hope for a smooth Brexit deal. 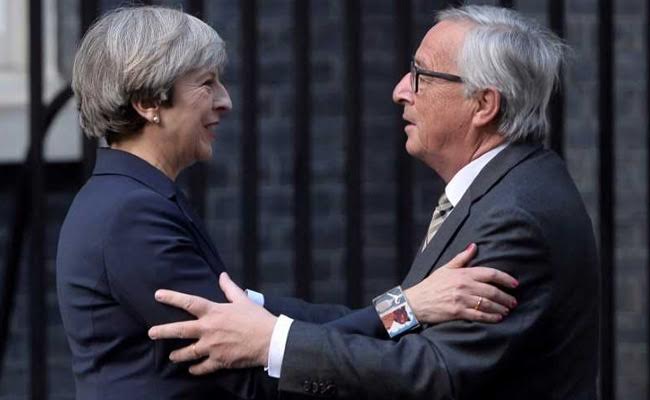 With a lot to lose, Jean-Claude Juncker will be following Thursday's UK election closely. (Reuters)

Brussels: EU leaders hope Theresa May is re-elected on Thursday, ideally with a bigger majority, even though the British prime minister has said this would help her drive a harder bargain on Brexit.

EU chief executive Jean-Claude Juncker will find her a "bloody difficult woman", May has said. Yet a drop in her Conservatives' lead caused concern in Brussels as they do not want her weakened nor do they want an anti-Brexit government.

A collapse in talks is the main risk for the European Union in the 22 months until Britain ceases to be a member. That would leave businesses and 3 million EU citizens in Britain in legal limbo, disrupting the economy. It could also leave Brussels billions of euros out of pocket and could delay a trade deal.

EU Brexit negotiators fear a 12-seat majority she inherited leaves May, who opposed Brexit, vulnerable to pressure from party hardliners who reject the EU demands and would rather she walk out without agreed divorce terms.

"We need a government strong enough to negotiate," said a senior EU lawmaker of talks that chief EU negotiator Michel Barnier expects to start on June 19. "We need a stable partner."

The strong majority that May hoped for when she called the vote, and which many senior EU figures still expect her to get, would give her leeway to anger some Conservatives by accepting the kind of compromises which Brussels argues will be necessary.

Barnier, bound by some aggressive negotiating guidelines set by the other 27 EU states, will seek British agreement to a host of guarantees for EU citizens living in Britain and to paying outstanding financial commitments estimated by Juncker at some 60 billion euros before opening any talks on a new trade deal.

May and Brexit Secretary David Davis, a veteran critic of the EU whose role in the talks after the election is unclear, have rejected paying a big "bill" or waiting for months before opening discussions on a post-Brexit EU-UK free trade agreement.

Brussels diplomats hope repeated threats that "no deal is better than a bad deal" is just tactics on May's part. With a new five-year mandate running to three years after Brexit, they hope she can sell a deal for Britain to transition out -- even if the pace and terms anger those want a quick departure.

Few European officials see May losing the vote outright or give much thought to a left-wing coalition under Labour's Jeremy Corbyn trying to halt or soften May's "clean break" approach to Brexit, for example by trying to stay in the EU single market.

Such an outcome, diplomats believe, could imperil the chances for an orderly divorce. The idea that a new government could try to reverse the referendum result is also unappealing to Brussels, where even Britain's traditional allies would rather see the back of a troublesome and internally divided partner than face more upheaval.

EU governments including Germany and France see Brexit talks as about damage control -- to the economy and to the political unity of the bloc. That means easing Britain out without drama while denying it benefits that may tempt others to follow suit.

The risk of talks collapsing increasingly worries some of those preparing to negotiate even if the official EU line is that such a scenario is highly improbable as it would mean mayhem for businesses and citizens on both sides but more for the British.

"There may hardly be any negotiations," said one EU official in strikingly gloomy mood. "They may just walk away."

Others in Brussels are less troubled and cite encounters with senior British officials they say recognise -- as May has done -- that Brexit will mean substantial costs for Britain.

Yet even as they quietly hope for a vote of confidence in May on Thursday, EU negotiators acknowledge that their theory that the prime minister is their best bet for a smooth Brexit has yet to be tested. She has given little away and done little to soften her image.

Andrew Duff, a former lawmaker from Britain's pro-EU Liberal Democrats, said in a European Policy Centre paper last week that the sides risk boxing themselves in: "If we go on like this," he wrote, "The probability is that the ... talks will fail."

(Except for the headline, this story has not been edited by NDTV staff and is published from a syndicated feed.)
Comments
Theresa MayTheresa May BrexitBrexitEuropean Unionukelection2017stories