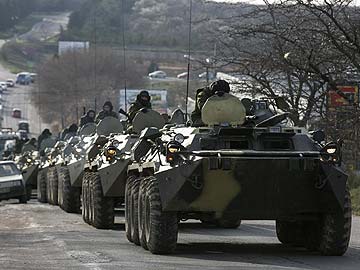 Soldiers, believed to be Russian, ride on military armoured personnel carriers on a road near the Crimean port city of Sevastopol.

Brussels/Simferopol, Ukraine: The European Union agreed on a framework on Wednesday for its first sanctions on Russia since the Cold War, a stronger response to the Ukraine crisis than many expected and a mark of solidarity with Washington in the drive to make Moscow pay for seizing Crimea.

US President Barack Obama warned Russia it faced costs from the West unless it changed course in Ukraine, and pledged to "stand with Ukraine" as he met with the country's new prime minister in Washington.

"We will never surrender," Ukrainian Prime Minister Arseny Yatseniuk vowed as he and Obama met in a White House show of support for the embattled leader.

"Mr. Putin - tear down this wall - the wall of more intimidation and military aggression," Yatseniuk told reporters in remarks aimed at Russian President Vladimir Putin and a reference to then-President Ronald Reagan's challenge to the Soviet Union in a 1987 speech at the Berlin Wall.

But Obama and Yatseniuk outlined a potential diplomatic opening that could give Russians a greater voice in the disputed Crimean region, where a referendum is scheduled for Sunday on whether it should become part of Russia.

Yatseniuk told a forum in Washington after his White House meeting that his interim government was ready to have a dialogue and negotiations with Russia about Moscow's concerns for the rights of ethnic Russians in Crimea.

Asked what a political solution would look like, Yatseniuk said: "If it is about Crimea, we as the Ukrainian government are willing to start a nationwide dialogue (about) how to increase the rights of (the) autonomous republic of Crimea, starting with taxes and ending with other aspects like language issues."

The EU sanctions, outlined in a document seen by Reuters, would slap travel bans and asset freezes on an as-yet-undecided list of people and firms accused by Brussels of violating the territorial integrity of Ukraine.

German Chancellor Angela Merkel said the measures would be imposed on Monday unless diplomatic progress was made.

A Russian stock index dropped 2.6 percent and the central bank was forced to spend $1.5 billion to prop up the rouble as investors confronted the prospect that Russia could face unexpectedly serious consequences for its plans to annex Crimea.

Russian troops have seized control of the Black Sea peninsula, where separatists have taken over the provincial government and are preparing for Sunday's referendum, which the West calls illegal.

The measures outlined by the EU are similar to steps already announced by Washington, but would have far greater impact because Europe buys most of Russia's oil and gas exports, while the United States is only a minor trade partner. The EU's 335 billion euros of trade with Russia in 2012 was worth about 10 times that of the United States.

The travel bans and asset freezes could cut members of Russia's elite off from the European cities that provide their second homes and the European banks that hold their cash.

The fast pace of Russian moves to annex Crimea appears to have galvanized the leaders of a 28-member bloc whose consensus rules often slow down its decisions.

Merkel herself had initially expressed reservations about sanctions but has been frustrated by Moscow's refusal to form a "contact group" to seek a diplomatic solution over Crimea.

"Almost a week ago, we said that if that wasn't successful within a few days, we'd have to consider a second stage of sanctions," Merkel said. "Six days have gone by since then, and we have to recognize, even though we will continue our efforts to form a contact group, that we haven't made any progress."

In Crimea, the regional government is led by a Russian separatist businessman whose party received just 4 percent of the vote in the last provincial election in 2010 but who took power on February 27 after gunmen seized the assembly building.

Preparations for Sunday's referendum are in full swing. Banners hang in the center of Crimea's capital, reading: "Spring - Crimea - Russia!" and "Referendum - Crimea with Russia!"

A senior Russian lawmaker on Wednesday strongly suggested that Moscow had sent troops to Crimea to protect against any "armed aggression" by Ukrainian forces during the referendum. Putin and other Russian officials have said armed men who have taken control of facilities in Crimea are local "self-defense" forces.

Crimea has a narrow ethnic Russian majority, and many in the province of 2 million people clearly favor rule from Moscow. Opinion has been whipped up by state-run media that broadcast exaggerated reports of a threat from "fascist thugs" in Kiev.

"Enough with Ukraine, that unnatural creation of the Soviet Union, we have to go back to our motherland," said Anatoly, 38, from Simferopol, dressed in camouflage uniform and a traditional Cossack fur cap.

But a substantial, if quieter, part of the population still prefers being part of Ukraine. They include many ethnic Russians as well as Ukrainians and members of the peninsula's indigenous Tatar community, who were brutally repressed under Soviet rule.

"Crimea has been with Ukraine since the 1950s, and I want to know how they will cut it off from what was our mainland," said Musa, a Tatar. "If the referendum is free and fair, at least a little bit, I will vote against Crimean independence."

The referendum seems to leave no such choice: Voters will have to pick between joining Russia or adopting an earlier constitution that described Crimea as sovereign. The regional assembly says that if Crimea becomes sovereign, it will sever ties with Ukraine and join Russia anyway.

Still, with the streets firmly in control of pro-Russian militiamen and Russian troops, there is little doubt the separatist authorities will get the pro-Russian result they seek. Many opponents, including Tatar leaders, plan a boycott.

At the White House, Obama ridiculed the referendum, saying: "The issue now is whether Russia is able to militarily dominate a region of somebody else's country, engineer a slapdash referendum and ignore not only the Ukrainian constitution but a Ukrainian government that includes parties that are historically in opposition with each other."

"We will continue to say to the Russian government that if it continues on the path that it is on, then not only us but the international community, the European Union and others will be forced to apply a cost to Russia's violation of international law and its encroachments on Ukraine," he added.

Obama said the United States and Ukraine recognized the historic ties between Russia and Ukraine, but added: There is a constitutional process in place and a set of elections that they can move forward on that in fact could lead to different arrangements over time with the Crimean region.

"But that is not something that can be done with the barrel of a gun pointed at you," Obama said.

Yatseniuk said his government was eager for talks with Russia about Ukraine but made clear his country "is and will be a part of the Western world."

While tightening his grip on Crimea, Putin seems to have backed off from his March 1 threat to invade other parts of eastern and southern Ukraine, where most of the population, although ethnically Ukrainian, speak Russian as a first language.

That threat exposed the limits of Ukraine's military, which would be little match for the superpower next door and has seen its detachments in Crimea surrounded. The authorities in Kiev announced the formation of a new national guard on Wednesday.

But if Putin had expected to be able to seize Crimea without facing any consequences - as he did when he captured parts of tiny Georgia after a war in 2008 - the push toward sanctions suggests he may have miscalculated.

In a statement, the leaders of the G7 - the United States, Britain, France, Germany, Italy, Japan and Canada - called on Russia to stop the referendum from taking place.

"In addition to its impact on the unity, sovereignty and territorial integrity of Ukraine, the annexation of Crimea could have grave implications for the legal order that protects the unity and sovereignty of all states," they said. "Should the Russian Federation take such a step, we will take further action, individually and collectively."

The US Senate Foreign Relations Committee approved legislation that would impose strict sanctions on Russians involved in the intervention in Ukraine and provide aid to the new government in Kiev. The bill now goes to the full Senate for a vote and must also be approved by the House of Representatives.

There has been a lot of diplomatic contact between Russia and the West but no breakthrough. Putin spoke on Wednesday to French President Francois Hollande and Swiss Foreign Minister Didier Burkhalter, whose country chairs the Organization for Security and Cooperation in Europe. US Secretary of State John Kerry is due to meet with Russian Foreign Minister Sergei Lavrov in London on Friday.

Russia has pledged to retaliate for any sanctions, but EU leaders seem to be betting that Moscow has more to lose than they do. Merkel's finance minister, Wolfgang Schaeuble, said any potential impact on Germany's economy was likely to be limited.

While the EU has agreed to wording for its sanctions, it is still working on a target list. Talks took place in London this week between officials from Britain, the United States, Italy, France, Germany, Poland, Switzerland, Turkey and Japan.

"My understanding is that there was detailed discussion of names at the meeting," an EU official said. "No definitive list has been drawn up, but it will be ready by Monday."

European officials have indicated that Putin and Lavrov will not be on the list, in order to keep channels of communication open. The list is expected to focus on targets close to Putin in the security services and the military, as well as lawmakers.

Promoted
Listen to the latest songs, only on JioSaavn.com
In the past, US and EU sanctions against countries such as Syria, Libya and Iran have started with lists of only around 20 people and companies. But those lists quickly evolved into more powerful weapons as other people and firms were added.

The EU has said it is also prepared to take further steps, such as an arms embargo and other trade measures.
© Thomson Reuters 2014
Comments
RussiaVladimir PutinUkraineEuropean UnionMoscowGermanyBarack Obama