Endangered Panthers Seen Stumbling As If Poisoned. No One Knows Why

The Florida Fish and Wildlife Conservation Commission is using trail cameras to monitor the cats on trail cameras. 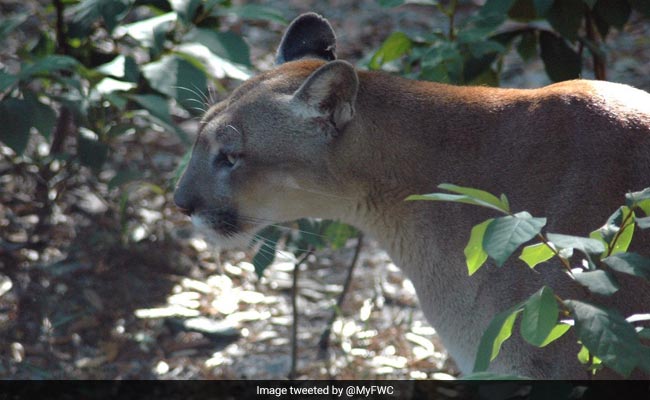 At least 10 panthers and bobcats in Florida are having (or had) trouble walking.

A mother panther walks into frame and pauses. She looks around, ears alert. One of her cubs appears and looks healthy and strong. Then her other cub stumbles into the frame and falls to the ground. The young cat doesn't have full control of its hind legs - as if a neurological disease, or even poisoning, is making the cub dangerously sick and vulnerable to attack.

At least 10 panthers and bobcats in Florida are having (or had) trouble walking, and wildlife experts don't know why. Two cats died recently from other causes, but scientists confirmed that they, too, were suffering from whatever is going around. The Florida Fish and Wildlife Conservation Commission is using trail cameras to monitor the cats on trail cameras.

The list of possible panther and bobcat afflictions is long. Researchers are testing for infectious diseases, nutritional deficiencies, exposure to heavy metals and toxins including rat poison and toxic algae.

The FWC conducts necropsies - autopsies for animals - even if they already know the cause of the panther's death, according Mark Cunningham a veterinarian at the commission. On Wednesday, researchers examined the two dead cats and tested for toxins and contaminants. The bobcat was injured during a fight and subsequently was hit by a vehicle. The panther was euthanized after she was injured by a vehicle and contracted an infection, according to Cunningham.

The scientists took tissue samples from the deceased panther and bobcat, to better understand what might have caused the damage in their nervous systems.

"Our veterinarian staff have submitted samples to specialized laboratories," said Michelle Kerr, a spokeswoman at the FWC's Wildlife Research Institute. Neither of the animals tested positive for feline leukemia, Kerr said, a disease that has killed members of the endangered species.

Trail camera footage also showed eight other panthers, most of them kittens, and an adult bobcat with similar symptoms. The affected cats have been observed in Collier, Lee and Sarasota counties. At least one potentially affected panther was photographed in Charlotte County.

Florida panthers are an endangered species. They've slowly come back after development and habitat destruction cut their numbers down to 20 wild panthers at the end of the 20th century. Today, the FWC estimates that there are between 120 and 230 adult panthers living in southern Florida.

Samantha Wisely, a professor of wildlife ecology at the University of Florida, who is not involved with the current research on the affected bobcats and panthers, said big cats can pick up infectious diseases in a variety of ways.

Panthers can get diseases from preying on other animals that might have a disease, or they can drink contaminated water. But since the causes of the disease could be numerous, Wisely said it's important to look at multiple possibilities.

"When you don't have a good sense of what it is, you really want to cast your net widely," she said.

The scientists at the FWC are also looking at whether a common rat poison, bromethalin, might have played a role in the neurological damage. The EPA says individuals should always remove the dead rodents immediately after they are killed by rodenticides.

Another cause of the cat's condition might be toxic algae, according to the FWC. This summer, toxic algae killed three dogs after they played in a North Carolina pond. The toxins released by the algae have recently led to the deaths of marine animals in Florida and elsewhere along the Gulf Coast.

"Numerous diseases and possible causes have been ruled out; a definitive cause has not yet been determined," Gil McRae, director of the FWC's Fish and Wildlife Research Institute, said in a statement. "We're working with the U.S. Fish and Wildlife Service and a wide array of experts from around the world to determine what is causing this condition."

Researchers are calling on the public to help identify more panthers that might be potentially showing signs of the condition. The FWC is asking people to upload trail camera videos that show any cat activity, and to call and report any that are seen injured or dead.

(Except for the headline, this story has not been edited by NDTV staff and is published from a syndicated feed.)
Comments
pantherFlorida