What's it like to ride through Elon's tunnel? Bumpy, but that's all part of the ride on a Musk enterprise. 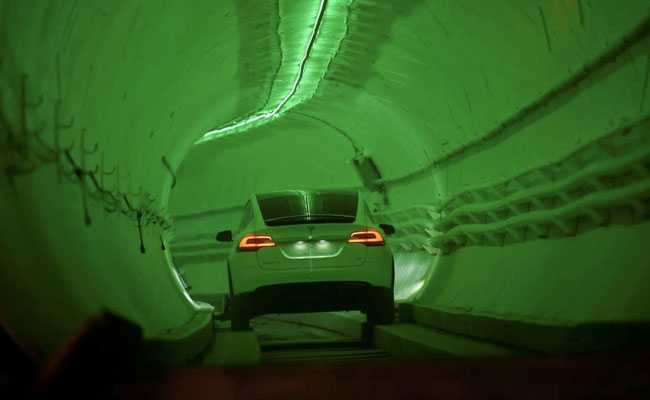 The tunnel, measuring 12 feet in its inner diameter, runs about 40 feet underneath a road (Reuters)

For Elon Musk's very difficult year, there's a light at the end of the tunnel.

Specifically, it's a 1.14-mile tunnel the inventor and beleaguered CEO of Tesla Motors says is a first step in solving "soul-destroying" urban traffic. In 2016, Musk - already busy running two high-profile companies - founded a firm called the Boring Company to tackle the problem by drilling underground. Some thought it was a joke. Two years of big promises and $40 million of Musk's own money later, his just-in-time innovation machine delivered a functioning test tunnel on Tuesday.

What's it like to ride through Elon's tunnel? Bumpy, but that's all part of the ride on a Musk enterprise.

I had the chance to zip through in a Tesla Model X at a launch event that was part Musk pep rally and part amusement park ride. The tunnel, measuring 12 feet in its inner diameter, runs about 40 feet underneath a road alongside the headquarters of SpaceX, another Musk venture located in this Los Angeles suburb. It's just wide enough to fit a single car, which makes its way down to the tunnel through an elevator.

Our elevator was hidden in the back lot of what had formerly been the Los Vegas Kitchen Cabinets store, but is now a well-camouflaged Boring building protected by armed guards. After we pulled through a gate into a platform about the size of two standard parking spaces, the ground dropped beneath us through a circular opening until we were facing the entrance to the tunnel. Batman would have been jealous.

My test Tesla had been modified with an additional set of guide wheels - sticking out in front like a pair of ears. Those aligned with the edges of the tunnel, turning the consumer electric SUV into a kind of rail-guided train.

Once a light at the front of the tunnel turned green, the car was off like a roller coaster. The proximity to the tunnel walls made it seem like it was going much faster; white paint and blue lighting along the top of the tunnel made the ride feel more like a music video than Batman's cave.

The Tesla, which has autonomous capabilities, did much of the driving itself - navigating curves and adjusting its speed while locked with those alignment wheels - but there was still a trained driver behind the wheel. 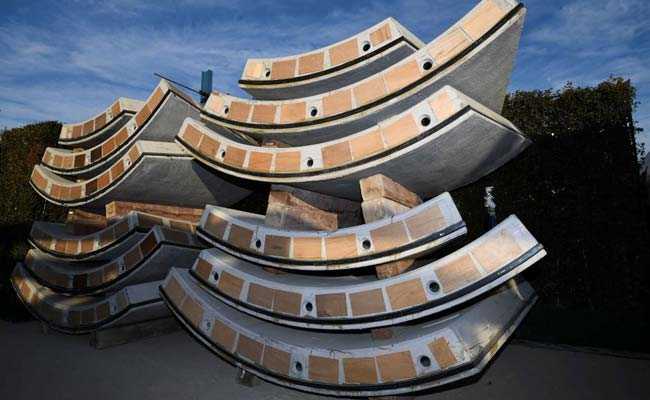 Concrete segments for the tunnel are displayed before an unveiling event for the Boring Company test tunnel in Hawthorne, California (Reuters)

Despite the automation, the experience was turbulent. The car jostled with many bumps in the concrete along the bottom of the tunnel, even though our top speed reached just 49 miles per hour.

In a press briefing, Musk said the Boring Co. had run out of time to smooth out the test tunnel's concrete base, which caused the bumpy ride. (Musk had originally promised to open the test tunnel last week.) Once the Boring Co figures out how to efficiently smooth the concrete, Musk said vehicles could go through the tunnel at up to 155 miles per hour.

The alignment wheel system is an about-face on the mechanism Musk had originally said would allow vehicles to travel through his tunnels at high speed. He had touted cars inside Boring tunnels would sit on electric skates. But Musk said alignment wheels are less expensive, and can be adapted to more kinds of cars - so long as those cars are electric and have autonomous capabilities.

What makes the electric car pioneer and rocket inventor an expert in drilling? Musk thinks Boring can lower the cost of tunneling projects while also significantly increasing their speed through some relatively simple changes to the way typical tunneling machines work. "No Nobel Prizes needed here," he said. 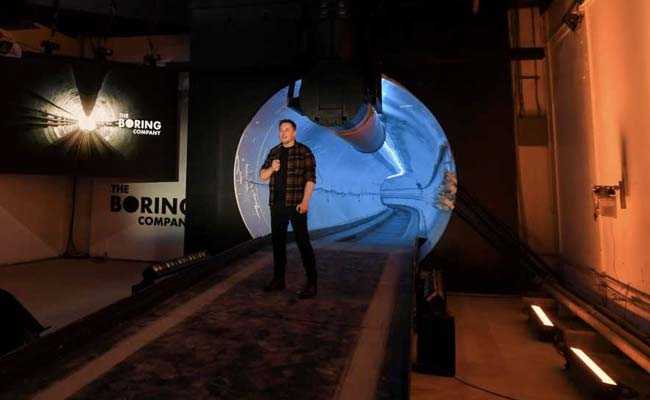 Boring's tunnel transport, dubbed the Loop, hopes to alleviate traffic because cities would have dozens of tunnels on top of each other. Unlike a traditional subway or train system, Musk said the Loop's main arteries won't make frequent stops. Instead, they'd have a series of tributaries that would take people to local destinations with their own elevators to take vehicles up to the street.

The cost of a ride? To be determined, but Musk said he'd like it to be about $1 for a ride in a shared public transit car that zipped through the tunnel, or $4 for a private car.

Boring is working on plans to construct a tunnel to Dodger Stadium in Los Angeles and another connecting downtown Chicago to O'Hare airport. The company also wants to make a tunnel connecting Washington, District of Columbia, to New York City.

Musk said interest from cities and would-be investors has been high. But it's not all been smooth digging: Last month, Boring withdrew another project underneath Los Angeles' Sepulveda Boulevard after community groups sued the government over plans to exempt the company from an environmental review process.