Sisi took the oath in a packed house and in front of members of his government, after winning 97 percent of votes in the March presidential election. 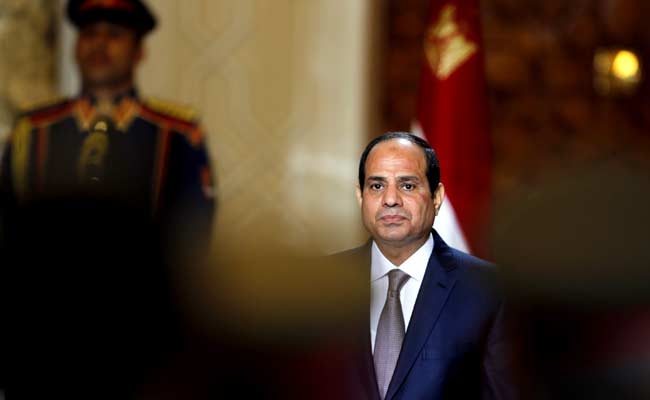 Abdel Fattah al-Sisi was sworn in on Saturday for a second four-year term.

Cairo: Egyptian President Abdel Fattah al-Sisi was sworn in on Saturday for a second four-year term in office as the country faces major economic and security challenges.

Sisi took the oath in a packed house and in front of members of his government, after winning 97 percent of valid votes in the March presidential election.

Fighter jets drew an Egyptian flag in the sky above Cairo while military helicopters flew over the capital's centre as the president made his way to parliament -- where he was greeted with a 21-gun salute.

Sisi, who as army chief ousted Egypt's first freely elected president Mohamed Morsi after mass street protests in 2013, won his first term in 2014 with an overwhelming majority of the vote.

He faced no serious competition in his run for re-election.

His only opponent, Moussa Mostafa Moussa, was relatively unknown and a fervent Sisi supporter himself.

All other political contenders were either sidelined or withdrew.

Seven years after the January 2011 uprising that toppled Hosni Mubarak's regime, Sisi will have two major challenges to tackle in his second term: security and economic recovery.

Many of his opponents and vocal members of civil society have been arrested in recent months.

Two of those arrested are blogger and journalist Wael Abbas and Shadi Ghazali Harb -- one of the youth leaders during the 2011 revolution.

They also include Hazim Abdelazim, who has described his decision to head the youth committee of Sisi's successful 2014 presidential bid as his "biggest mistake".

(Except for the headline, this story has not been edited by NDTV staff and is published from a syndicated feed.)
Comments
Egypt PresidentAbdel Fattah al-Sisi